On The Cover of The Rolling Stone


Like all good rock fans in their teens, I subscribed to Rolling Stone starting in 1976 when I was 17.
The Beatles, in various forms, hold the record for being on the cover 30 times, but The Grateful Dead and specifically Jerry Garcia hold a cool 18.

This are the covers of the Grateful Dead: 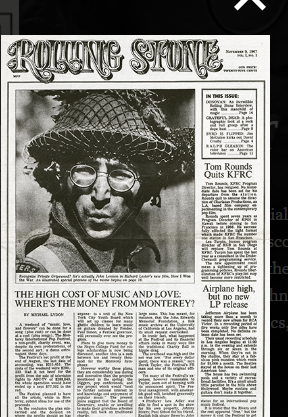 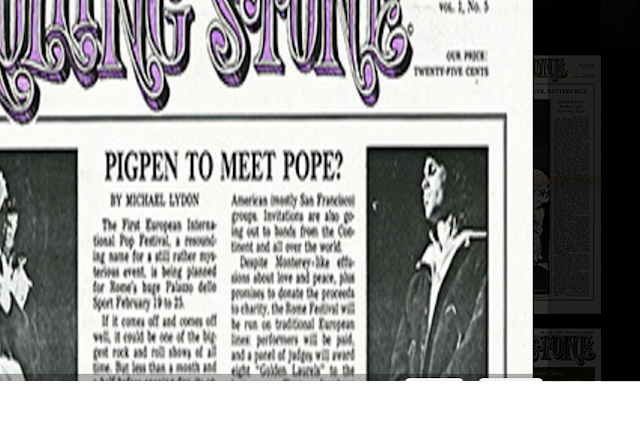 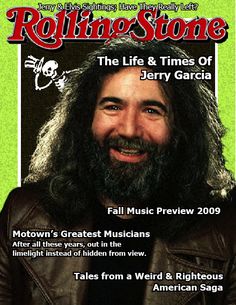 Email ThisBlogThis!Share to TwitterShare to FacebookShare to Pinterest
Labels: Writing

Of course we all went for the Jam  Top 31 (I'll Get to this someday), but what really punched up a show for me was The Middle, the part where they would play a really great Rooster, or Althea or Bird Song and then close out the first set with an amazing little ditty like China>Rider or The Music Never Stopped. Then after a "short break", the band would launch into Scarlet>Fire or Shakedown or Help on the Way>Slipknot!>Franklin's Tower.
This is what I have decided to call The Middle, the end of side two of tape one of the show, and the beginning of side one of tape two.  (Click below for best viewing) 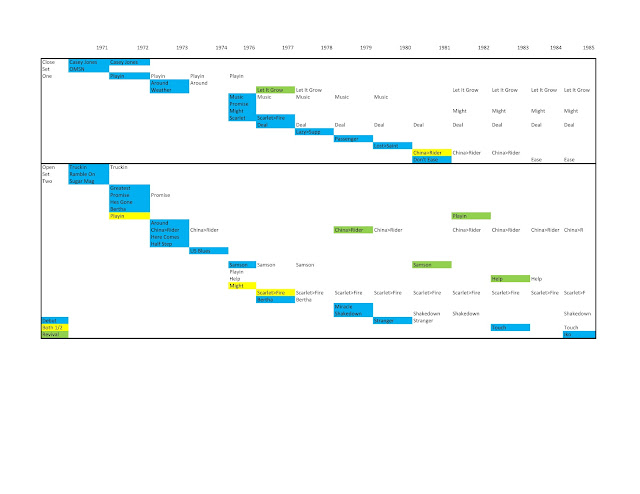 Here's a great example from May 8, 1977 where The Middle would be
Dancin' in The Streets/Scarlet Begonia/Fire on The Mountain:

Even Estimated was often a part of The Middle in early 77. This is the kind of thing, I pull together if I have a 50 minute commute from Pasadena to West LA and I need to relax. You know what I mean. 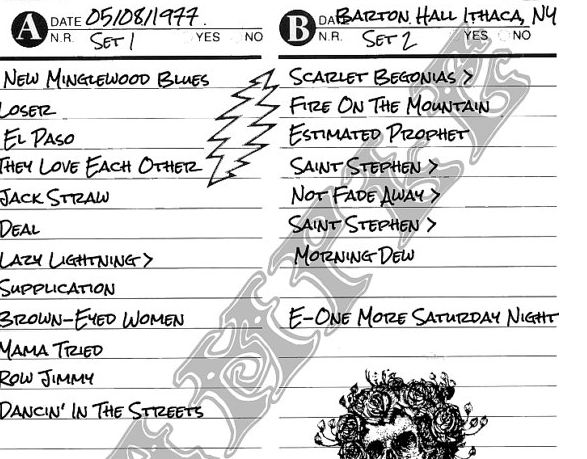 Some of my personal favorite Middles from my own shows are:

August 2, 1976 Colt Park  Lazy Lighting>Supplication caps the 14 song first set followed by the only Might As Well>once-only Might jam>Samson & Delilah

May 7, 1977 Boston  Blazing Versions of The Music Never Stopped followed by Terrapin>Samsons

September 2, 1978 Giant's Stadium After my first Miracle and A great Peggy-O, we get  Lazy Lightnin'> Supplication  and Good Lovin' followed by Dick's favorite  Scarlet Begonias > Fire On The Mountain

September 12, 1981 Berkeley "The Perfect Middle" of China>Rider  following by Scarlet >Fire was only played 5 times  (my show was the middle of the five) :

Some of my others favs that I saw

I love The Middle and I hope you do too.  The Middle often contains the best stage banter and Take A Step Backs. The chart below tracks the evolution of these tunes from 1971 to 1985.  I was very lucky to live through the golden era from 1976-1981 as the band annually would add new tune by new tune to The Middle like The Music Never Stopped,  Scarlet>Fire, Let It Grow, Help>Slip>Franklin's, Lazy Lightning>Supplication, Shakedown, Feel Like A Stranger, Lost Sailor>Saint of Circumstances.

Double click the chart below to see the whole thing

I flashed upon December 26, 1980 more than 100 posts ago in post #2  http://gratefulseconds.blogspot.com/2015/01/east-to-west-grateful-dead-live-at.html but when GEMS put up an upgraded soundboard of this up on Lossless Legs yesterday, I felt I had to speak now to my 43rd show (out of 80, so just over the midpoint of my Grateful Dead Journey), but only my 5th show in California, the promised land.  I have to say the recording and the performances are just superb. Make sure to listen.

There is a lot to love about this show. Obviously, the SBD is fantastic.
There is a nice Stranger opener followed by a nice 1980 Sugaree>Minglewood, high quality LLR and The Music Never Stopped. And the second set is no slouch, with China>Rider, Estimated>Eyes>Jam, and a nice closing sequence of Space>The Wheel>truckin>Wharf Rat>GDTRFB>Saturday Night.
Enjoy!

A funny sidenote is that years later, Sons of Anarchy showrunner Kurt Sutter decided to give the character Juice a nice 12/27/80 tattoo.  Considering the fact the show takes place in the East Bay, it makes you wonder....  Such is the world of bike clubs and San Francisco rock bands of a certain era. 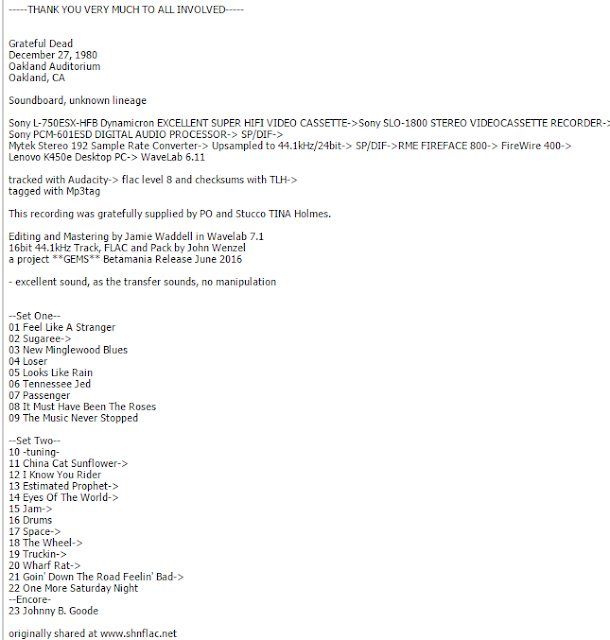 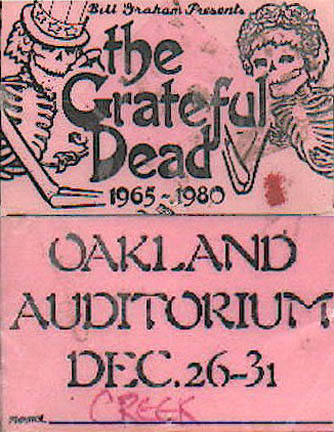 Jerry Garcia and Merl Saunders started playing together about February 2, 1971, but prior to that Merl had an interesting gig with Muhammed Ali.

This past weekend, I watched an HBO partial documentary on the champ that centered around his battle with the US Supreme Court. In that, I saw Ali dressed for a 1969 Broadway production, which I just learned was called Big Time Buck White. And the musical director of this was none other than Merl Saunders.

You might have know this, JGMF obviously knew and LIA but not me. And after the sad death of the Champ, this made me smile. 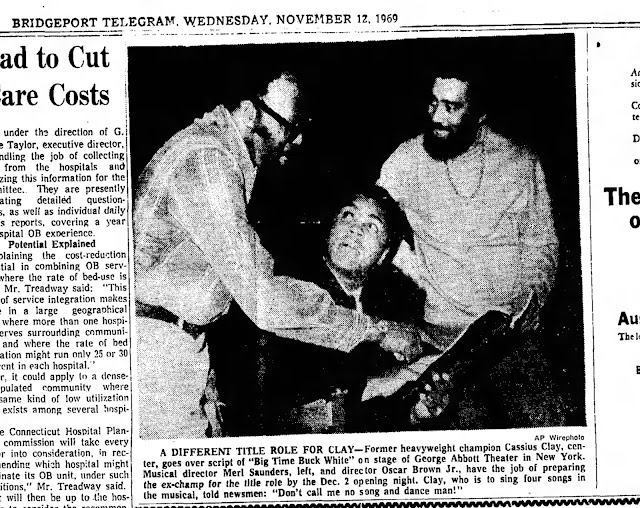 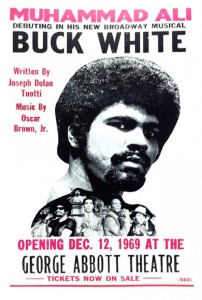 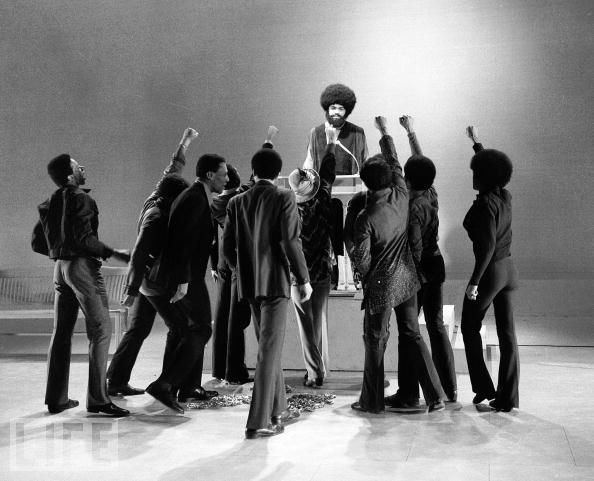 Email ThisBlogThis!Share to TwitterShare to FacebookShare to Pinterest
Labels: JGB

Indiana is still on my mind from the nice Dead & Company show the other night. Time to check the wayback machine 25 years to June 6, 1991 at Deer Creek.  (thanks to Steve Ulman for math skills)

As you can see, the Grateful Dead were much more popular in 1990s with the top-2 May, 1991 concert stands at Shoreline and Cal Expo.

Great coverage of the scene and the show in the local Indy Star paper, even a review with the setlist!
I expect the next night 6-7 was better since it has four songs reach the Tapers Section and got 8 votes for show of the year for 1991 in DeadBase 11.  Enjoy the look back and the music 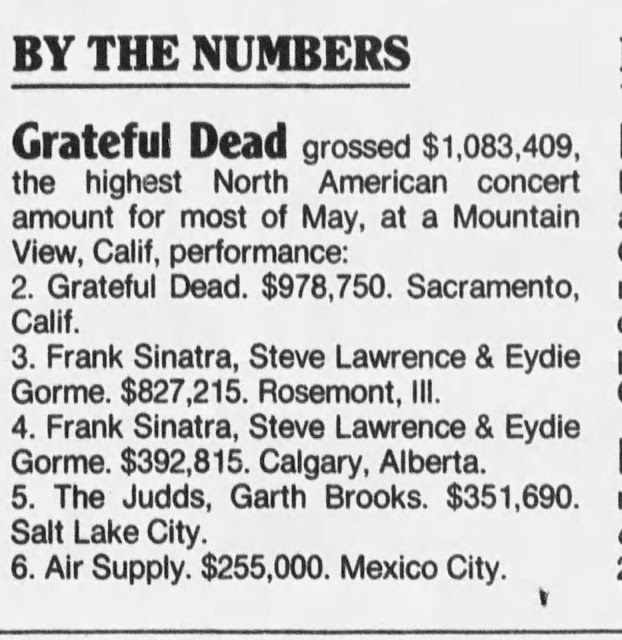 Indiana was happy to see the boys again, as the boys brought the scene, and the fans, who were becoming older and thus had more cash to send. The Indy Star welcomed the fans to come and spend their money right here in Indiana. 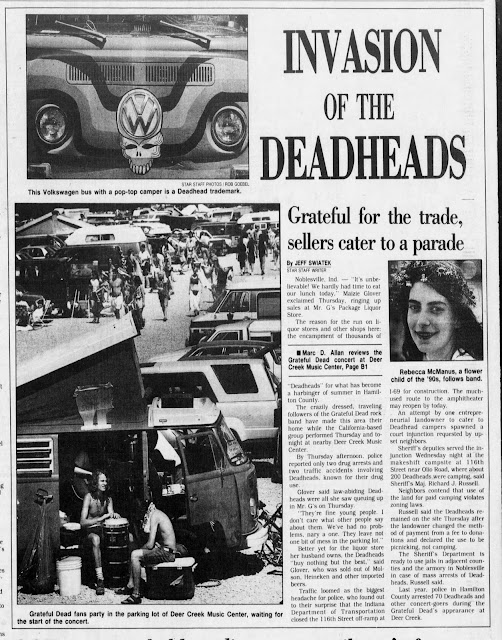 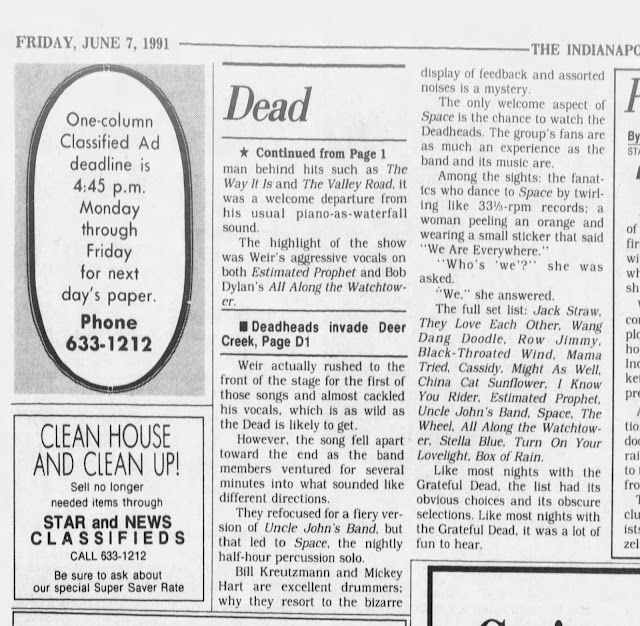 30 Years Ago: Jerry Garcia and I Both See Bob Dylan and Tom Petty at the Greek

Unfortunately. Jerry saw June 14, 1986 and I saw the night before. You can hear it here

This was right before a few combined shows, that unfortunately fell in the Garcia 1986 health problems. The 1987 shows, sans Petty, were much stronger. 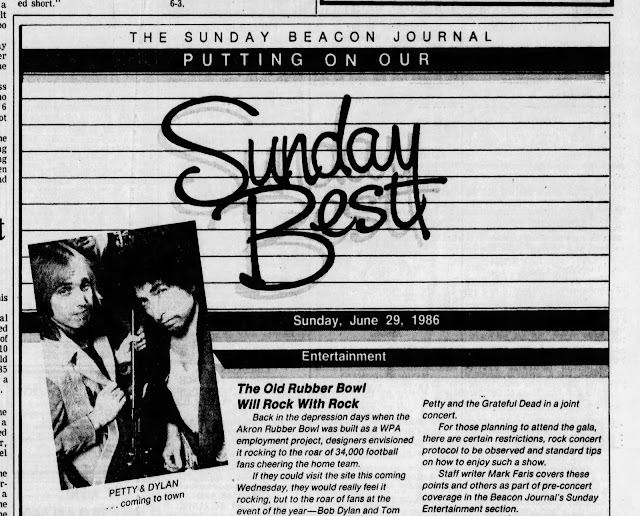 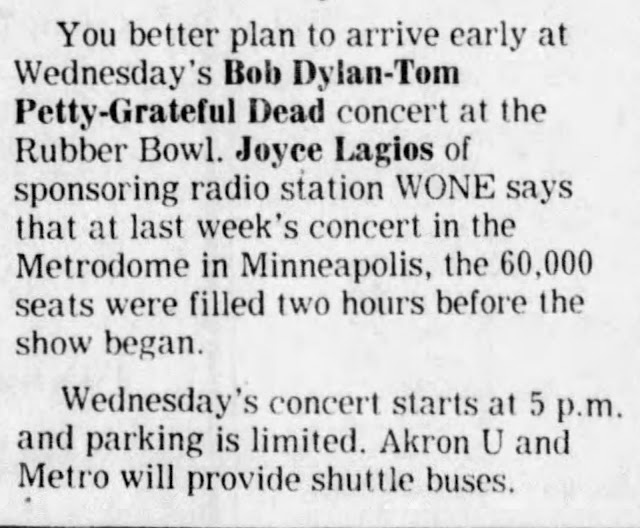