Wish We Had A Joint So Bad: Big Star open for Badfinger Cambridge Performance Center March 31, 1974 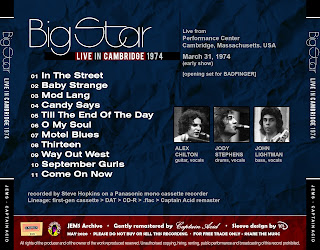 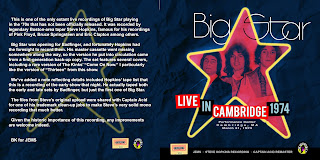 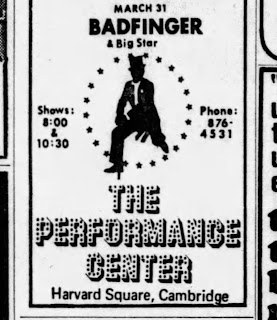 Peter Wassyng has spent a life surrounded by music. In addition to his work below, he had a long career as a record promo man for Capitol Records, EMI-America and A&M Records, among others.

My lifelong journey in the music industry began in earnest when I helped Roger Abramson manage The Performance Center, a small two-room club on the third floor of The Garage in Harvard Square at 36 Boylston Street (now JFK Street). Although the club only lasted nine months (December 1973 through August 1974) it was way ahead of its time and only failed due to infighting between the investors and landlord. Abramson was a transplant from Cleveland (where he managed Joe Walsh for a time), and managed to bring some incredible acts to The Performance Center during its brief run. Bonnie Raitt opened the first shows in December ’73 — introduced by a recent Emerson graduate and local comedian named Jay Leno!  The venue was off and running.

The Performance Center consisted of two rooms, one with a 500-person capacity and one with 350, and both rooms had state of the art staging, dressing rooms and sound at the time… although I do remember one night in May 1974 when Aerosmith blew the Bose system filling in for the New York Dolls after Dolls’ bassist Arthur Kane twisted his ankle wearing high heel boots! Bose showed up the next day and replaced all the speakers.

My job was booking the local talent, stage manager and emcee for both rooms. It was a blast running back and forth between rooms getting the bands on stage. I could not believe I was getting paid for this, and the music was amazing: great, wide-ranging acts like Rudy Vallee (who was in his 70s at the time), Captain Beefheart, a pre-fame Patti Smith, Todd Rundgren and Utopia, The Modern Jazz Quartet, Tower of Power, Waylon Jennings, Howlin’ Wolf and so many more….plus all the local acts…Richard and The Rabbits (who eventually changed their name to The Cars), James Montgomery, Bob McCarthy, Chris Rhodes, John Lincoln Wright, etc., etc. I made a lot of great friends, and a lot of great memories.

One of my favorite memories, though, was the week-long engagement of The Johnny Otis Show. Otis traveled with an entourage of at least 14 musicians, including his 20-year-old son Shuggie, saxophonist Eddie “Cleanhead” Vinson and his back up singers Three Tons Of Joy (Marie Adams and sisters Sadie and Francine McKinley) amongst them. Now, club policy was to give each band member 2-3 free drink tickets per night; I usually handed them to the manager or road manager. However, the second night of Johnny’s show, I was taking Three Tons Of Joy up the elevator and they “volunteered” to pass out the tickets to the rest of the band. Busy as I was, against my better judgment I handed them 54 tickets and considered my duty done. The next day Johnny Otis comes into our office and begs me and Roger to “never let that happen again…” Apparently the ladies kept almost all the tickets, got roaring drunk and started fighting with all the band members over the tickets, and then the band almost got kicked out of their hotel! We laughed so hard after Johnny left….

It’s a shame The Performance Center’s run was so short lived. Roger’s vision was to make it the best club for the performers and audience, and for those 9 months, we worked incredibly hard to make sure it was!  https://www.mmone.org/the-short-beautiful-life-of-the-performance-center/