35 Year Flashback: Part 2 of 4: Springfield and Providence September 1980 where Willis Gets "Confused" and Misses His First Days of College


So, wise Junior Kirk and Senior Dave decided to take Freshman Willis on a little Grateful Dead Field Trip on day two of school.  We told Willis to skip his first few days of classes and come with us; he could tell his professors he "got confused" and couldn't find the classroom and that's why he missed his first classes.

Seeing the Dead and skipping college was in its fourth straight year at Bowdoin, as: 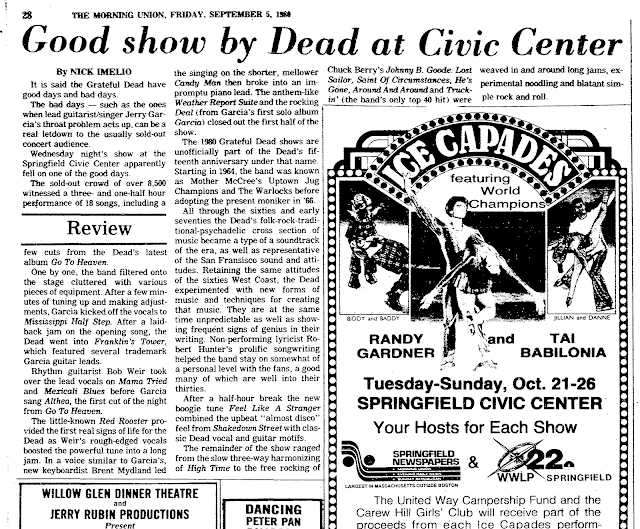 Sure enough, we headed off for these two shows.

As you saw in my last post, August 1980  was a filet mignon period for the band.  Also see Archive Dead Forum.  These two shows were the subject of Grateful Dead download series 7 with the Springfield show and the Providence second set filling the 3 CDs whole of downloads.  This was the 2nd of 4 Springfield shows I saw from 1977-1980 that were released, the other being May 11, 1978, the so called "mescaline show".  Funny, I thought 4-23-77 and 1-15-79 were even better shows.  It was a special place.

It's funny because the shows are not as strong, I feel, as the prior shows in August and 9-2, and certainly not as strong as Lewiston which follows in the next post.

Still a fun road trip, and a very groovy and rare for 1980, Supplication>Estimated Prophet.
The True Bucky on archive says it all  This 9-4-80 version is in the background.

Chris really nails it in his comment below. The band was a bit hung over, but who could blame them?They'd just come off the best, greatest release; the hugest climax they'd had in many a year.It had started Friday in Philly, with the highlight being a great 2nd set featuring the scorching Let it Grow > He's Gone > TOO. Saturday never touched that but was better from start to finish: hot, hot, hot. Sunday was the best show I'd ever seen ~ until Tuesday's classic Rochester's Aiko > Dew > Mag made all other shows pale in comparison.So, Springfield was left with the crumbs that fell of the table. But some pretty decent crumbs they were. Halfstep > Franklin's to open & Let it Grow to close the set this week, so how bad can it be? (although this Deal has the distinction of being the very last before the second instrumental was added during the acoustic shows).The second set has few highlights, but Stranger was one. it's listed at 11 minutes. 11 minutes would be one of the longest ever played. High Time was nice ~ I couldn't help think how it would've done nicely switched with Ship of Fools the previous night.After that, things just collapse as the band mails it in on fumes. The dreaded appearance on another Lost > St. takes place, and I recall oddly that the 'next song' was truncated during the jam as Jerry hurried to the drums...Well, after the drums/space, we found out the missing song from after Saint of Circumstance: He's Gone, one of the few times ever in this slot ~ and no big deal, believe me.After that, we got the Deadhead's worst nightmare circa '80-81: Truckin > Peter > Around & Around...Johnny B Goode I guess after that. The true highlight of the night was watching a cop gather his fellow policemen to watch a tripping kid walk in a circle about 2 feet in diameter... for the entire second set, looking at his feet...as the cops laugh hysterically.Amazingly, the band was back on top of things next show in Providence and finished off the tour with the legendary concert in Lewiston, Maine 2 days after that on 9/6/80. 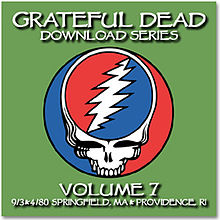