When I was a teenager, California was a Prophet on the Burning Shore.  I was up in New England.  But that would all soon change.
Step one, get a Marin County girlfriend
Step two, remember that my Mom's brother lived in Novato
Step three, go to California for the first time in June 1979 for ten weeks
Step four, see a bunch of club shows with Jerry and Merl
Step five, see three Grateful Dead shows in California

So, I was working in the Lonely Financial Zone, by the sea at Deans and Homer and was able to take a late afternoon bus up to Sacramento on Thursday June 28 after reading about the show in the Pink Section a week or two before.   Had to go. 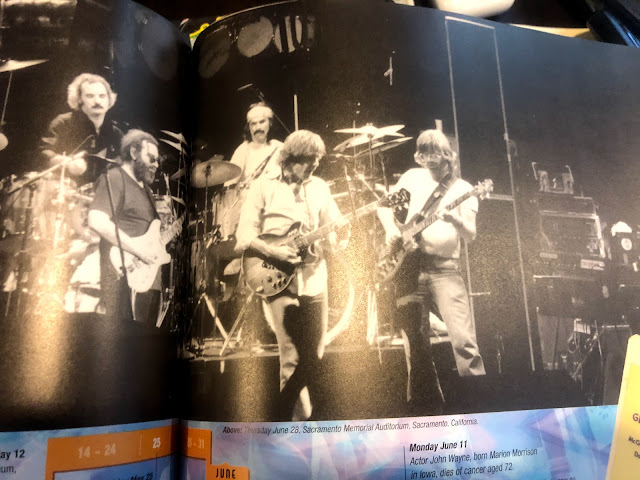 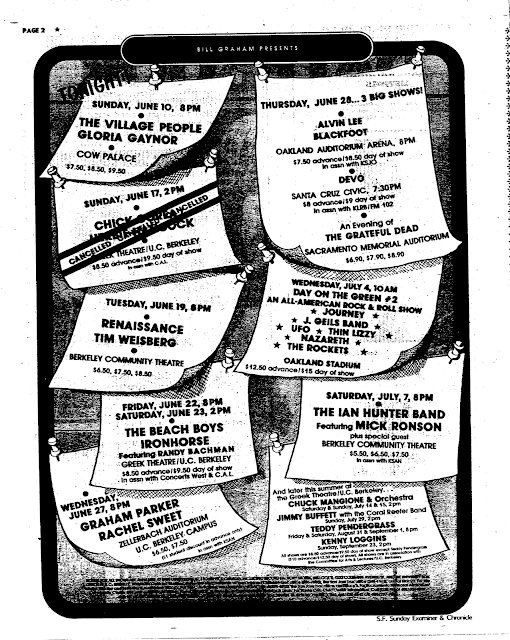 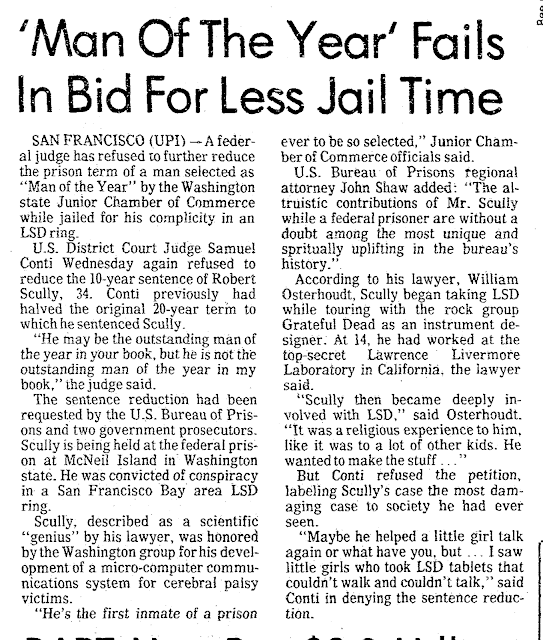 I remember easily getting a ticket at the box office, and that the building really wasn't too full. It was so low key compared to places like Hartford, Binghamton, and Boston.

This was a fun show, albeit a little rusty compared to my earlier East Coast experiences. Nice little Don't Ease opens, Peggy-O and Its All Over Now shine and The Music Never Stopped closed set one.
The highlight of the show is the Scarlet>Fire and Playin in the Band>Eyes predrums.
I did have to hitch home to Marin after the show and go to work the next day in the City.
Enjoy!

Don't Ease Me In, Minglewood Blues, They Love Each Other, Mama Tried-> Mexicali Blues, Peggy-O, It's All Over Now, Stagger Lee, Passenger, Loser, The Music Never Stopped Scarlet Begonias-> Fire On The Mountain, Samson & Delilah, Ship of Fools, Playin' In The Band-> Eyes Of The World-> Drums-> Not Fade Away-> Black Peter-> Around & Around, E: U.S. Blues

Here's the music from this show, only set two is available on SBD 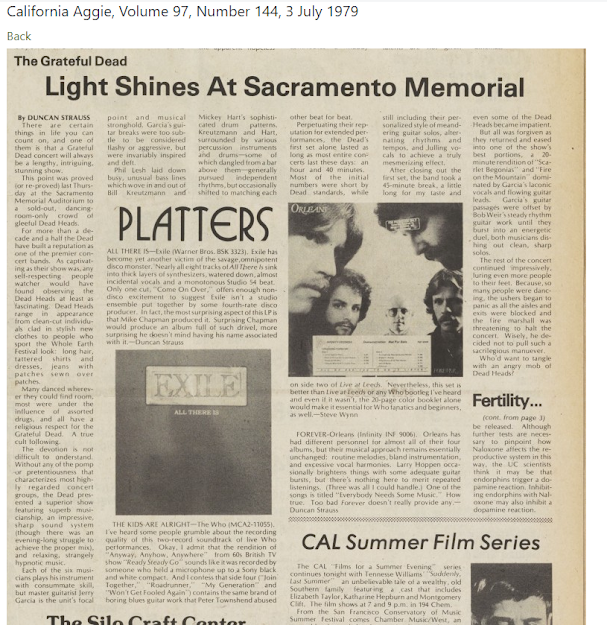 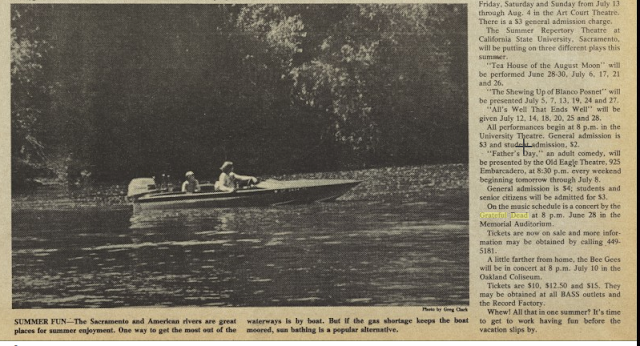 There are certain things in life you can count on, and one of them is that a Grateful Dead concert will always be a lengthy, intriguing, stunning show. This point was proved (or re-proved) last Thursday at the Sacramento Memorial Auditorium to a sold-out, dancing-room-only crowd of gleeful Dead Heads. For more than a decade and a half the Dead have built a reputation as one of the premier concert bands. As captivating as their show was, any self-respecting people watcher would have found observing the Dead Heads at least as fascinating. Dead Heads range in appearance from clean-cut individuals clad in stylish new clothes to people who sport the Whole Earth Festival look: long hair, tattered shirts and dresses, jeans with patches sewn over patches. Many danced wherever they could find room, most were under the influence of assorted drugs, and all have a religious respect for the Grateful Dead. A true cult following. The devotion is not difficult to Understand. Without any of the pomp or pretentiousness that characterizes most highly regarded concert groups, the Dead presented a superior show featuring superb musicianship, an impressive, sharp sound system (though there was an evening-long struggle to achieve the proper mix), and relaxing, strangely hypnotic music. Each of the six musicians plays his instrument with consummate skill, but master guitarist Jerry Garcia is the unit’s focal

point and musical stronghold. Garcia’s guitar breaks were too subtle to be considered flashy or aggressive, but were invariably inspired and deft. Phil Lesh laid down busy, unusual bass lines which wove in and out of Bill Kreutzmann and"

Mickey Hart’s sophisticated drum patterns. Kreutzmann and Hart, surrounded by various percussion instruments and drums —some of which dangled from a bar above them —generally pursued independent rhythms, but occasionally shifted to matching each

other beat for beat. Perpetuating their reputation for extended performances, the Dead’s first set alone lasted as long as most entire concerts last these days: an hour and 40 minutes. Most of the initial numbers were short by Dead standards, while

still including their personalized style of meandering guitar solos, alternating rhythms and tempos, and lulling vocals to achieve a truly mesmerizing effect. After closing out the first set, the band took a 45-minute break, a little long for my taste and

even some of the Dead Heads became impatient. But all was forgiven as they returned and eased Into one of the show’s best portions, a 20minute rendition of “Scarlet Begonias” and “Fire on the Mountain’’ dominated by Garcia’s laconic vocals and flowing guitar leads. Garcia's guitar passages were offset by BobWeir’ssteady rhythm guitar work until they burst into an energetic duel, both musicians dishing out clean, sharp solos. The rest of the concert continued impressively, luring even more people to their feet. Because, so many, people were dancing, the ushers began to panic as all the aisles and exits were blocked and the fire marshall was threatening to halt the concert. Wisely, he decided not to pull such a sacrilegious manuever. Who’d want to tangle with an angry mob of Dead Heads? 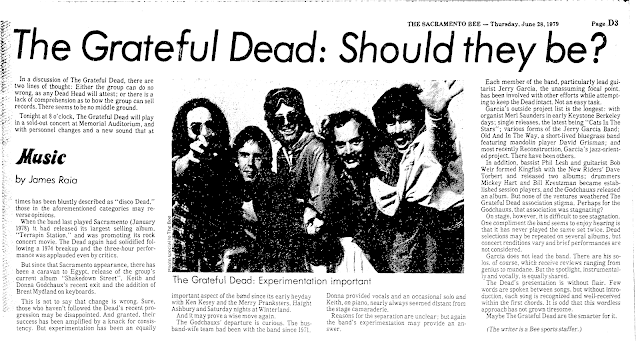 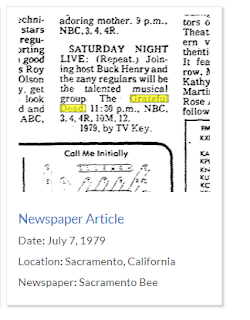 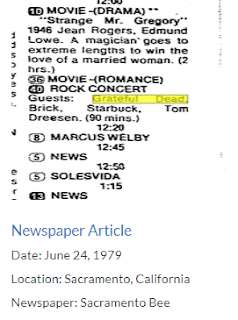 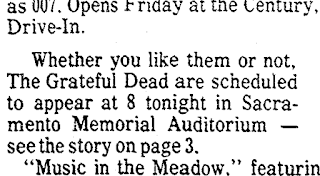