Sorry guys, I have been under the weather so I missed the Exact 35th anniversary of my longest and maybe favorite top-2 or 3 show, December 31, 1981.

Yes, I know I was there ( as well as Fiesta Hall stealth show earlier in the month), and Joan did not mess with most of her Dead set, except during Baby Blue and she may have added to my only Bobby McGee and Bye Bye Love, but I always had the Greek Baby Blue in September, maybe the best one, so just swap that one out with the this one. Mountain Girl married Jerry at this show and she didn't get to sing. Gee.

And for your lucky reading, looks like I just found an Official published review of this show which is attached as a picture and a full PDF.  It's actually a review of all Bill Graham shows that night as well as a nice rendering of the always friendly bill.  Because of Bill, you can have all this  (which includes the full Stanford Daily issue of January 8, 1982

And don't forget, there were FOUR sets, and a video exists and we had breakfast served at 4AM after the Dark Star>ST Stephen>The 11>baby Blue   (replace the middle tunes with Bertha>Good Lovin).

This is really a remarkable show , set 3 alone may be the best I ever heard the band play during any New Year's from 1980-1985. Kesey. Ballons. Iko, Playin Sandwich of Terrapin, The Other Ibe, NFA, GDTRFB, Dew. Close to perfect. Strike that. Perfect.

An acoustic set with Joan Baez preceded the Dead only sets, set list was: Me & Bobby McGee ; Bye Bye Love ; Lucifer's Eyes ; Children of the 80's; Banks of the Ohio.  so.rry deadlists, there were four other songs prior. ANd watch the Matt Kelly stuff, he rocks, I think he comes out during Good Lovin too. 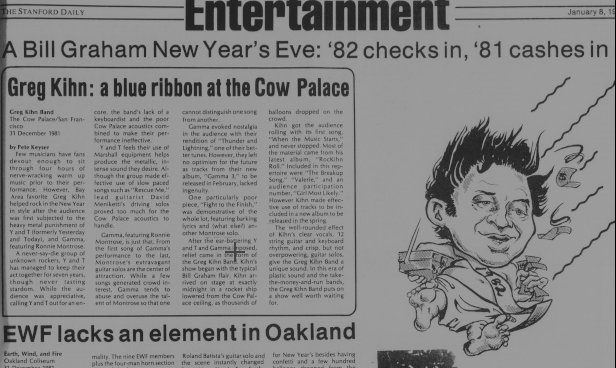