The five Fare Thee Well shows brought in more ticket revenue than any full year in Grateful Dead history based on my analysis of the approximate economic performance of the band.

Per my research of shows (from Deadbase), ticket sales and concert attendance, the Grateful Dead sold about 22 million tickets and generated about $393 million in ticket revenues over 2,325 performances during their entire career. 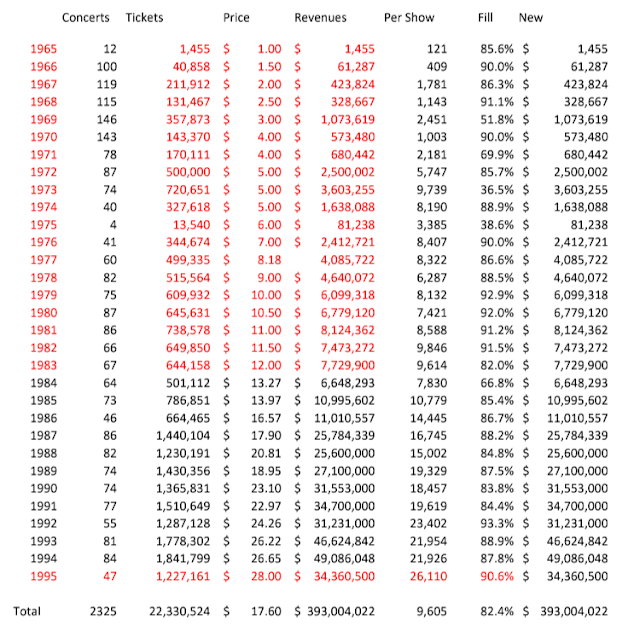 The crazy part is that with the I Will Survive surge of the band post Jerry's 1986 coma, more than $300 million of their ticket revenues came in the last ten years of the band from 1986 to 1995. During those ten years, the band averaged nearly 20,000 in ticket goers per show over 700 shows for almost 14 million in fans buying tickets at an average price of about $23

This was a far cry from the approximate 5 million who bought tickets in the ten years from 1976-1985 after the 1975 "gone fishing" vacation period.  Ticket price inflation sky rocketed after the mid 1970s.  Note the increase in ticket sales in 1969 due to the big summer shows like Woodstock.

I welcome any comments or corrections. I was lucky to have seen accurate information from the last ten years, and I estimated prior to that using techniques I felt appropriate.  The song that playing is Money, Money (only one of 3) from May 21, 1974 at the Dub, University of Washington.

Thanks for putting this togther!

fascinating! thanks for working all this out and publishing it

They deserve whatever incomes they can get. Good for them and good for us Deadheads. They have given us so much over the years .So much good music , so many good times.

Thanks for the comments. It's interesting that with ticket price increases and larger venues, the 1990s Dead would gross more in ticket revenue per show than they did in entire 20 show tours in the mid-1975s. At the same time, the ticket revenue from the three Chicago FareThee Well shows were higher that the total ticket revenue the band shows generated during the 1960s and the 1970s combined.

Note that the band never received all the ticket revenues. When I tried to get the Jerry Band to come to my college in Maine in 1978, I was told the quote for a show was $6,000 for the band and $25,000 for the Grateful Dead. Thus perhaps the band would get something like 50% of the gate. I welcome people with more expertise to comment on these issues

What show was that?

I have just linked to this.

Let me just make some points/ask some questions in order.

1. Love the music - request that you show us the version information in the post (sorry if you did and I missed it!).

2. I love the columns you have selected for display. Key data. Very much like industry standard, like what I presented in my analysis of the GD as top-grossing act of 1991.

3. BIG: I'd love to hear more about your data and methodology. Where did you get your information. In terms of method, I think I have a sense of it - you used the data you had and you created year averages. I probably have *a lot* more data on this, if you're interested. In any case, I'd also love to talk data with you.

3a. My narrowest request would be that you add another column and tell us, for every year, how many shows form the basis for your estimate. If it's like one, I'd like to know that.

4. What kinds of dollars are these? Real dollars, nominal dollars, constant 1990 dollars, or something else?

I don't expect you to really address all of these, by the way. There are just the questions in my head. Mostly I am grateful to you for doing this work and sharing it!

Those sure were some GREEDY peace and love hippies. Just imagine how you Grateful SuckSuck would be all up in arms if a corporate CEO made anywhere near as much money as one guy in that band who does nothing but play crappy music makes.

You people should clean the wax out of your ears. The Grateful Dead are horrible, or should I say were horrible.

I seen The Grateful Dead 2535 times loved every show