So once upon a time, Juliet had never seen the Grateful Dead. Then the band debuted at Giant's Stadium and the rest is history.  (Juliet's Blog)

If they would have played Space>If I had the World to Give>Sugar Magnolia it would have been perfect, but either curfew or\ something made this show extra short after drums.

Immediately after the show, the Dead announced on the stadium electronic billboard the three shows in Giza.  Too bad, we had school and no money to go.

After seeing eight monster shows in 1977 at age 18, I have to admit 1978 was a bit of a let-down at the time.  The shows were more predictable and formulaic. Perhaps Jerry was starting to take more medicine too.  However, as an old dude now, I have come to really respect 1978 shows for their sheer power (see Dew 4-21-78. Repeat).  So I am really looking fforward for the July 1978 box-set with the three new Betty Board SBDs   I also loved the January West Coast shows (Stockton! Eugene!), the short February and April Midwest shows, the Mescaline Show in May and this show in East Rutherford, New Jersey.

If I had to pick grateful seconds here, I would have to pick the nearly 6,000 seconds of:
Scarlet>Fire and Estimated>Eyes.  I checked DeadBase 11 and found there were only six shows in the 1970's where the Grateful Dead performed Scarlet>Fire and immediately followed it with Estimated>Eyes.  And here lies the main error in my thinking. It wasn't that the Dead were playing this four song sequence every night, it is just that I saw three of the first five times the band did it. So it was my own predicable sequence. It's so funny.

I might have thought the Dead were "less repeative" in 1980 and 1981 because I missed all eight. :)
I think you will all love Dick's comments on the show below calling Scarlet Fire "one of the best versions I have heard." And we know Dick heard them all.

I asked some of my friends to remember the show.


Ed (yes that Ed) from Andover

I was there with Sasha, Jenny, Tim and Tom F from PA and Tom C and Tom K who were two lunatics from my hometown. The night before the show, my homies and I took a bus out to the Meadowlands and spent the entire night tripping, tramping through a swamp and annoying fellow heads by ranting about alligators. At one point we pissed off some bikers and had to make ourselves scarce. The next day the PA crew came out and miraculously met us. We were exhausted with no choice but to trip again. During the show we sat in front of some guys who kept doing this kind of warble/chant that went "oyoyoyoyoyoyoyoyoyoyoyoyoooooooooow!!!" We thought that they were hilarious and the funny thing is that I have heard them in the background on a couple of audience tapes from other shows. I recall that Waylon and Willie were there and maybe Marshall Tucker. I also recall getting on the floor and seeing/watching a Scarlet/Fire/Eyes or something like that. Check the tape. i was never a set lister. I had an amazing time at that show. Very psychedelic and fun and the band was great. At the end of the show I salvaged a Kodak instamatic from a garbage heap on the floor and got the film developed. The show shots were not very good and I have no idea where they are now but the funny thing was the first several shots were of guys mooning the camera in some working class suburb probably in northern New Jersey. Nice.

Juliet
I was such a newbie!!
No pictures required
You were like 14

Ed
I see that NRPS was there. I knew there was a third act.
Both new riders and dead played new mingle wood blues

Arnie
I think I was in my first week of college back then, going to rush week, playing beer pong at TD, and wondering who this wacky roommate was who kept disappearing to drive to Dead concerts all over the northeast.  Missed a few good shows by not jumping in, but made some good friends too.  Can't say the beer pong was super-productive.
Yes Arnie. I met you 9-4-77 the day after English town   dead. Jimmy and I showed up a day late I think

Liz
I wasn't there, was up at Bowdoin for my exchange year, so I think I had to be there early like the freshmen? Or maybe most people got there early because of rush week. Either way, everyone at Bowdoin who found out I liked the Dead told me I had to meet Dave

You weren't there yet because you were in NJ, apparently at this concert. But turned out we'd both been at Englishtown the year before.

I think Dick had better handwriting than me. But I am impressed when I look at my real-time set list how consistent my writing is (I so wish I can find my notes from Springfield 77 or some other mind-melting show  for comparison).  The only thing I am mad about the boys that day, is that darn 4:35 to 5:15 break that left no time after drums to play longer due to what I believe is a 7:00pm curfew. I am surprised looking back how consistent my writing is.  My first call for the name of I Need A Miracle is "Walk Away". I remember first calling Estimated "California" on my 4-23-77 setlist notes. 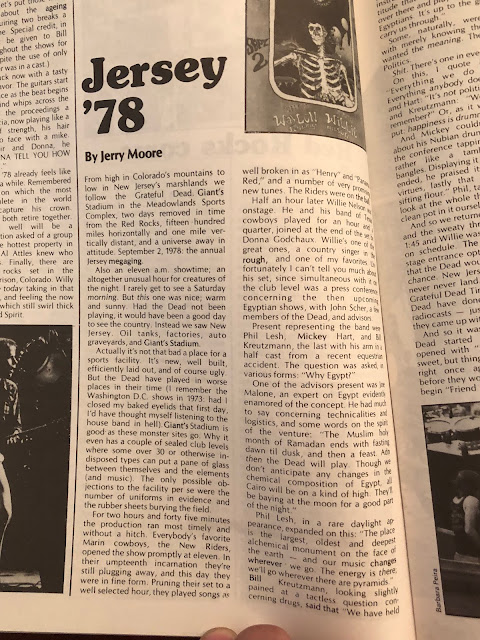 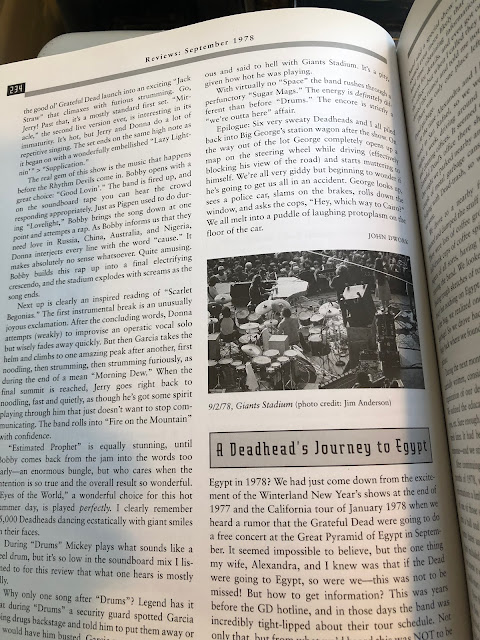 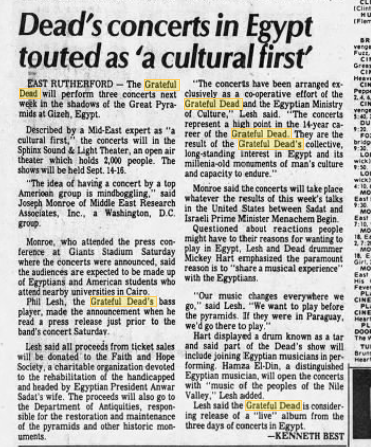 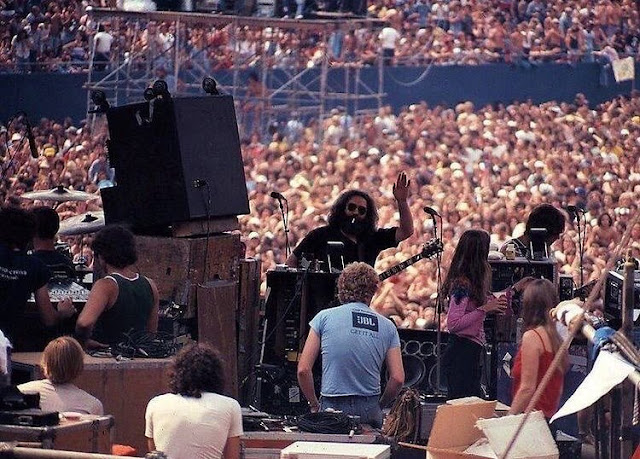 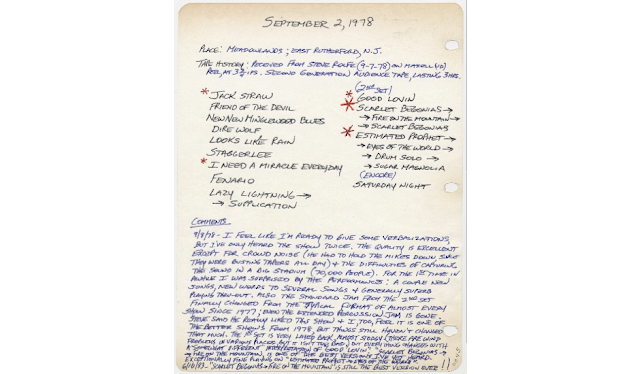 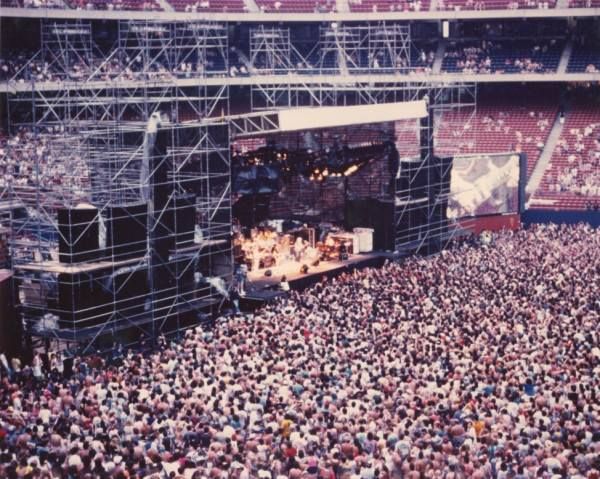 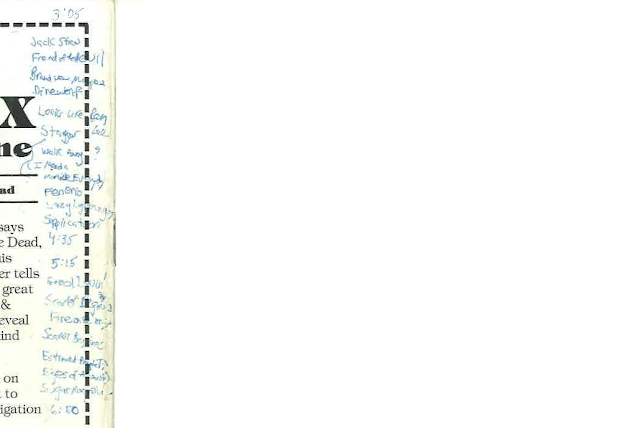 There were two New Minglewood Blues played that day, as the NRPS played it earlier in the day.  This was the first (only) time I ever saw Willie Nelson too. 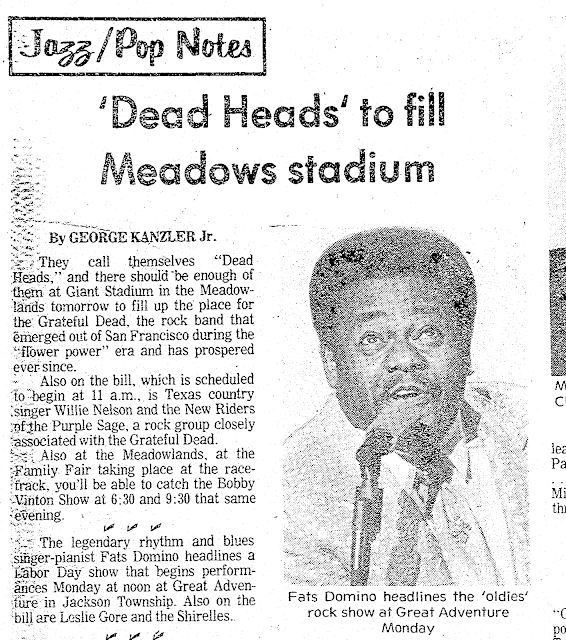 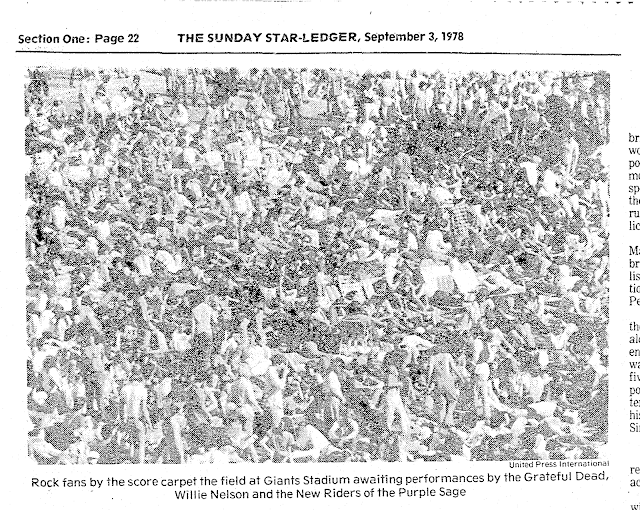 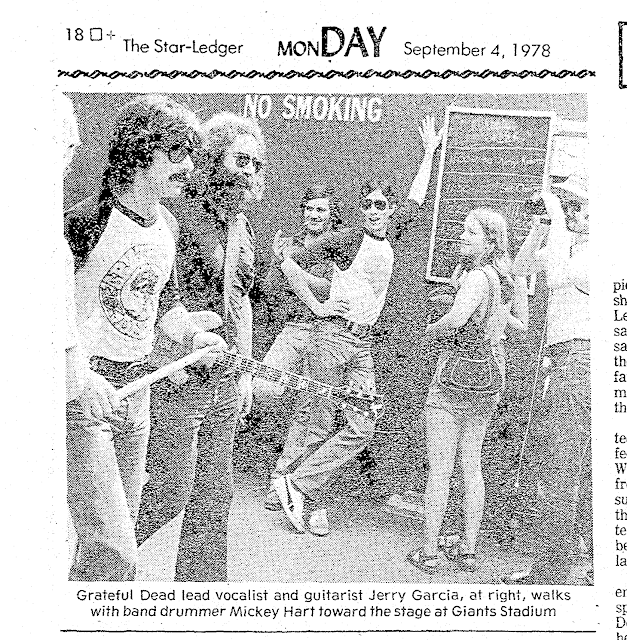 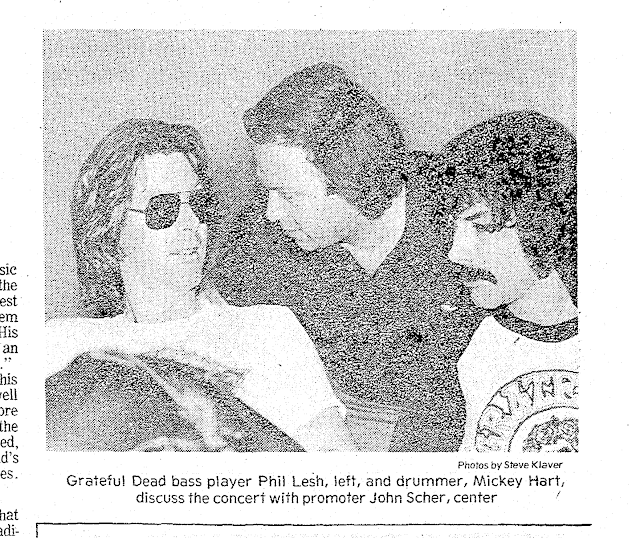 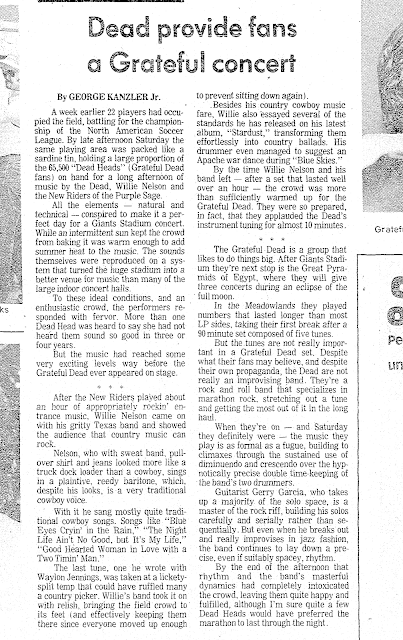 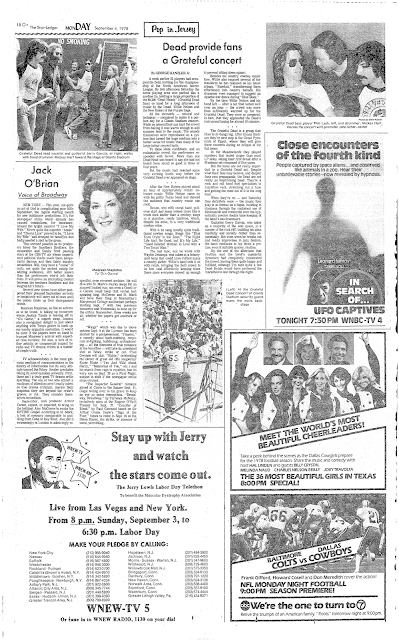 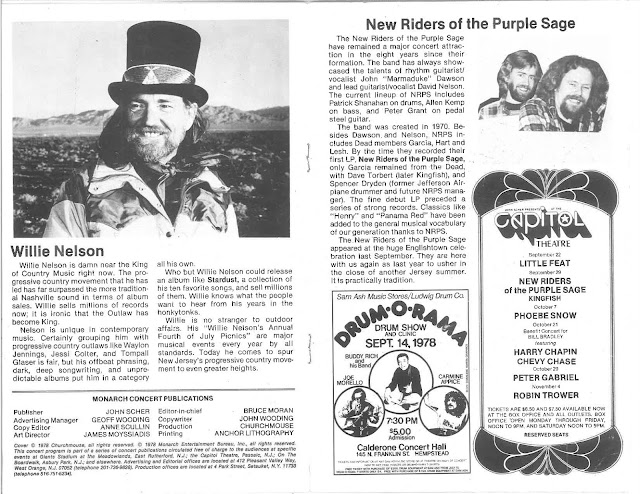 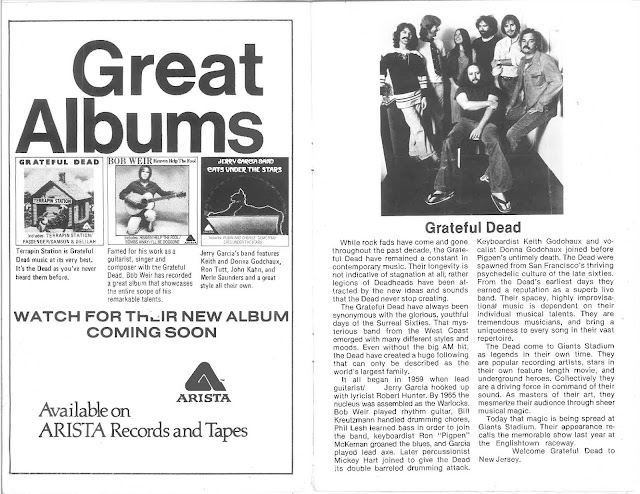 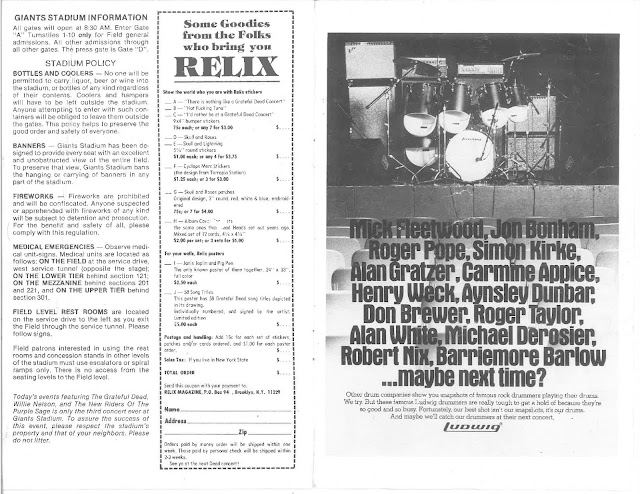