But, if you were a lucky guy, you might see one of those specials times, that Franklin's Tower would appear in an unusual spot, like opening the show, the encore (me, me, me) or out of the closing jam of Stella Blue.  This is the story of those rare and unusual appearances of Franklin's out in the desert.
Here's some for you or here. 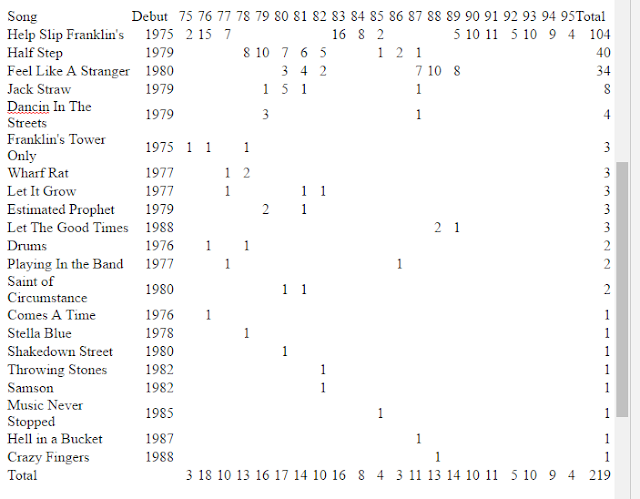 The only standalone Middle Set Franklin's Tower  SF September 28,1975
In only the 3rd version there was Just a broken string and a two song delay between Help/Slip and Franklin's

June 9, 1976 Boston Encore Franklin's Tower  1976 I was there. Only encore. Were you guys just too tired to play the whole suite guys after the St Stephen??  Weird that this, the 6th version, was the only time they played as an encore.  It felt right but I would have loved the entire thing. Kind of like Terrapin at Englishtown.  Tease.

January 30, 1978 Chicago Stella Blue>Franklin's Tower
Estimated > Eyes Of The World > Space> Stella Blue > Franklin's Tower > Around And Around
During the totally underrated January month of 1978, the Dead pull this out of their hat during a nice Stella jam which I heard on Sirius the other night. Which gave me the idea to do this piece.

May 9, 1978   Syracuse  The only Show Opener Franklin's Towers. Cool.  I didn't even know about this one until the last few years


In Alligator Alley, the boys combine Shakedown and Franklin's for the only time ever to lead off the second set.

July 18, 1982 Ventura Samson & Delilah>Franklin's Tower
On the beach with the boys, the once only pairing opens set two.

June 20, 1987 Greek Hell In A Bucket>Franklin's Tower
Back in Berkeley, this time at the great is another once-only couplet, this time to open the show.