Here's a groovy little tale from nine years and a day before Englishtown September 2, 1968 from Betty's Organic Farm. Enjoy 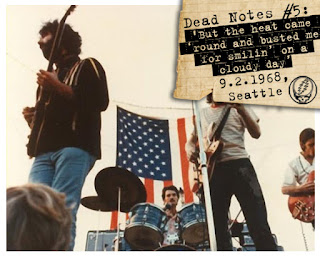 Mud man
"The best freaking scene ever," said one musician. The Sky River Rock Festival and Lighter Than Air Show was not dampened by the rain that fell over Labor Day weekend, but made creative use of it. And the proceeds went to an assortment of American Indian and Black organizations.
The Friends of American Indian Rights, the principal Indian beneficiary, the Central Area Committee for Peace and Improvement, and the Black Student Unions of the Pacific Northwest were the principal organizations for which the musicians gave their benefit performances. Some of the proceeds are also going to local institutions for alienated youth, such as the Open Door Clinic and the Seattle Free University.
The music started at 9:30 on Saturday morning and ran till after midnight. Sunday's show ran from nine in the morning till five on Monday and Monday's show was of necessity a little disorganized, but after giving everybody four hours to sleep, the festival wound up with one more eighteen-hour slug of music.
Some forty acts, rock, blues and folk, with a few theater acts such as the Congress of Wonders and the S. F. Mime Troupe, were on stage for the marathon event before an audience of around 15,000. Spectators had trooped in from all over to Betty Nelson's Organic Raspberry Farm in Sultan, Washington (pop. 960), fifty miles outside of Seattle, not to be disappointed.
On Saturday it started to rain. All the less reason to forbid the audience to set up their tents in the field of the natural amphitheater. Soon there was a vast modern-day replica of a Civil War encampment, and the clouds of smoke were immense. The police kept their distance, like decent, law-abiding, privacy-respecting public servants, and everybody was happy.
While the audience was gathered like a great camp meeting in the field, the musicans -- all 175 of them -- were quartered in the three floors of the Camlin Hotel. Musicians, it is well known, are musicians because they like to play music, and the concentration of musical trips was incredible.
And who was there? Santana, Dino Valenti, It's a Beautiful Day, James Cotton, the New Lost City Ramblers, Kaleidoscope, the Youngbloods, Country Joe and the Fish, Phoenix, John Fahey, Mark Spoelstra, H. P. Lovecraft, Big Mama Mae Thornton. The Grateful Dead played a magnificent set for their last appearance with the personnel of their recordings.
By Monday the field was soggy with rain, but spirits were high. A Mud Cult arose in the principal puddle, improvising Mud Rituals and Mud Dances. The baptism consisted of taking long run and belly-flopping (with your clothes on) in the mud, alter which you would be covered with mud and embraced by other cultists.
The Mud People also made half a dozen Charges of the Mud Brigade through the Civil War Encampment. Their Mud Chant went something like, "mud (stomp) mud (stomp) we like mud." Mud was, like they say in ads, Happening, so a couple of dozen fans were swinging with it.
Continuity and saccharine rap between acts were provided by Buddha (not the B., you understand, but a San Francisco underground bartender and former KMPX strikebreaker who goes by the name). His longwindedness was one factor in the concerts' running overtime. Musicians got into the habit of telling each other when they were due on stage in terms such as, "We're on at 4:30-plus-Buddha-rap." "The only crummy ointment on the fly," said one.
The kind of festival it was, when a young man wearing nothing but beads got up on stage during Big Mama's set and started dancing in the lightshow, it was not thought strange. Except perhaps by Big Mama, who had registered dismay when she first saw the Encampment that was to be her audience.
As Big Mama turned to leave the stage, the young man found himself facing the microphone, and impulsively said, "Hey, you know what? I just had a real flash. We're all Jesus Christ," and everybody applauded. Then Big Mama came back to the mike and said, "Wow! Wasn't that weird! I'd heard about it, but I never thought I'd see it!"
There was also a great scheduled balloon ascent, and the balloon was lots of fun, everybody played with it the first day. Then on the second day, the balloon went ahead and ascended, but paying no heed to human schedules. And there was a pig, some sort of personage in the festival. He was already a Mud Cultist from in front.
Many a festival would have been ruined by rain, but not a perfect festival, a festival with lots of festival in it. That's what Sky River was, and Lighter Than Air, too. Many thanks to John Chambless, director, and his assistant Stan Maginnis. And especially to Betty Nelson and her organic berries.
(RS 19, October 12, 1968) 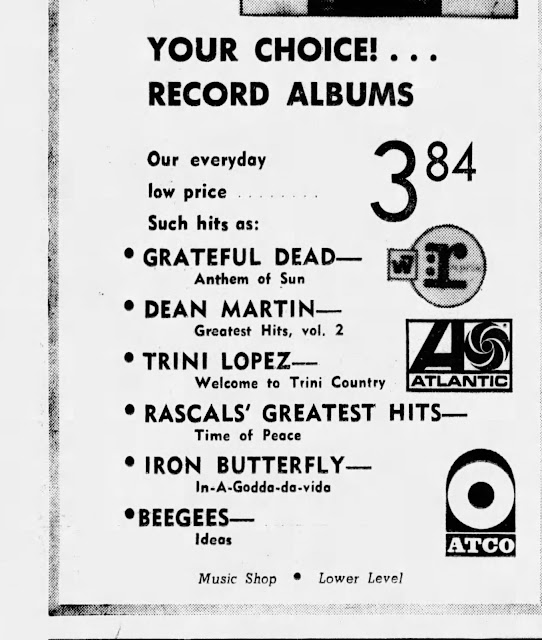 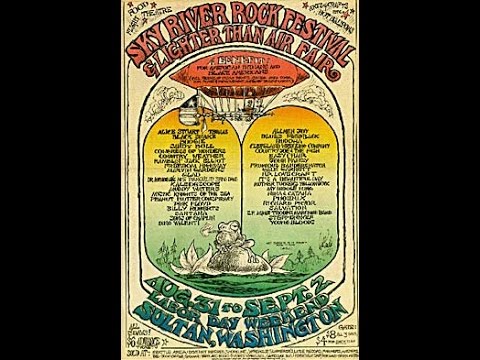 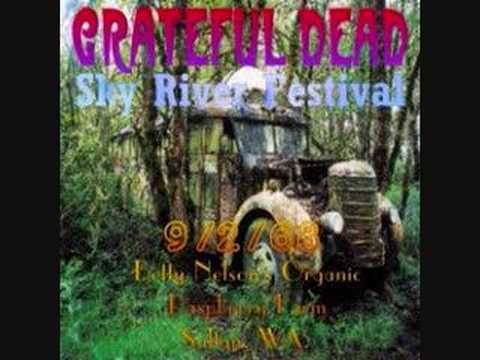 An estimated 140,000 attended the first and probably the last Newport Pop Festival in California's Orange County Aug. 3-4, viewing, among others, Tiny Tim, Jefferson Airplane, Country Joe and the Fish, Grateful Dead, Chambers Brothers, Charles Lloyd, James Cotton Blues Band, Quicksilver Messenger Service, and the Byrds.
The festival was regarded musically successful but on other fronts rather less than pleasing. The performers appeared on a raised stage under a striped canopy, but the young crowds were left sitting or standing in a huge, flat, dusty-dry open field under a broiling sun. Refreshment and rest room facilities were less than adequate and the sound system was not powerful enough to carry the sound to eveyone present.
The highlight of the pop fest on the first day (Saturday) seemed to come when Country Joe closed the bill. The hour was late and Orange County officials were threatening to shut off the electricity when the band went on, finally relenting to give the band time for two songs. As they began their first, "1, 2, 3, 4, What Are We Fighting For," the approximately 40,000 young people still on hand rose as if one, cheering, hands held aloft in the "peace sign." During the second number, a long blues, even the cops on stage were grinning and adlibbing a moderate version of the boogaloo.
The second day's climax came when David Crosby started a planned pie fight with the Jefferson Airplane. In all, 250 cream pies flew back and forth . . . and the thousands of people present stormed the stage to join in.
The musical line-up was an impressive one. Besides those already mentioned, bands appearing were Alice Cooper, Steppenwolf, Sonny and Cher, Canned Heat, Electric Flag, Butterfield Blues Band, Eric Burdon and the Animals, Blue Cheer, Iron Butterfly, Illinois Speed Press and Things To Come.
But admission to the festival was $5.50 per day -- to sit in heat and dust. Most considered it another in the series of pop music shucks.
The Newport Pop Festival -- which wasn't even held in Newport, but in Costa Mesa -- was produced by Humble Harvey Miller, one of L.A.'s Top-40 deejays, and Wesco Associates, basically the same coalition that staged a similarly uncomfortable weekend festival last summer in another Los Angeles dust bin.
(RS 16, September 14, 1968)