The last one is up here.


You know you love these.
The shows where the Grateful Dead closed set one with a monster Playin' in the Band.
But, the band only did this 75 times, almost entirely in the one drummer 1972-1974 era.

After this, they continued this lovely set closer into 1976 and 1977, but stopped on April 22, 1977 in Philadelphia. This was exactly one day before I started my eight show 1977 attendance.
Fuck my luck. I'm still waiting for my set-one closing Playin' in the Band.

Only half of the last eight were standalone. Groovy 76-77 Dead had to add enhancements

According to Deadbase 50, there were 600 shows where Playin In the Band was played
This includes 582 plus 18 Playin' reprises which makes it the song most played at Grateful Dead concerts.  Sugar Magnolia at 594 and The Other One at 583 follow closely for those keeping score.
Interestingly,  Jerry songs do not top the list since he had more songs than Bobby.

However the 1975 vacation, the Dead only played Playin in the first set 13 more times.  In my 80 shows, I never saw this occur. I Never Saw Such a Beast as the First Set Playin' in the Band

The last five after 1977, five opened the show

There is also this weir night 3-28-1989 in Hot "lanta
with Samson And Delilah; Ship Of Fools; Playing In The Band > Foolish Heart > Drums > Space > Gimme Some Lovin' > Wharf Rat > Throwing Stones > Not Fade Away

The last complete Playing in the Band all wrapped up into one, but that one is set two and a story for another day 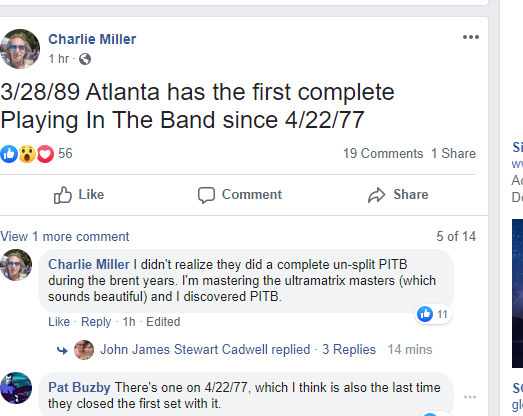 # of First Set Playin by Year