One of the last great Morning Dews got a nice makeover over the weekend with the Charlie Miller upgraded release of the Grateful Dead's June 26, 1994 show from Sam Boyd's stadium in Las Vegas.

Now I have been to a football game in Sam Boyd in December when it is relativity cool, maybe 85 degrees, but I hear that this show topped 120 degrees on the field making this perhaps the hottest show the Dead ever played. 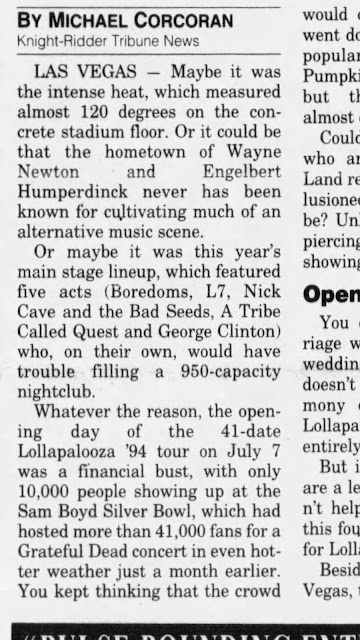 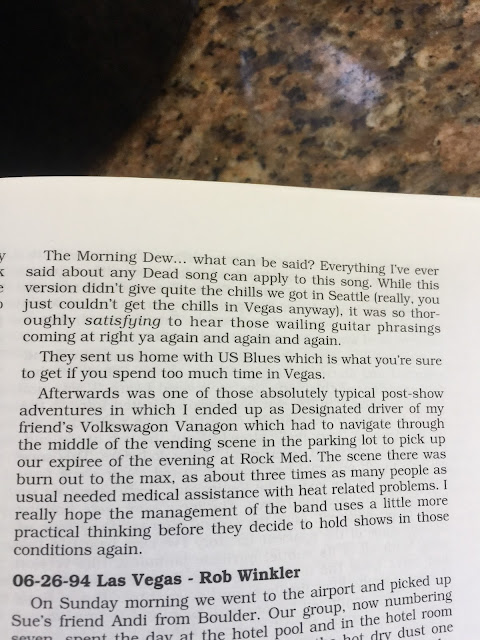 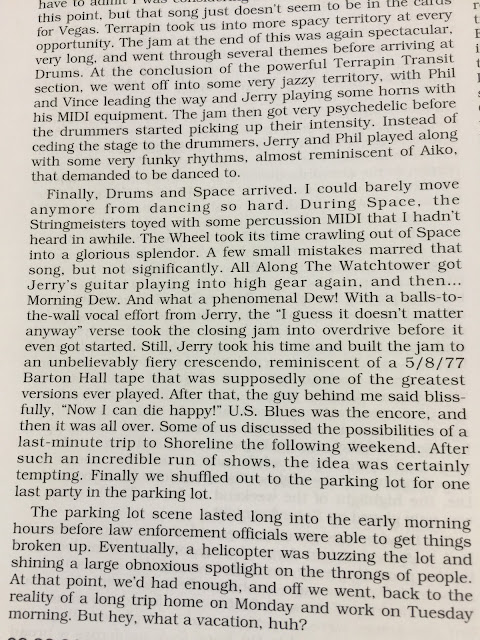 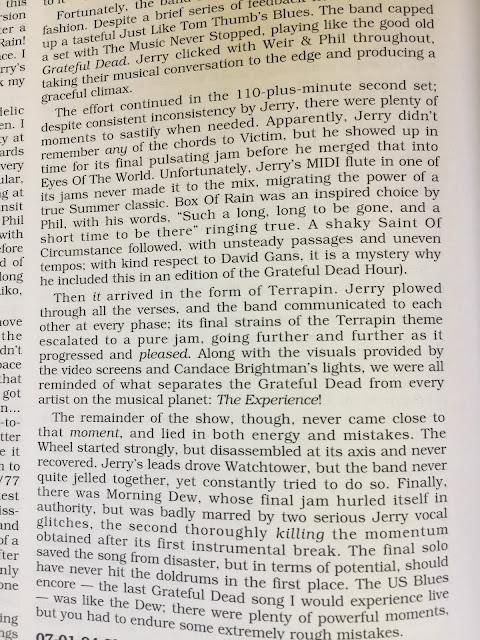 Reviewer: easywind2 - favoritefavoritefavoritefavoritefavorite - November 25, 2016
Subject: Split reviews
I have read all the reviews here on this show and I have to add my 2 cents and review. 2 cents is there is always going to be some negative reviews on any show, but most, Underlined, most people who were there, I believe have to say, Wow! This was a magical show for me even though I spent Terrapin through the beginning of Dew in the medical tent for heat exhaustion. Some of the reviewers who were there and did not like this show can have their reasons no questions asked because everyone can have a bad day, Ha, Ha...... just kidding........ Who can say what colors a show for a person, for me and others who have reviewed this show who liked it, I hope this review helps. My little back story is....... I spent most of my early 90's in the NH area and saw 9 Boston garden shows ( 6 in 93 and the last 3 of 94 ) plus other east coast shows, but wintered in Tucson for a few years and saw the first and second vegas runs. While back in NH during the summer of 94, I decided to go and visit my brother who just relocated in Boise and also see some shows. I met up with some heads and we went down to these shows. Yes, It was hot...... We camped out by Lake Mead, which for me did not work out. Between the heat and partying after the shows, I was burning the wick at both ends. The first 2 shows were good, but not stellar by any means. We would stay in the parking lot after the shows until 3 am and then head back to Lake Mead after, but then the sun would come up and it would be 95 degrees by 8 am and me with 2 or 3 hours sleep each evening/morning caught up with me......... and by showtime sunday, I was dragging..... I soldiered through for most part of the day and through most of the first set and part of the second set, but by the end of Saint, I started to feel really bad. Had to go to the medical tent until halfway though Dew, chugging Gatorade to fend off the rising Heat exhaustion symptoms but was able to finish off the show. After the show I had to be taken to a hotel room where some friends were staying and was put in a tub of cold water for a while. That helped a little. We then set off back to boise in a old VW bus, but it didn't have air conditioning and 20 miles outside of Vegas, I started to Convulse again and I had them take me back to Vegas where I got a room, cranked the AC and got a flight back to Boise the next day. Still can't handle the heat very well now....... Back to the show...... Even with my problems that night, I was just mesmerized by this show. Sure there were some sore spots..... So many roads, Tom thumbs and Victim is not my fav, but this one had some nice jams. Rest was phenomenal in my eyes. I pondered some of the reviews here and the only thing I can say is for people who were there and it did not do if for them, is that some things just happen to make it not for you. I perceived a charge in the air all night long and maybe you just did not tap into it. That and the playing for this era, lets face it, its not 73/74, was stellar, and they were as tight as I have ever seen, or heard the boys. Would love to have seen some earlier shows, but it didn't happen. Just glad I saw this one. Still my favorite even though i was not at my best for it.
Reviewer: bman1973 - favoritefavoritefavoritefavoritefavorite - June 29, 2016
Subject: THIS WAS A GREAT SHOW
I guarantee that those who say this was so so or not the best of 94, was not there and is either not listening to a quality recording or don't know what they're talking about. This was a magical show! Every song was played with intensity and the setlist was a dream! The sound hit you in the chest, it was like you could step up and walk on Phil's bass lines. I started seeing the dead in 92 and saw 53 shows and this one is in my top 5 that I saw! I don't understand how you can listen to this show or watch the 1st set on youtube (where's the 2nd set?) and say that this show is anything but 5 stars. You can't compare Eras, you just can't and as far as the Vince years this was the Dead at their very best! I would die for a SBD of this show or the proshot! C'mon start putting out more whole show vids!
Reviewer: doug_the_dude - favoritefavoritefavorite - September 4, 2014
Subject: --
So-so offering from '94 - there are plenty of better shows from this year - try 10/1 or 10/5, for starters...

I enjoy this first set quite a bit, save Jer's So Many Roads - this is really Bobby's set - El Paso, with that acoustic and Vince's 'cantina' intro and outtro, is absolutely wonderful; that middle section of MNS is as psychedelic as ever...

First part of the 2nd set works - Victim descends into that typical atonal madness, the Eyes is long, and Jer gives it his all on Terrapin - post-Space the band is somewhat out of sync, and Jerry mumbles his way through Morning Dew - it's been done a lot better.

Overall, some good moments, but those calling this the best of the 90s should, respectfully, explore the decade a bit more.
Reviewer: Augy - favoritefavoritefavorite - February 7, 2014
Subject: Definitely NOT the best of 90's, but a good set list!
The first thing I'd like to know is why would anyone be stupid enough to copy a digital recording to analog and then back to digital again, unless the one or both of them are totally desperate for a copy and there is absolutely no other way to obtain it? Because that completely makes no sence! Since the so-called analog in not really a true analog; rather a slightly hissy copy with the tiny gaps between the didital samples and then likewise the next is a slightly hissy psuedo-digital! Meaning it likely has new gaps in different places than the original gaps and even if that isn't true, there still is no way it can be considered a genuine digital transfer/copy which if it were as such, it must be an exact duplicate with no loss of qaulity! Futhermore, my last assertion must not be confused with mp3's or 4's or even 1's 0r 2's all of which just like photos of the jpeg variety, are indeed digitally produced, but due to their compression are drastically subject to very significant loss of quality upon each subsequent or should I say successive copy, even worse dare I say, than that of which I trust you are aware of that occurs when a similar series of subsequent copies in succession are made!
I was at all of these and yes indeed, "So Many Roads" was sweet; along with "Terrapin", and the improvisation, (I refuse to call it "Space" since their is no air in space, hence no sound, "The final frontier" perhaps), amongst others. However, the happy Head that said it was the best of the '90's must not have seen many shows in the '90's. Because for example, "Eyes of the World" was one of the boringest I've ever heard! On the other hand, parts were a good set list, like "Easy Answers", and some rarities like "The Shoe Fits" etc.!
Sorry to be so negative, and in fact folks have accused me of being overly critical! Yet I recall, (although it was in the '80's after I'd been accused as such; when I came out of a raging show which shall remain nameless, and saw a person who thought of me this way; I immediately said how much I appreciated the performance)!
But unfortunately, since I have far fewer recordings of the shows I saw in the '90's than I do from earlier, even though I can think of ones I was impressed by; it would be unfair to cite a specific date as better, (with the possibly exception of 1994-12-16, entirely with Branford Marsalis, speaking of "Eyes of the World"); before having reviewed the recording. So obviously then I could be certain of it's strengths and naturally, some occasional weaknesses, if any! In any case, thanks to this amazing archive that is gradually coming to an end, since it appears to contain virtually all shows from the '90's!

Other than the fall MSG and BG run what sounds better than this from 94'?

Of Course not as quality as fall of 89' or summer of 90', but comparatively to other post 91' Dead this show fares up their with the Cal Expo and Autzen 93' runs as some of the more quality later Dead.

If people are going to be critical of performance consistency and fluidity there are plenty of other shows to criticize before this one.

Here we have a 3 hour show in 1994 (a generally weak performance year IMHO) with a nasty 23 minute Terrapin, a solid first yet (yeah Jer flubs some lyrics in So Many Roads... so what? Watchtowers a bore, when isn't it?) Most importantly the band is somewhat focused rather than the "going thru the motions" spirit that unfortunately seemed to dominate the later years of the Dead.

Other highlights include an epic Eyes of the World, and a Morning Dew that might surprise you in its climax jam which is super on point. Unfortunately it cuts out about 20 seconds short of the end. We do get the entirety of the Climax jam, but still feel shorted...

As somebody who would rather listen to early Pre Vince-era stuff this is a show that was actually a pleasure to listen to.