So I am 8 months into my move from Maine to California and I have only seen some Jerry and Bobby shows at the Keystone Berkeley, as well as acoustic benefit in April at Berkeley High School and May 22 at the Warfield (my first visit as I missed the multi-week acoustic run in 1980 by only two months). Damn senior year!  Vist http://lostlivedead.blogspot.com/2009/07/may-22-1981-fox-warfield-theatre-san.html  for some great Corry342 analysis of those shows.

Then this show comes along. The other time I ever saw the Jerry Band without John Kahn. And his replacement is Phil. And many of my east coast friends are in town for the summer like Liza, Kelly and Pammie and Susan (?) and about one million more.  I think Buddah and Don and Jimmy had already left. Harriet can provide remember more than me. I do recall Steve Parish hitting on several of my female college friends that night too.

There are some awesome pictures that the amazing Bob Minkin took that night. Can I have permission to put one her Bob? I bought your book and am winning the KPFA bid on your 5-2-87 Jerry picture. For now, here is the link

Some say that Billy K was there this night, but I dont really recall.  I dont even recall if I say the shows in Berkeley the prior two nights, but I did know the first Greek theater shows were being held in Berkeley in less than two weeks and I was sitting pretty with tickets to each show.

This was a fun show at the little bitty venue in the famous town of Fairfax, many years before the Furthur rehearsal shows nearby in Mill Valley 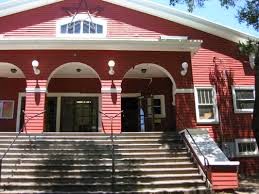 My 596 of Grateful Seconds tonight is the second song in the first set: "Mission In the Rain"
I only heard the Dead play this once, during my 2nd show 6-12-76 from the Boston Music Hall, and since Phil was there, this was almost the Dead.  Enjoy

FLAC
Mission in the Rain mp3