This was my fourth show in May 1978 road trip (in 9 days), and my 15th overall since my start on 06-09-1976 (Road Trips 4.5). I had recently seen the Bob Weir Band at The Veteran's Memorial Auditorium down the street in March and Jerry play Rhapsody in Red next door in Pawtucket the next night, but my first of several Dead shows in Rhode Island.  This was the first Dead show at the Civic since the very cool Dick's Picks 12 show in 1974 (see Extra Seconds Feature Below)

By the way, Dick loved this show by his notes below (and Dave loves this show by making it the 1978 rep in the 30 Trips box set in the future):

At the time, 1978 was a disappointment after the Monster shows, one after other in 1977, mainly due to the more repetitive song selection and the beginning of a real first set/second set structure. 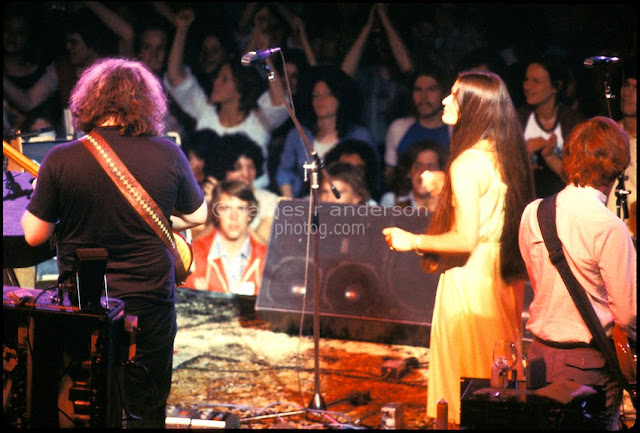 Can you see me in the second row??  I can't either. But below are Jim Anderson's awesome pictures of this show.  I think thats my brother Ralph right above Jerry's head

HOWEVER, I recently got the Listen to The Dead app for my iPhone, and randomly hit upon the Charlie Miller version of the SBD of this show. First, I listened to the opening Mississippi Half-Step, and wow, it's up there with the Englishtown 77, Boston 77, and November Upstate New York 77 versions. Take a spin below.

After that experience, take a look at the 1,000 Second (17 Minutes!) Let It Grow that closes the first set.  Now this is one for the ages. I hope you will enjoy.

This was my first show after the famous Mescaline Show in Springfield 5-11-78 (Dick's Picks 25).  Note that I was not personally on Mescaline at any of these shows. In fact, I can't remember what I did between these two shows. I may have gone back to Maine to take exams, or hung out in Rhode Island with Rick Sullivan and his buddy John (did he ever go to Law school on the west coast?).

Remember, one thing about this show. 1000 Seconds Of Let It Grow Are Incredible.

Here is your Let It Grow  All Files

The guy to your right in the homepage pic is wearing a Spectrum Batik. I'm good friends with the person who Batiks them. We gather annually in the mountains of NC to celebrate the Dead Of The Winter. Back in the day that was a major "taper" party where heads traded cassettes....
My first show was Boston Music Hall..small world.
Pig Street!

uh i meant the guy on your left

there are video clips from 4-27 if you need them. I love the 1st set Playing in the Band as the Dancing Mojo Dancng sandwich from 4-22