Those of you would boarded the bus in the 1980s amd 1990s may not know this, but Beatles sightings were more rare in the earlier days of the Dead.

Here are my top five Beatles memories with the band

Yes Bobby eventually would play this in encores on 6-23 and 7-17 1988, but there is a close tease in the magical first set of the April 23, 1977 show after It's All Over, Now about 7:15 into the linked track and immediately before my first Scarlet/Fire 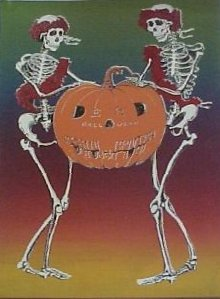 Th band played this 11 times total in 1983, 1984, 1985, and 1990. I saw the 4th version on Halloween 1983 as the encore at the show where the band played the final St Stephen.  Jerry is a little vocal weary and even "out-of-tune", but this was the first time I actually saw the Grateful Dead perform a Beatles song and this was my 65th show!  There is some funny audience interaction about half-way through the song.  It's Gonna Be Shobie-Do Alright, Bobby 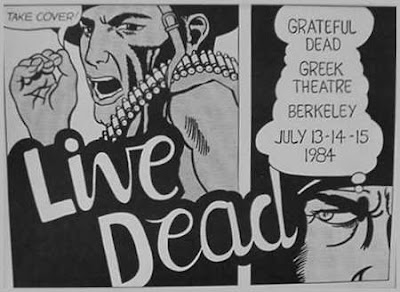 #2  Why Don't We Do It In The Road?, Open Set Two, Greek July 15, 1984
Brent fans unite.  Very fun set opening. Out of the blue, Phil and Brent start this. After Revolution at New Year's, this was not an obvious choice. The recording does not do the show justice. This was pure Berkeley mayhem.  Listen here 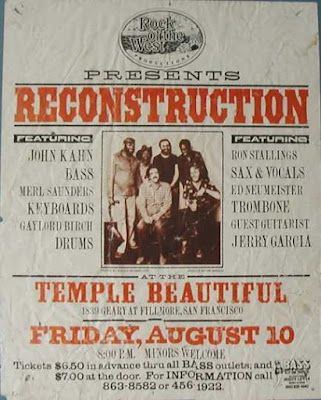 Hard not to place this first. Jerry could really sing Dear Prudence, but nothing compares to the first versions he did with Merl and Reconstruction in 1979. I saw at least two, but the last one I saw with Harriet at the big SF show on August 10 as a 27 minute medley with Sama Layuca into a weird space jam into Prudence. Look around, round, round, Jerry. This was one of all-time favorite grateful seconds with Jerry. For the full 27 minutes, use the listen here link above. For Prudence, just listen.to these 600 or so Grateful Seconds from the top-shelf Reconstruction.

Here are many I did not witness, and probably even more awesome and historic

Rain
After Midnight>Eleanor Rigby<After Midnight.   I wish so much I saw JGB do this
Day Tripper
I've just seen a face (69 setlist) http://www.setlists.net/?show_id=0453  not known if occured
Imagine   Instrumental with Merl
Let Me Roll You  Donna is great on these
Mother Nature's Son   Nicky vamp between songs in 1975
Paperback Writer http://www.deaddisc.com/songs/Paperback3Writer.htm  3-26 soundcheck
That Would be Something Boston 1991 is short but nice
watching the wheels 1995 soundcheck http://www.deaddisc.com/songs/Watching_The_Wheels.htm

There were a million Beatles covers post-1995 as well, especially with Warren and then Furthur of course. Also see: http://www.deaddisc.com/GDFD_Play_The_Beatles.htm  Thanks to c-freedom on archive forum here is a two hour youtube:
https://www.youtube.com/watch?v=a6SaCZs0oxs

While Vince was not exactly beloved for his own songs, he sang wonderful versions of both “Tomorrow Never Knows” and “It’s All Too Much” with the GD.

I’ve not always been fond of the GD doing the Fabs (They seemed have a better feel for Dylan,not to mention Chuck Berry) but those are two of the better Beatles covers they did.

I saw the, play “It’s All Too Much” at the band’s second to last show (Soldier Field ‘95). Along with Jerry’s final, triumphant “Visions of Johanna” it was the highlight of the show.

Then, on the other side of the performance spectrum, there’s “Hey Jude,” played twice in the 60s and (wisely) dropped, but they brought back in the 80s for those “Na-na na na’s” coming out “Dear Mr. Fantasy.”

Also, just to nitpick, the McCartney/Wings song Jerry did a few times was “Let Me Roll It” (not “You”).

Love this blog and your insights, Dave ... I hope you keep posting “many years from now” (Another Beatles reference for ya).