I never realized that the songs after Wharf Rat are missing in Grateful Dead History at Dallas 12-22-1978.  No Deadheads with a pen in Texas back then? I would guess Around & Around and US Blues except that's no fun.  So I'll guess they encored with Dark Star>St Stephen as a tune up for New Year's and then swore the audience to secrecy

In took only two weeks after the cancellation show in New Haven for the Gratetful Dead to be back on the road in December 1978 (and then the make-up tour in January 1979).  Jerry was still a bit below par in the voice department, though he rocked out on his guitar in each and every tune.

Three days after the only Mississippi show, we find the gang back in Dallas, home of many a good show. We can share

The Dead played Texas a lot late in the year probably because it was warm and nine nights before the monster Winterland show, they played all of 1978's Dead "hits", Shakedown, Scarlet Fire. Estimates Eyes and NFA Wharf Rat. The Dallas paper thought Jerry still had voice problems (fuck 'em) but played his guitar like ringing a bell. I like that Pete, the reporter thought they were playing Sugaree during the opening Shakedown Street.

Apparently like 8-25-1972, no one remembers how the show ends after Wharf Rat.  I'm pretty sure it was Dark Star>St Stephen as a warm-up for New Year's Eve as I guess above, but you can disagree.

There is a nifty interview of Bobby, which surprises me that Pete can talk shop to Mr. Weir but not identify Shakedown Street in 1978 (and Tennessee Jake). 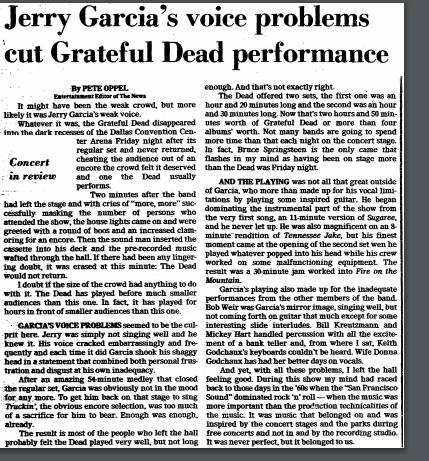 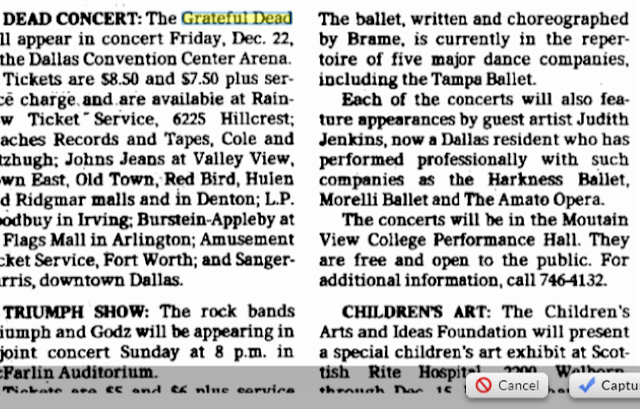 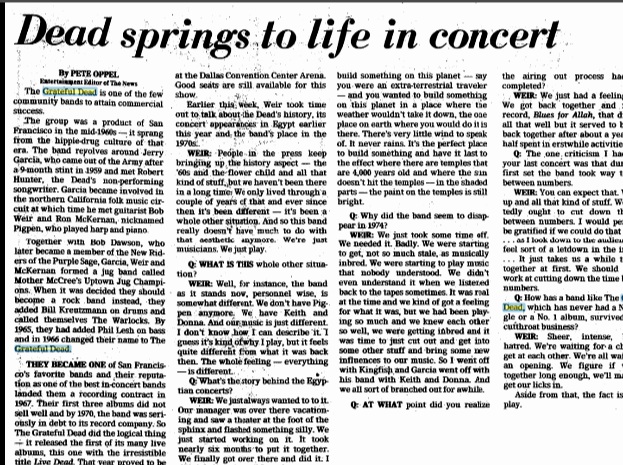