On Jerry Garcia's 27th birthday, two weeks before the Dead would play in front of 400,000 in Woodstock, Jerry and Mickey played two shows with the New Riders in front of maybe 100 maybe slightly more at the Bear's Lair at UC Berkeley.  Meanwhile in the City at the Family Dog, the Grateful Dead were scheduled to go on at Midnight. But, there is a problem, the Light Artists' Guild were on strike.  So birthday boy Jerry wore his Bluto shirt and would not cross the line.  Much fun to read here.    Note that the Dead did play on August 2 and 3 including this wild opener of the 8th version of Casey Jones. 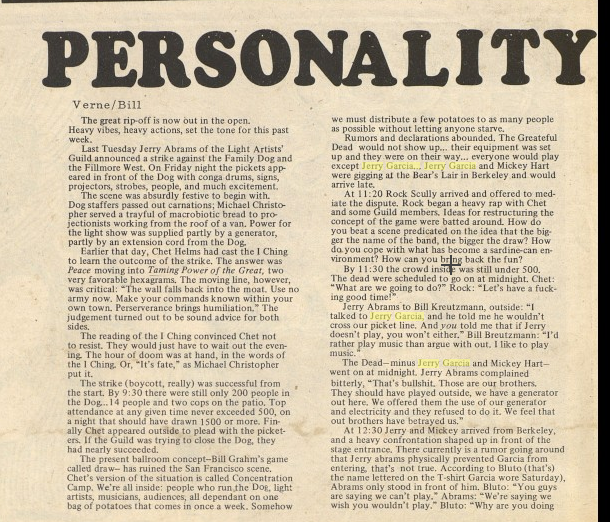 Hard2Handle
11 years 11 months ago
Light Shows on Strike!
I think I made all five August shows at the Family Dog - I remember Albert Collins - my first Commander Cody show (changed my life - again)!Do you guys remember which were the nights of the light show strike? They were picketing outside the F Dog - projecting the light show on the front of Playland. They had an extension cord coming from inside, and I noticed a handwritten sign in the window that said "Power supplied by the Family Dog," and as I was reading it, I noticed - thru the window - Chet Helms nodding and smiling. Everybody was debating whether to honor the pickets, or ashamedly break solidarity just to see the Dead. I'm ashamed - I crossed - I'd hitched all the way from Minnesota just to see the boys - but the joke was on me, as the lightists had convinced Jerry not to cross - "I ain't goin' in!" So there we were, watching Billy and Bob (scabs!) and maybe Mickey jamming. They said,"Anybody that can play can play." That wild guy that danced with everybody - remember him? - got up and played drums. I was too chicken, damn it. One night when Jerry did show up, they had a couple of guys sitting in on flutes - very informal. 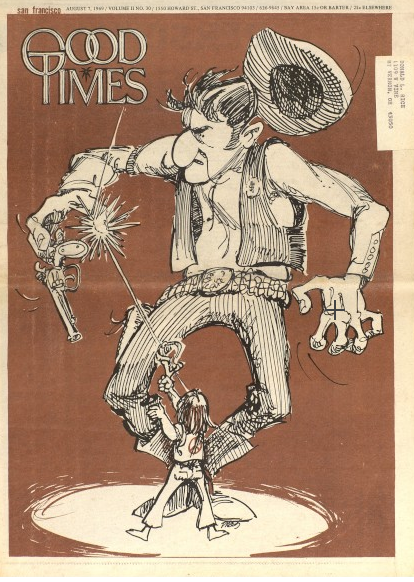 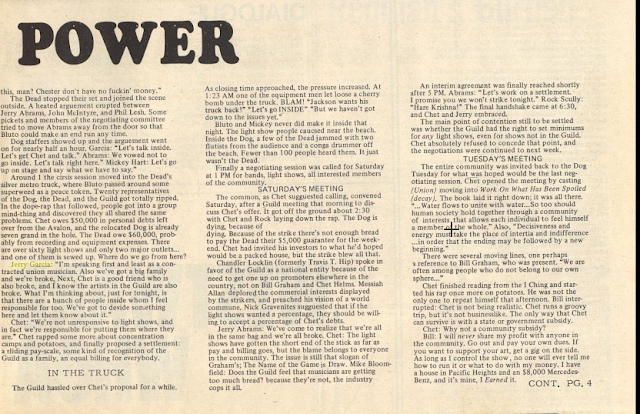