The week I first saw the Dead, they had discovered disco and they had applied it to the Marvin Gaye song penned in 1964 Dancin' In The Streets.  In honor of Donna Jean's entry into the Alabama Music Hall of Fame, I present you the Disco Dancing Dead that you hear now from Baltimore 1979, which was Brent's first version with the Grateful Dead during his fourth show.

Of course, Dancin' was never entirely disco, just an added element to the overall musical blend and eventually returned to its 1966 early Dead cover roots. For those keeping track 62 versions of the more traditional Dancin' In The Streets versions were played from 1966 to 1971, revived from 1984 to 1987, while the 60 disco versions were played from 1976 to 1979, with one out-of-the blue hybrid Bobby through as a curveball to the band in during a first set in July 1981 (more later). So it's was almost an even 50/50 split. My own experience was 5 of the disco versions including mfirst two shows in Boston in June1976, at the Springfield mescaline show in 1978 and Baltimore and Cape Cod in 1979.  My eight shows in 1977 saw exactly zero of  the 13 played by the band followed by two of the older version at the Greek in Berkeley to open shows in 1984 and 1985.  I one I regret not seeing the most is the 10-10-76 (my wedding anniversary to Nancy in the future ) with neatly-tucked Wharf Rat in the middle to end the first set at the Day on The Greek with The Who.  I have heard David Gans discuss this with Bobby or Phil once, but I regret being 17 in high school and missing it.

The New July 1978 Complete release is giving an official release to the known Red Rock July 7, 1978 Dancin and only available in audience St Paul 7-3-78 versions.  There is something in the water usually as the band loves to release Dancin  In The Streets shows as noted below.

Perhaps the most famous version is Cornell, which ends the first set and is the only song from that show officially released on the Beyond Description box as a bonus track. This version barely beats out the Harper College May 2, 1970 as the Deadbase favorite.  Other "best-ever" thoughts are May 22, 1977 (Dick's Picks 3) and my own Cape Cod 10-27-1979 (30 Trips Official 1979 Selectin) 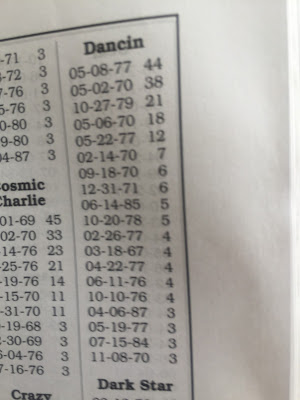 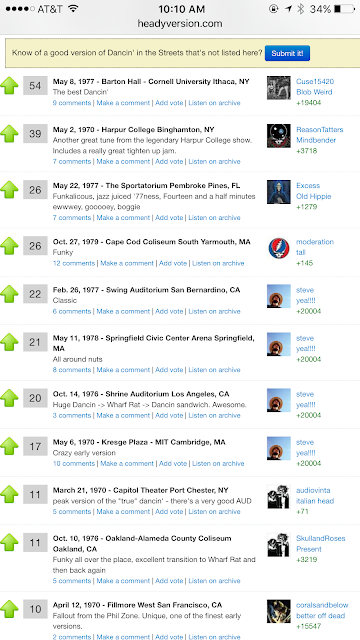 On a Tuesday night in Kansas City on July 7, 1981, according to a Jerry Garcia radio interview that month, Bobby started playing Dancin' out of the bluw after an opening Minglewood>Bertha  while the band had no idea what he was playing. That was what I call the hybrid version since it sounds like the last disco version, but the phrasing uses the traditional arrangement.

Dancin by Year according to Deadbase 11