There is no doubt, there is nothing like seeing the top-rated Grateful Dead concert  of the year, in this case it's the October 27 show at Vince McMahon's Cape Cod Coliseum in 1979.  And of course David released it as the 1979 entry in the 30 Trips series. 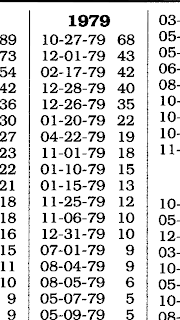 I had never seen a local review of the show. However recently I discovered that The Heights, a Boston College student newspaper did a fine thorough job of describing the show and the scene (although they missed The Caution Jam breakout).  Truth be told, I missed it too at the show at the time and only learned that I heard it years later similar to how I missed the Blackbird tuning in Springfield in 1977.

[Note: In Nov 2017, I was told by buddy Craig MacLean that he, my brother Ralph and I stayed at a freind's Aunt's house on the Cape after this show. I never could remember where I had stayed that night so mystery solved!]

You can enjoy here.  Also there is a tremendous review at http://www.deadlistening.com/2008/09/1979-october-27-cape-cod-coliseum.html 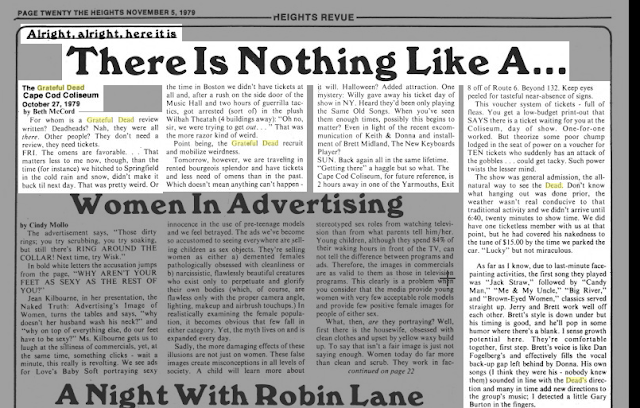 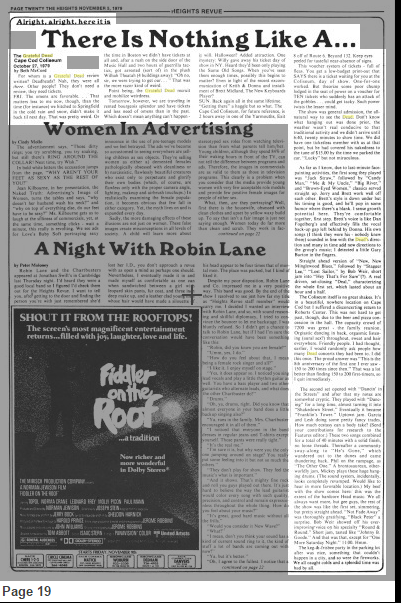 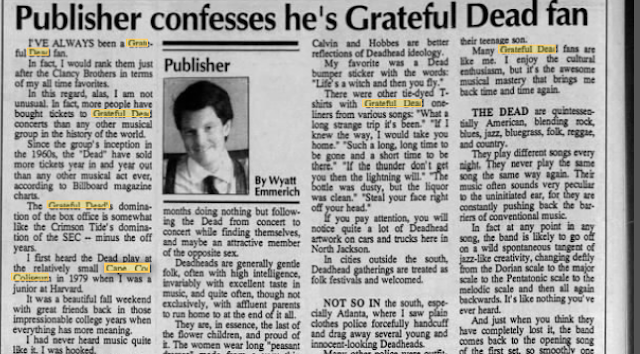 SOUTH YARMOUTH — Forty years ago Sunday, the Grateful Dead rocked the Cape Cod Coliseum, once the mecca of live music on the Cape.

The two-night run at the Whites Path venue was the only time the Dead played on the Cape, but recordings of the shows live on, and the first night’s performance is regarded as one of the band’s best of the era.

“I get chills when I think about that show still,” said John Stewart, who went to the first performance just days before his 14th birthday.

Stewart spent summers down the road from the arena and now runs a taxi business in southern Vermont. At the time, he wasn’t much of a Dead fan. He knew the hits, such as “Truckin’” and “Casey Jones,” but wasn’t ready for what the band had in store that night. Afterward, he gradually became a Deadhead and went on to see more than 250 Dead shows through the years.

“It was definitely a catalyst that got me interested in going again and again,” he said.

If you go
What: Owsley’s Owls tribute to 40th anniversary of the Grateful Dead’s only performances on Cape Cod

Details: “We’ll be using the set lists of both concerts to create a fresh mix of tunes that will be sure to feature popular favorites and deep cuts interspersed with double-dipped doses of psychedelic jamming,” bassist Nick Williams said.

“They are on fire,” the group’s archivist David Lemieux told Rolling Stone magazine in 2015. “There was always something about the Dead in New England — they were pretty darn spectacular. But some of the jams in this one are incredible.”

At the time, the shows did not seem to make much of a stir locally. The Yarmouth Register, the town’s weekly newspaper, ran a small blurb before the concerts.

“The ‘Grateful Dead’ country-rock group, famous for such songs as ‘Truckin’ and ‘Cocaine,’ will be appearing for two concerts on Saturday, Oct. 27, and Sunday, Oct. 28, at the Cape Cod Coliseum, White’s Path, Yarmouth,” the paper wrote. “Tickets will be available through Ticketron outlets, one of which is at the Coliseum, and will cost $8.50 for general admission. Advance sales have been heavy and the Coliseum management recommends that those interested should buy tickets or make reservations as early as possible.”

It was the first show for Bill O’Neill, of Centerville, a music writer and former editor at the Cape Cod Times. He was an undergraduate student at Harvard at the time, and although he was not a rabid fan, he went to the Sunday show with his roommates.

“It was mainly a curiosity thing,” he said.

He, like Stewart, only knew the hits and remembered being disappointed the band didn’t play songs such as “Sugar Magnolia” and “U.S. Blues.”

Bill Patten, a photographer in Marshfield, was in a similar boat. He was 17 at the time and went to the Saturday show. Like O’Neill, he had seen other big-name bands at the Coliseum.

“I was in high school, so going to rock concerts was the thing to do,” he said.

But seeing the Dead was not like seeing Van Halen or Black Sabbath. There were no outrageous outfits, opening bands or crowd talk to get the fans hyped up.

Instead the Dead came out, started tuning their instruments and went on to play for hours.

“It was unlike anything I had ever seen before,” Patten said.

At the end of the show, Patten realized he had not recognized a single song but loved the music. He went on to see Jerry Garcia play with his later band in 1983.

“I don’t know if I hadn’t seen that concert if I’d continue listening or finding out about the Grateful Dead through their albums,” Patten said.

The version of “Dancin’ in the Streets” from the first show is considered one of the essential live recordings of the song, and the fact that the band played “Franklin’s Tower” two nights in a row is a rarity.

To commemorate the anniversary, Owsley’s Owls will be playing a tribute show Saturday night at the Chatham Squire.

“We’re all a little too young to have seen the 1979 concerts, but there is certainly a lot of legend surrounding the Grateful Dead’s only pair of shows on Cape Cod,” the band’s bassist, Nick Williams, wrote in an email. “I hear the scene was absolutely wild.”

Yarmouth Police Chief Frank Frederickson used to work police details at the Coliseum in 1979. He said he remembered a wild party scene at the parking lot there, although he doesn’t believe he worked the Dead shows.

The venue could hold about 7,000 people, and police would regularly take 20 people or more into custody every concert.

Although 40 years have passed, the show still is remembered and highly requested. The Oct. 27 performance was included in the 2015 “30 Trips around the Sun” 80-disc box set, which featured one show per year from the Dead’s 30-year career.

“Through the years I’ve been asked for posters for the show,” said Dylan Stanton, owner of Instant Karma Records in Orleans. Bootleg recordings of the show also have circulated through the store over the years, he said.

Bob Seay, who used to work at the Provincetown-based radio station WOMR, went to one of the performances, although he could not remember which one. He touched on an aspect of the show that every attendee the Times talked to brought up: the sound quality.

“I do remember it was some of the best sound I’d ever heard,” he said. “The quality was crystal clear.”

It was Seay’s first Dead show.

“It was completely different than every other concert I’d ever attended,” he said. “I was so impressed. I can see why there are Deadheads.”

Apparently the Dead were supposed to play in Cape Cod around Labor Day 1974, presented by promoter Frank J Russo. This is weird timing; it must have been closer to the East Coast shows ending at Roosevelt on August 6 as the next shows were in Europe starting with London on Septemeber 9. 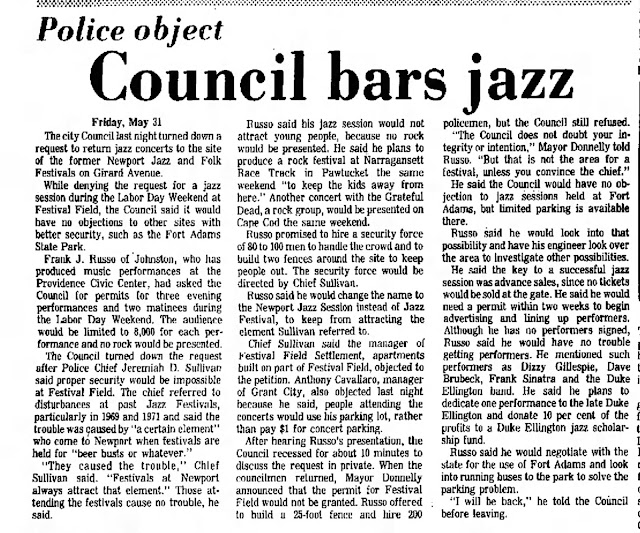 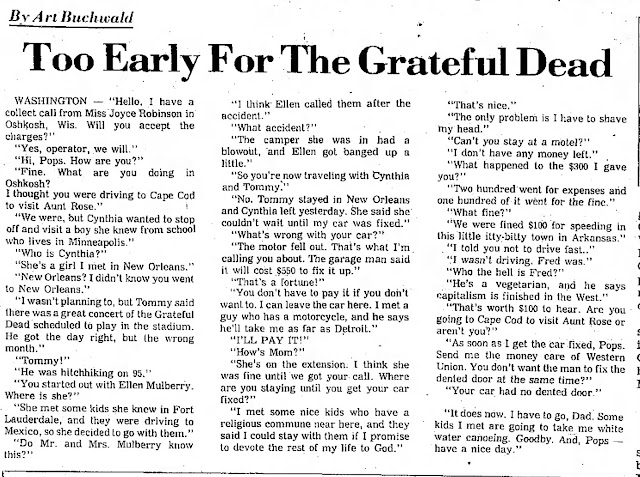 Document Text
The sale this week of the Cape Cod Coliseum for conversion into a warehouse has cast a pall on the resort peninsula's summertime rock followers. The 11-year-old 7200-seat facility had housed a league hockey club and an occasional pro wrestling program but it was the rock stars who were the main event.
Since the early '70s, many major groups have performed in the South Yarmouth arena, despite its glaring acoustic deficiencies. J. Geils Band, Dave Mason, Van Halen, Crosby Stills & Nash, Boz Scaggs, Doobie Brothers, Grateful Dead, Elvis Costello, Tom Petty, Ella Fitzgerald, Count Basie and his orchestra and the Boston Pops Orchestra have played there.
Two years ago, Linda McMahon who co-owned the Coliseum with spouse Vince McMahon optimistically voiced her intentions to book musical acts year-round at the Coliseum. The McMahons had been living on the Cape while Vince commuted to his pro wrestling tv taping sessions. The couple now resides in Greenwich, Conn., which gives Vince McMahon greater accessibility to the television scene.
What impact will the closing have? "I'm not sure it will be that great an impact because it's been just a seasonal facility," says Jane Gerraghty, agent with Premier Talent in New York. "But promoters are going to have to be more creative, and I'm sure more groups will be going to the Worcester Centrum, the Boston Common or whatever. I know a lot of kids are going to miss it, because they loved it. I'm not sure how many acts loved it, but it was a great steppingstone for them and it was always fun to be on the Cape in the summer."
The McMahons sold the property to Christmas Tree Shops, a retail store chain on the Cape.
For the past three years, hundreds of Greater Bostonians have been coming to the aid of the African Food and Peace Foundation. In order to raise money for the group which is funding the Uganda Food and Peace Project, a concert will be held Wednesday evening at 7:30 in the Boston Shakespeare Company Theater, 53 St. Botolph st. Performers will be tenor saxophonist Jerry Bergonzi, an alumnus of the Dave Brubeck Quartet, and Con Brio; Robert Fritz, and the Mark Johnson Group. General admission, which is tax-deductible, is $15. For ticket information call 741-0780 or 237-6450. Tickets are available at the door.