On March 26, 1973, the Dead played again a fine show in Baltimore, Maryland on a rainy Monday night complete with a character from Ramble On Rose.

The tunes are here. What else could you ask for from a 45 year old show?  Take the time and listen.

John Schulin since then became a famed sports writer and TV program writer as well.  He knows two sets of my old friends but does not know me.  Hope all is good John. 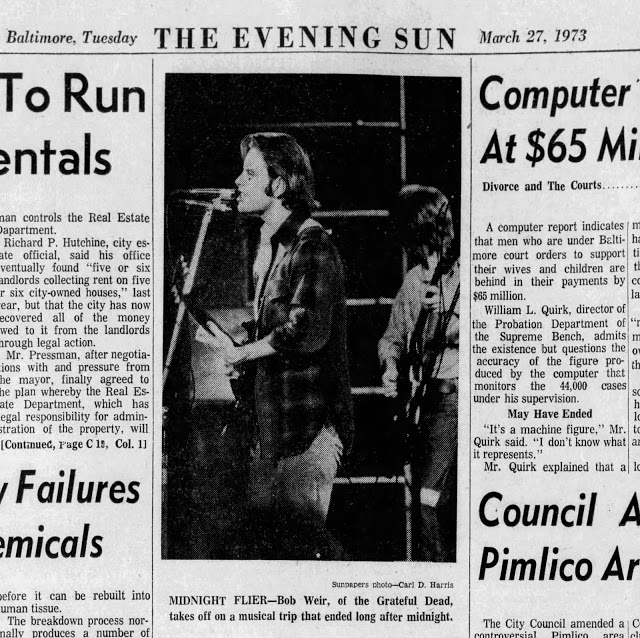 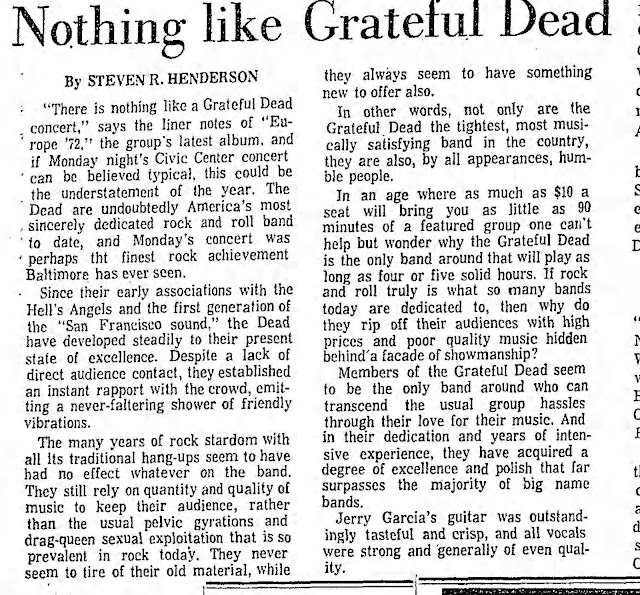 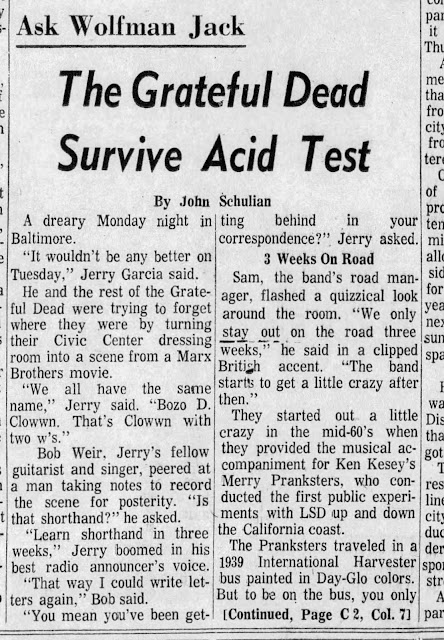 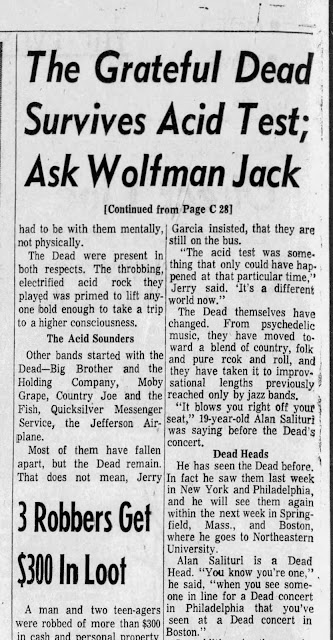 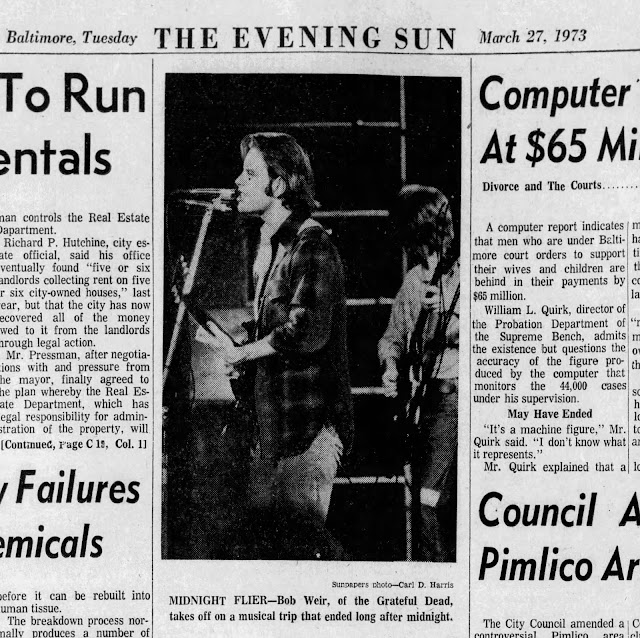 Reviewer: kochman - favoritefavoritefavoritefavoritefavorite - December 20, 2013
Subject: 2nd Set is Brilliant
Promised Land starts with great SQ and that fun sound we know.
Half-Step has a great tempo, especially this early in the game. The first solo by Garcia is a bit slow, though it picks up slowly.
Race is On is generally fun but a very prominent, and “where’s my martini” voiced Donna isn’t fun.
Wave that Flag is the rough creature that would become US Blues, still fun.
Jack Straw is nice, from fast tempo, to half time on a dime, and back again.
Sugaree is sleazy as ever, not the beast it would later become.
Mexicali is short and sweet.
Box of Rain well performed team effort.
Row Jimmy is rather poignant to me. It sticks out in my ears as I multi-task.
BIODTL
BEW has a nice country rhythm to it, drums chugging along nicely.
El Paso is another effort that does the trick.
China>Rider has a great tempo and feel to it. They get through the transition in a form we will become use to, Phil leading with some be-bop notes in the section of the transition that becomes a feature through the rest of their renditions of C>R until the retirement. Very nice C>R here.
LLR
Don’t Ease
PITB goes through a few phases in the journey of just under 20 minutes, and starts strongly right out of the vocals with nice wah sounds from Jer. Around 8 minutes we take a turn for the jazzier side of PITB. Slowing down after 9 minutes, it then heads into a strongly themed yet exploratory jam that takes us through the rest of the song. Generally it is a solid jam session.

Intro by Wolfman Jack
Ramble On maintains a decent tempo, and somewhat “lights up” as the Wolfman directed. Phil sounds great, especially toward the end.
Big River has the energy we all know and expect.
HC Sunshine is led in with some muted tuning, and then the solid intro. The jam segment is well played, keeping a pleasing tempo and featuring great Garcia licks. Phil is hitting some high notes, at the timing change in the middle of the jam, that are pretty cool, though this is by no means unique in this rendition of the song.
GSET is full of watery wah wah sounds from Jerome. A nice version but there are clearly better out there.
Candyman starts off with a slow tempo, but gets to a nice place when Jer blows away Mr. Benson. Nice, but short, jam.
MAMU
He’s Gone>Truckin>WRS Prelude>Jam>Wharf Rat>Bobby McGee
He’s Gone is mellow. They do into an extended vocal jam which subsides just after 10:30 to Jerry’s guitar hitting those familiar high notes, and we some instrumental jam as our reward. We get a 3 plus minute jam that stays between Gone and the upcoming Truckin theme.
Truckin begins with middling tempo, but precision playing. At the typical 5 minute mark we get the first of Jerry’s solos while the tempo has clearly gained momentum. He whips out some sassy intro notes, and then we head into the build up strongly coming out into the full blues theme/structured musical interlude we all know with more precision. We get a very bluesy jam that goes long (for Truckin) and maintains a decent head of steam, though I would like more. It sounded like Jerry wanted to perhaps head into Schoolgirl (or any the other related/easily segued blues tunes, Schoolgirl being most prominent to my ear), but it never happened. Around the 11 minute mark we get some momentum build up into a little segment I’ve never heard before, but it’s short lived, and as Jerry retreats into low, but higher pitched noodles, we’ve got Phil somewhat dominating. Keith puts in his two cents, and Jerry gets a bit louder as we get another minor build up similar to the thematic build up, which falls into more exploratory areas nicely. As it quiets, there are hints of Comes a Time and China Doll.
WRS Prelude in its early days. It starts low and smooth with cymbals accenting. The band, not ready for Part 1, instead heads into a beautiful, mellow jam lead by a poignant Garcia, the master of never overdoing it. 4 minutes in Jerry starts into some noodles, but still never overdoes it. Jamming like this, off the cuff, is what it’s all about. This is clearly the highlight of the show thus far.
Wharf Rat is great, solidifying the strength of this awesome meat sequence. Synched, nearly error free, powerful. The beginning of the instrumental power section of the song is where they have a minor flub which slows the momentum as they recover but with a slight limp.
McGee emerges from the tail end of the flight, to round out the meat sequence at well over 50 minutes.
Eyes>Dew
Eyes really comes right out of the end of McGee, with no real stop other than letting the previous song end. We’re buckled up? 25 more minutes of awesome coming your way. Eyes is beautiful, the 2nd verse jam has peaks into several nice little corners of groove.
The transition out of Eyes could have also gone China Doll, but Jerry pushes for the Dew, to my delight. Jerry either flubbed the lyrics, or there was a cut, I think it was a cut… it wasn’t a logical kind of flub and the music changed a bit. There was a seamless stitching anyhow! The build up to the finale is powerful and clear, with Keith putting in some great backing notes as Jerry gains us to the finish line, then switches into wah wahed fanning for a moment.
OMSN

This show contains my current favorite 'Playin', 'Greatest Story', 'Candyman', 'Wharf Rat', and of course the Truckin that melts into Weather Report is indescribably perfect.