September was an important month in my early interaction with the Dead.

September 1975 in my Grateful Dead world, I got a ticket for an October my first Jerry show in Boston!
September 1976, I waited for my Dead Relix to tell me what and where the band were even playing.
September 1977 was AAE (All About Englishtown)
September 1978 was Scarlet>Fire at Englishtown
September 1979 was a 30 minute drive from Bowdoin to Augusta to see Terrapin>Let It Grow
[followed by Sept 80 in Lewiston and Sept 81 for my first three at the Greek]

The set was started out typical for Fall 1979 shows, Brent was getting absorbed into the Hive, but after they started Terrapin, the show really got into gear.  I highly recommend set two, there was always magic in Maine.  (Bangor 1971, Lewiston 1980, Augusta 1984, Oxford 1988 and lots of shows in Portland come to mind)This was my 34th show out of 80, and my first on the East Coast, after, my three debut West Coast shows in June and August in Northern California (loved those first Oakland Auditorium shows). Sorry for the lack of my usual media comments and reviews, but Augusta is kind of island away from it all. Someone I went to the show with, left their car in the parking lot, and forgot and got a ride back to school (Mike M?). So later that night Jimmy Roux and I drove him back to Augusta to get his car.  Lucky this show was nearby.

Elvis Presley played at the Center during his spring 1977 tour on May 24, 1977. He was scheduled to return for two concerts on August 17 and 18. On August 16, Presley was pronounced dead at age 42 at his Graceland home in Memphis, Tennessee due to heart failure after years of prescription drug abuse.[1] The Center sold over 12,000 tickets for the two scheduled shows.
The Grateful Dead performed at the Center on three occasions, including a performance on September 2, 1979 and a celebrated two-night run spanning October 11-12, 1984. 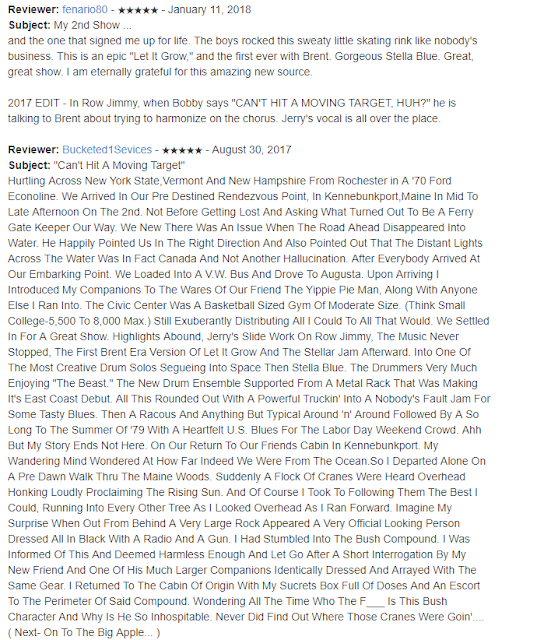 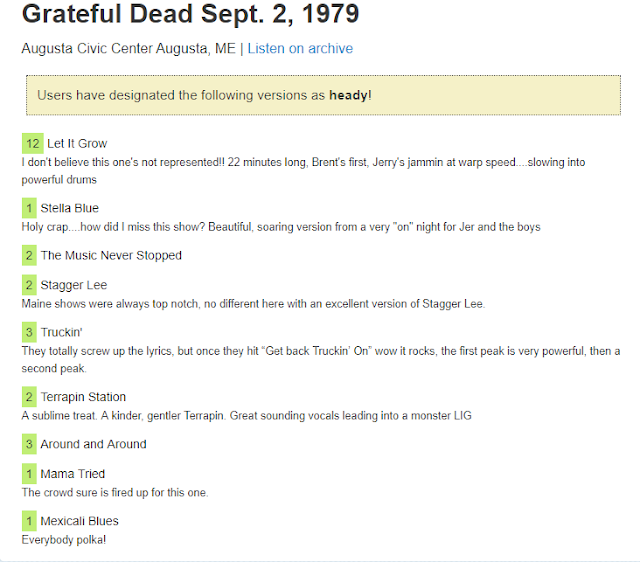 Reviewer: dcain - favoritefavoritefavoritefavorite - June 19, 2005
Subject: 22 Minute Let It Grow and...
Not only a long one, but inspired. A year and a half since last played, Garcia takes to it like a ravenous wolf. At 16:30-ish, he delivers licks so blurry-fast they sound like his synthed-up solo from the Terrapin record. Earlier (8:30?) Brent has a great organ solo. At 18:30 the thing finally slows down.

The audience, too, seems hungry, and very tuned in (they are clapping right on the beat on the second jam in Jack Straw; at the start of Around and Around; and when they bring it down around 5:30, really stunning).

The general sound quality here feels like one is sitting in the front row, not as if we are listening from a distance. But the audience sometimes drowns out the music, and Garcia is sometimes somewhat in the background (he is playing some great phrases in Mexicali, but they are a little hard to discern).
at March 30, 2018