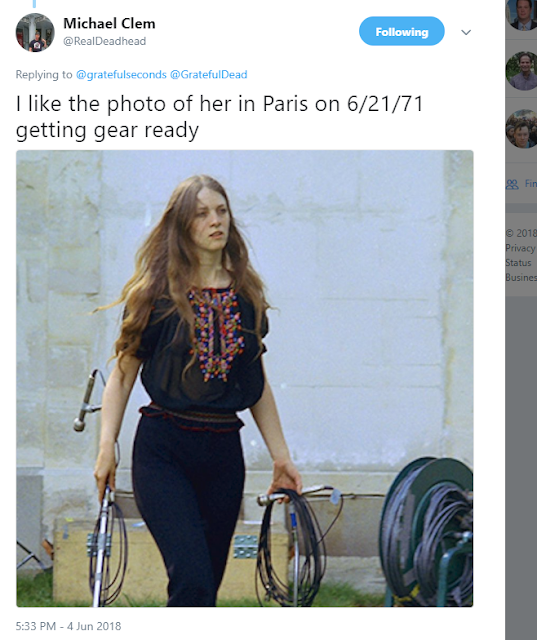 One night in the winter of 1996, Rob Eaton, a recording engineer who’d worked with Duran Duran and Pat Metheny, showed up at the home of a high-school chemistry teacher in Petaluma, California. Eaton had heard that the teacher had something that he and others like him were eager to get their hands on. He’d also heard that the teacher wanted to sell what he had for a million dollars, a sum no studio engineer was likely to supply. Still, one could always tender expertise. The teacher drove Eaton to a barn he owned, and they ran in through the rain. Inside, amid piles of junk, were three road cases, of the kind that rock bands use to cart around their amplifiers. Each had “Grateful Dead” stencilled on its side. In the first one, Eaton found, in addition to some rotting cookbooks, several dozen reel-to-reel tapes, caked in mold and silt. Most of them were unmarked, or at least too encrusted to read, but Eaton had an idea what some of them might be, and he felt a surge of excitement. The other boxes contained dozens more tapes, similarly degraded.
Eaton told the teacher that it was impossible to evaluate their worth, since they couldn’t know what was on the tapes, or even whether they were playable. The teacher grudgingly lent him five of the worst-looking reels, and Eaton took them down the road to a friend’s house. The friend was Dick Latvala, who at the time was the official archivist of the Grateful Dead, the keeper of the band’s fabled vault of live recordings, and an unapologetic enthusiast who would listen to old Dead shows for twelve hours at a stretch, notebook in hand. Eaton, too, was a longtime Deadhead—he had seen the band perform around four hundred times and had been making and trading tapes of their concerts for twenty years.
Eaton cleaned the tapes with cotton balls and alcohol, and Latvala loaded one up onto his reel-to-reel. The exposed outer layer—the first thirty seconds or so—was ruined, but as the music kicked in they realized they might have a treasure on their hands, a tapehead’s Nag Hammadi. They heard Jerry Garcia, the Dead’s lead guitarist, performing a set with the organist Merl Saunders, at the Capitol Theatre in Passaic, New Jersey, on September 6, 1973—a concert that hadn’t previously surfaced. Eaton and Latvala stayed up all night listening to the reels: other Garcia solo performances, a piece of a rare Dead show from the early seventies. The most remarkable thing was the crisp sound. They were first-generation two-track analogue soundboard recordings, with stereo separation among the instruments, a chunky bass, and plenty of air. 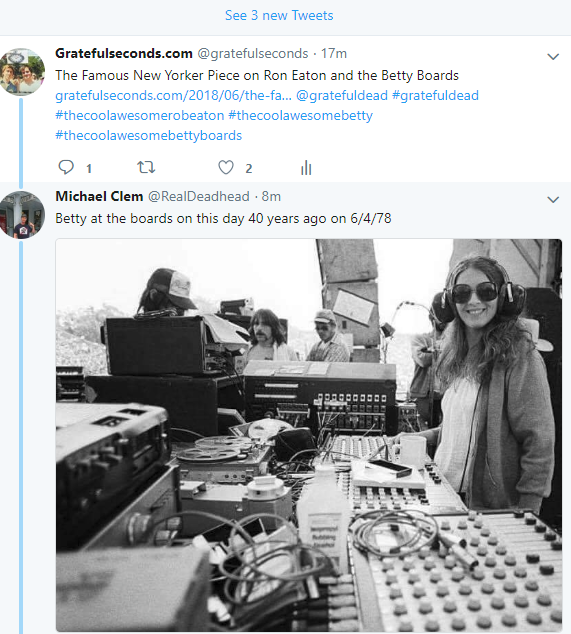 
Eaton and Latvala wondered if these were Betty Boards—tapes made by Betty Cantor-Jackson, a longtime recording engineer for the Grateful Dead. Almost from the outset, the Dead were meticulous about taping their concerts. During several periods in their history, Cantor-Jackson did the taping, mixing the soundboard feed directly onto a two-track tape as the music was being performed. (She sat offstage, wearing earphones.) In Deadhead circles, she was renowned for her ear.
In the mid-eighties, she got into a dispute with the band over money. She went broke and lost her house in a foreclosure. Her belongings, including her tapes, which she’d withheld from the band, wound up in a storage locker in Marin County, and in 1986, after she failed to keep up with the payments, the contents, many of them damaged in a flood, were auctioned off. The Dead and its delegates declined to bid, even though dozens of Betty Boards were missing from their vault, but a few hundred people showed up—a stoner’s “Storage Wars.” Several bidders made off with batches of tapes. One batch fell into the hands of some enthusiasts who cleaned them up, transferred them to a digital format, and began distributing immaculate copies to the vast network of Deadhead tape collectors.
Another went to the chemistry teacher, who was not a Deadhead, by any stretch—“I like the Doobie Brothers,” he told me. But a kid who mowed his lawn, a member of the Dead’s road crew, had suggested that he go to the auction. As he recalls, he paid about a hundred dollars for the three road cases, which were so waterlogged that it took four men to load them into his pickup truck. He was interested in the cases, not the contents. He drove them to the barn, had a look inside, saw a sodden mess, closed them back up, and left them there for ten years. Along the way, he learned about Betty and assumed that he might have some of her coveted boards. When Jerry Garcia died, in 1995, the teacher began looking for a way to sell them.
The teacher hired Eaton to restore his tapes. In all, he restored two hundred tapes—nearly a hundred hours of music. The teacher had Eaton sign a contract stipulating that he not distribute the tapes, but 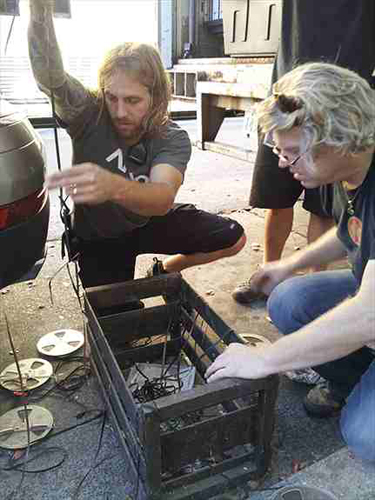 Eaton made digital copies. “The music deserved to be preserved and properly archived,” he told me. “It would have been unconscionable to let it go.” The teacher, meanwhile, reached out to the Dead, in an effort to sell the tapes. Through a lawyer, he says, they offered him a hundred thousand dollars. The teacher asked for ten times that. The Dead, reeling from the loss of touring revenue after the death of Garcia, reminded him that they owned the music, even if he owned the tapes. He didn’t sell. Still, before long, copies found their way into the vault. The music came home.
In 2003, the Dead released a four-CD live album from one set of the tapes, from a series of concerts that they had performed at the Academy of Music, in Manhattan, in the spring of 1972.
The teacher, now retired and the keeper of hundreds of rescued pet goats, still had the reels when I talked to him, in July. He didn’t want me to print his name, lest he become a target of theft. He was on the verge of being evicted from his home. He was still trying to sell the old reels, and said he’d recently stumbled on another box. He asked if I had a million dollars. I told him I did not, though I’d be eager to hear the tapes.
The first memory I have of the Grateful Dead is of a classmate in sixth grade telling me he’d gone to see them with his older sister. He reported that the band consisted of a bunch of hairy old guys in baggy clothes sitting on a stage eating spaghetti. It occurred to me later that he might have made this up, or that his sister had perhaps said something about “noodling.” I’ve since concluded that this would have been the band’s fall, 1980, stand at Radio City Music Hall, when the Dead, most definitely hairy and baggily clothed (though none of them yet over forty), opened each night with an acoustic set, during which a few of them sat on stools. I’ve never found anything in the literature regarding spaghetti.
Otherwise, I thought of the Dead at that time, if I thought of them at all, as some kind of malevolent cult, or, at least, a heavy-metal outfit, like Black Sabbath. A kid saw the iconography around—the skulls and skeletons—and imagined dark, angry noise. When I was thirteen, I bought an album of greatest hits, “Skeletons from the Closet,” and discovered that I’d been wrong. Many of the songs were delicate acoustic numbers with rustic harmonies and bouncy, if obscure, lyrics. There was some country, some folk, some blues, a Chuck Berry rocker. The lead singer, or one of them, had a delicate tenor. No Ozzy Osbourne, this guy. Maybe they really were just hippies who ate spaghetti onstage. It didn’t seem like much. Give me the guy who bites heads off bats. Give me “War Pigs.”
A few years later, I went to a boarding school where the Dead was something of a cult. The cool older kids had trays of cassette tapes of Dead concerts—copies of copies of copies, usually many generations removed from the original source, which might have been an audience tape (or aud, made by someone in the audience, with a microphone), a soundboard tape (made by someone who’d plugged into the main feed from the public-address system), or a tape of a radio broadcast.