So I guess the combo of Janis Joplin & Her Band and the Grateful Dead could only rate a Tuesday and Wednesday night slot in the magic month of February, 1969 in New York City. Weekends were saved for the real rock bands like Jeff Beck, Frank Zappa, Ten Years After, Buffy St Marie the Vampire Slayer and Vanilla Fudge.

Luckily I recently unearthed a little review from Cashbox Magazine so you can get another flavor of those midweek nights back 48 years ago since February 11 was released twenty years ago in October, 1997 http://www.deaddisc.com/disc/Fillmore_East.htm 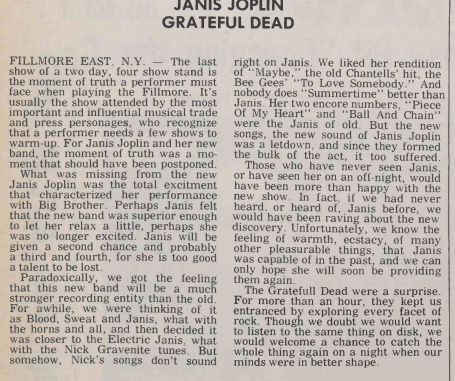 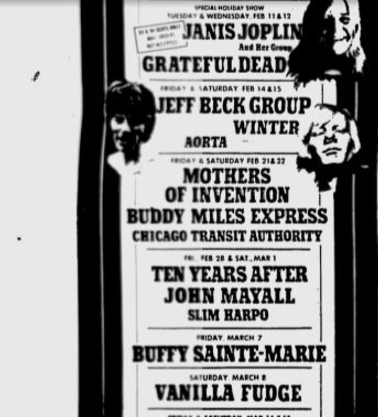 The unnamed reviewed caught the late show on the last night and seems to suggest that Janis had an off night, or that she hadn't jelled with her new band yet. But, our heros come to the rescue once again "The Grateful Dead were a surprise. For more than an hour, they kept us entranced by exploring every facet of rock"  Obviously, the reviewer wasn't too aware of the magic that he was viewing or the four shows that were to start in just over too weeks at the cousin theater West in San Francisco.

Deadbase thinks the setlist for the late show was the typical, but amazing, Duprees, Mountains, Dark Star>St Stephen>The 11>Death Don't, Alligator>Caution, but "could belong to the early show."
To see the latest thinking of what the Dead played at the late show, on February 12, 1969, I go to deadlists.com, which says:

adding Feedback and Bid You Goodnight, but alas missing a big chunk of the Dark Star
You can get this here.

Janis set that night is available

http://www.concertvault.com/janis-joplin/fillmore-east-february-12-1969.html
Unfortunately this recording was the early show according to a youtuber.

1blastman5 months ago
This was the early show, the late show version of Ball and Chain was a lot longer, the late show went until the wee hours of the morning. It was almost 4 am when we left the Fillmore.﻿