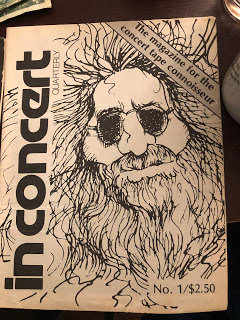 Baby Driver director Edgar Wright did a nifty zombie film about 14 years ago called
Shaun of the Dead.  Little did I realize when I recently rediscovered  a 40 year old Grateful Dead Fanzine called In Concert Quarterly, that I was able to meet the real Shaun of the Dead.

Meet Shaun D. Mullen,  publisher of a long lost Grateful Dead fanzine (now found in my garage!) and nominated for five Pulitzer Prizes.  Here is a little mini bio from Shaun's blog. If you do a little Google search, you will see the extent of this man's very impressive career. I always enjoy seeing whatever happened 40 years later to that guy you may have met at a show at the Palladium or Springfield. 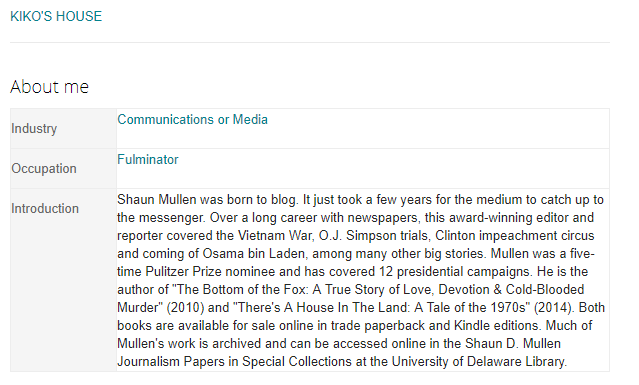 As early as 1973 Shaun was writing about the Dead. Here's one I found. 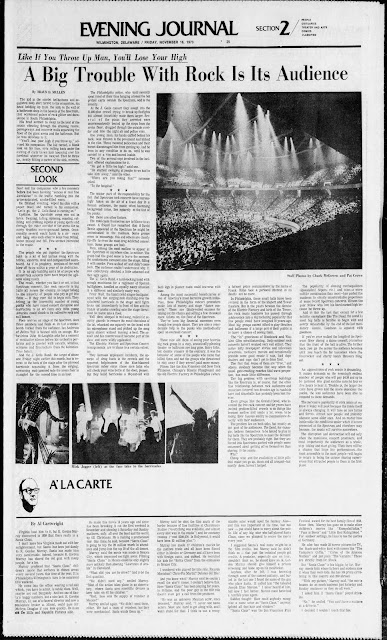 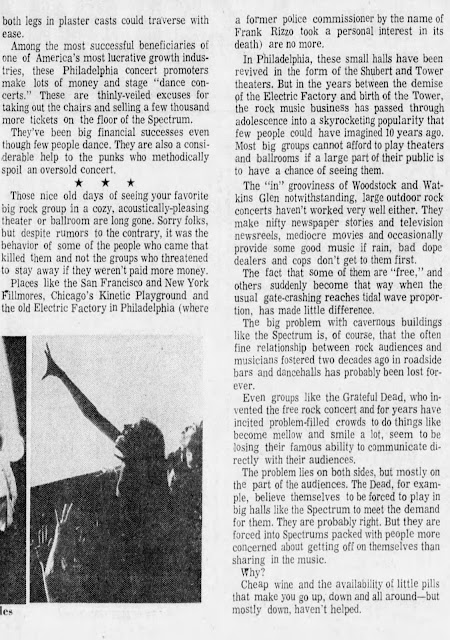 And here's a little taste of Shaun in 1977, which he believes is the peak of the Dead's career.  Shaun did see numerous East Coast shows in the 1972-1974 era as well as the 1976 Orpheum and Who shows in Oakland.


I am really happy to see Shaun call Estimated Prophet "California" here because to all of us on the East Coast in the Spring of 1977, California was the name of Bobby's cool new song. 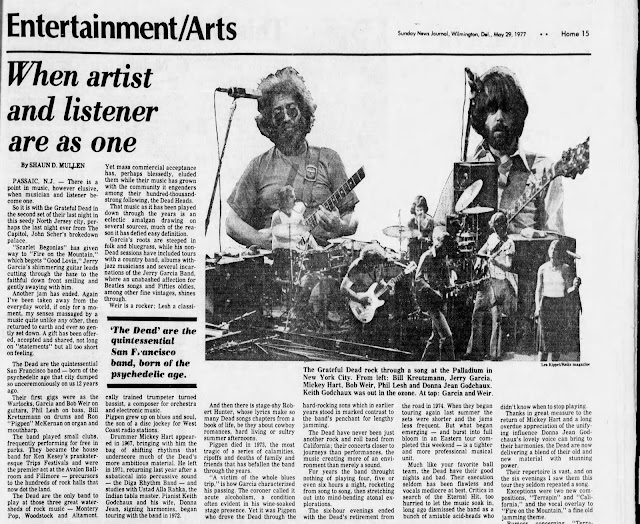 But let's get to In Concert Quarterly.  In the summer of 1979, I had come to California for the first time and got to see three Dead concerts in June and August and three of four Reconstruction shows throughout the summer before heading back to Maine in late August.  Sometime that summer, I became aware of In Concert Quarterly, probably through an ad in Dead Relix.

Relix was evolving in 1979 and before the end of the year would move significantly away from all Dead 24/7 to cover punk and a bigger variety of music.  So It was cool to see another entry into the Fanzine world.  This one was super cool because we all got to write tape ads with our subscription (see mine below)

This was back in the days before The Golden Road, Unbroken Chain,  and Duprees Diamond News.

This new entry looked promising and in the first issue dated September 1979, there a cool Richard Codor drawing of Jerry and some folks I knew involved in the publication. 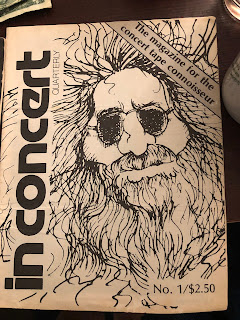 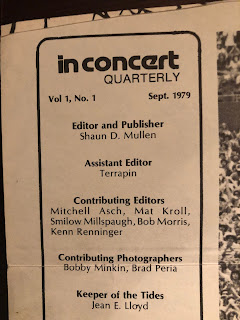 I was just starting to know of Bob Minkin and I had recently toured the first six Brent shows on the East Coast May 3-9 with Bob Morris and my then GF  and his then GF.  Bob, who reviews one of his own tapes  of the Binghamton China Cat return show (5-9-79). Bob has more than 150 recordings on the archive. https://archive.org/details/GratefulDead?and%5B%5D=bob+morris&sin=

I recommend you get the PDF of both issues. You can get them with link
Both Issues in PDF


Another interesting item is that Richard Codor, who did the covers for both issues is a very known illustrator to this day http://richardcodor.com/


Shaun tells me he started his publication when he had retired as a journalist, and I'm glad he changed his mind when you look at what he did over the last four years (a couple of books, 10,000 ish articles, etc, etc).  Like most business startups, this one didn't make the distance due to money (or lack thereof)

He started to fade away from the scene in the early mid 1980s (like me and many others), but certainly did Not Fade Away from life. Thanks Shaun for letting me reissue your fanzine and talk about you a little here


More of Shaun of the Dead

As Shaun said to me, I say to Shaun
Onward through the fog, Shaun 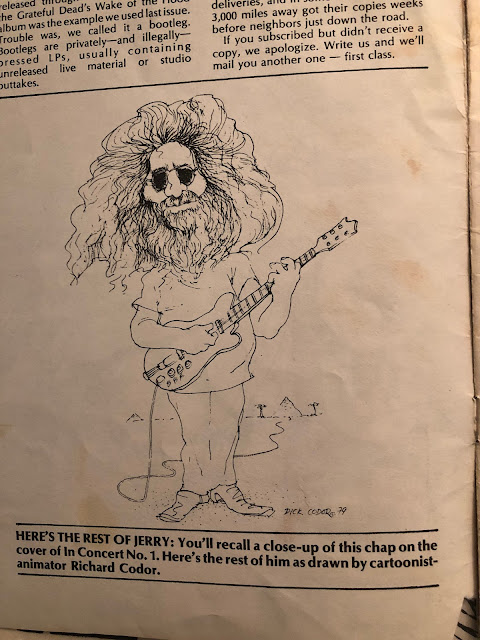 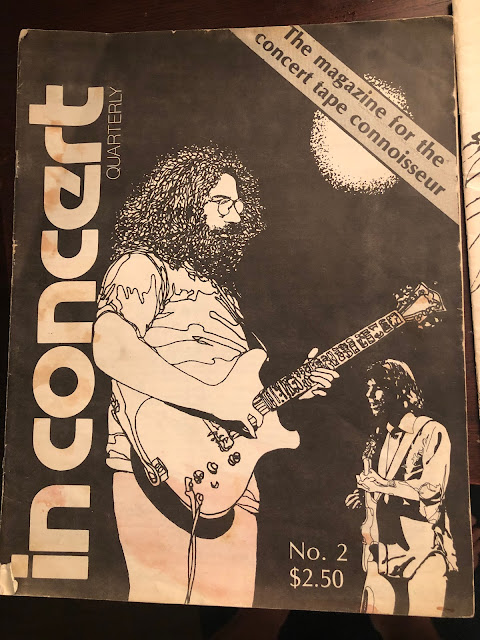 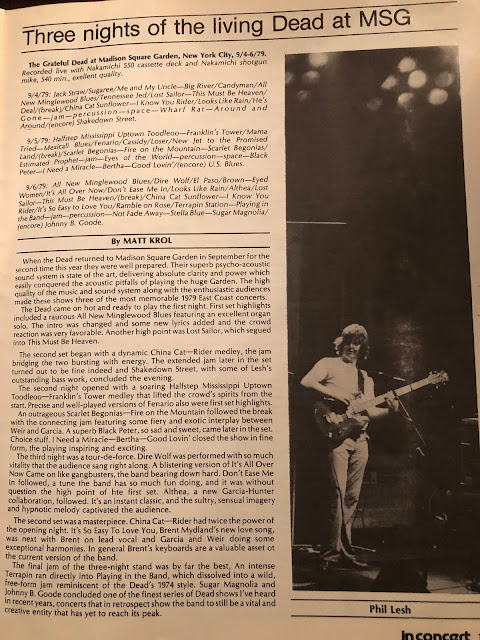 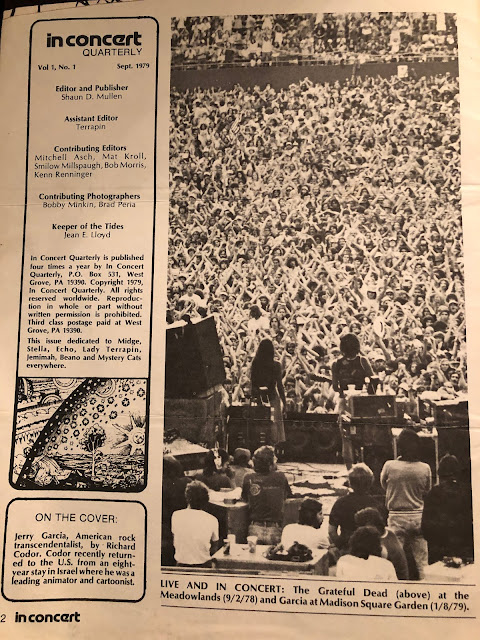 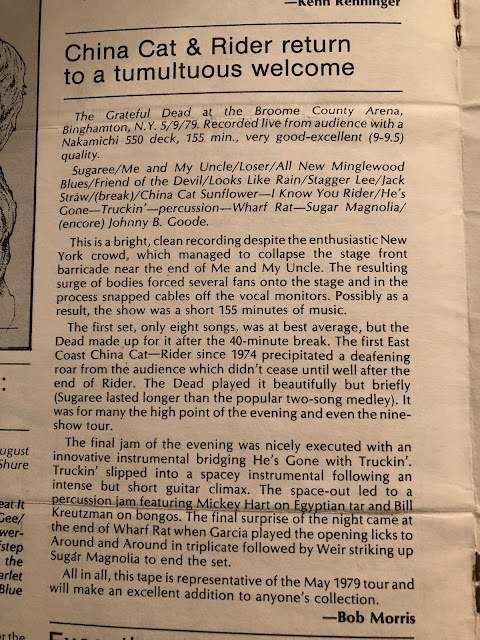 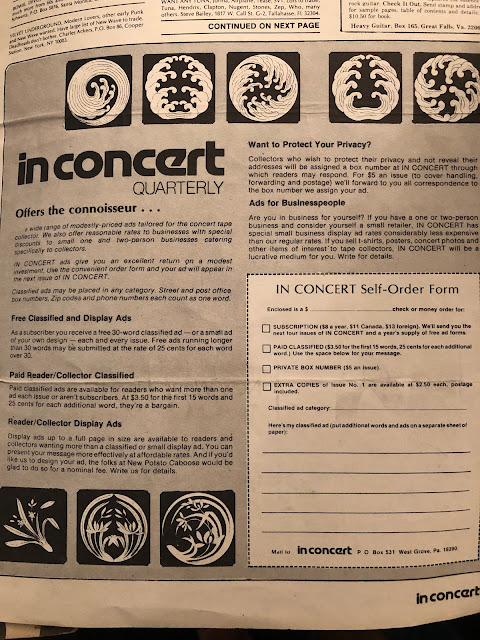 Great post.social media I love the informative style you adopted. Clear and easy to understand