Some Of My Favorite 2015 Grateful Dead Blog Posts

I'm sad this blog isn't updated any more, but the effort that went into this blog was inspiring. The writing is priceless here and one of my top-3 shows I attended:

Strip away time. Erase the day of the week, the month, the year. Tumble into a kaleidoscope of color. Pass through the membrane. Be the membrane. There never was a membrane. You're back at a Grateful Dead show.

When they did it well, it was all about the evaporation of everything that grounded you to the here and now, yet allowed you to slip all the way into the here and now just the same. The Dead's musical muse simply was. It didn't evolve so much as slowly turn, ever-present in the light. A telltale sign that the band was coaxing the muse out came with the strong impression that you were no longer hearing music being played right now. More often, the muse simply sounded like the Grateful Dead, echoing backward and forward, un-tethered to "today."

Here's a show with the opportunity to echo as far forward as it could backward. Played in 1980, it stands at the center of the Dead's 30 year career.  This is too coincidental a reason, I know, but the show is indeed packed with muse-infused moments. On 9/6/80 the music played the band.

Here is a Top-Shelf historian at the top of his game (I saw these shows and 12 more here including New Year run's in 80, in 81, and the two Etta James shows in 82):

For the next seven years, both as the Oakland Auditorium and the Henry J. Kaiser Convention Center, the building was the primary host to the Grateful Dead's New Year's celebrations, and other shows besides (save for the years that the building was being remodeled). As the Grateful Dead moved from being Dinosaur-like fossils from a bygone era to heroic survivors of the Classic Rock genre, the shows at Oakland Auditorium were Exhibit A

Another pro, a mentor.  Here is a great tale of the only show I ever made a recording at:

Starting with McCoy Tyner's "Sama Layuca", they drift into a very spare space for a couple of minutes before Garcia starts picking some beautiful melodic stuff that morphs into one of the early Jerry versions of Dear Prudence. I used to say that the melodic passage contained Jerry's most beautiful stuff since the 2/18/71 "beautiful jam" between Dark Star and Wharf Rat, but I eschew such hyperbole here.

Maybe the all-time expert, Light Into Ashes,  In one of his million highly researched posts, he brings the Dead fan, so much information and insight.  I love knowing, as mentioned in my Dark Star last week, that my 12-31-81 Star sucked in comparison, but was still fun and still Dark Star :):

So this Dark Star shifts gears now and then (like around the 12-minute mark, though it doesn't go anywhere particular). The second verse is delivered with a lot of punch; and unusually, the Dark Star jam continues for a little bit after the verse while they figure out what to do - Bertha is a novel choice, kind of inspired.

I'll add more but these are some of the best. Note all these particular exempts are from shows I attended. I'll add music links as usual. 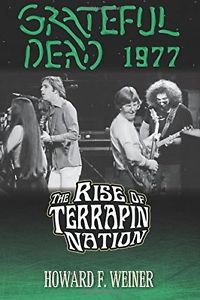 Howard isn't a blogger, but his books on JGB and Dead 1977 are awesome.