Well I was there 35 years ago tonight in Oakland. And I enjoyed a nice Let It Grow>Deal , Shakedown, He's Gone>Truckin and even a beautiful China Doll just a little nervous from the fall. But I didn't hear the It's All Over Now, Baby Blue, the To Lay Me Down or the Youngblood ! or the Searchin'. Joani Walker, who I met a few times like 5-3-79 in Charlotte and in Berkeley in 1981-82 got to see it. But not me.

In fact, I didn't even know about this sound check until about 2008. But it was 35 years ago tonight. Charlie Miller put this up on lossless legs about then.  Archive has it here. 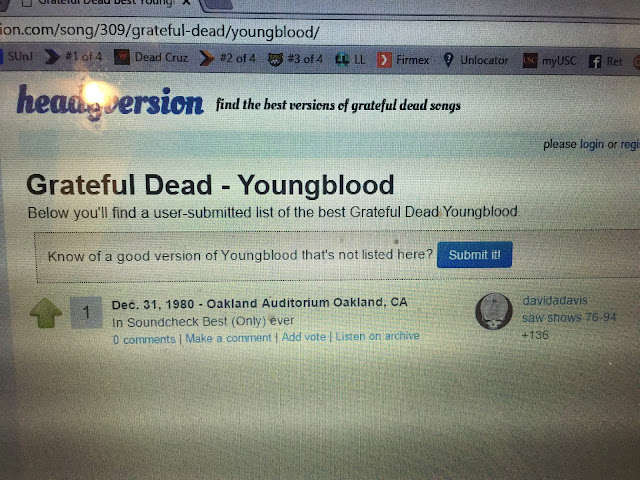 2. To Lay Me Down, a staple of the acoustic shows since September, but not played electric since 10-19-74 Winterland.  We would hear this acoustic on the next evening on New Year's eve. We would start hearing it electric in March 1981 including a 9-13-81 Greek gem.

3. Youngblood, never played by the Grateful Dead ever, although Bobby played it with Kingflish last on 4-29-76, and would pick it up again with Bobby and the Midnight in January 1981. I saw Bobby at the Keystone Berkeley on 1-26-81 (that's the night I passed out for 5 seconds from some oxygen thing right as Bobby walked passed me, but woke before the Youngblood).

So rare, I'd say rare. And I was there, probably 300 feet away, outside the door, in the cold and never knew for 28 years this occurred.   Well, happy 35th birthday soundcheck.  Next time, invite us in from the cold.  The songs playing are the complete 12-30-80 soundtrack that is known.

Email ThisBlogThis!Share to TwitterShare to FacebookShare to Pinterest
Labels: 1980, 1980-12-30