December 1971: A Forgotten Pinnacle of the Grateful Dead's Career


December 2020 edit
a beautiful letter from 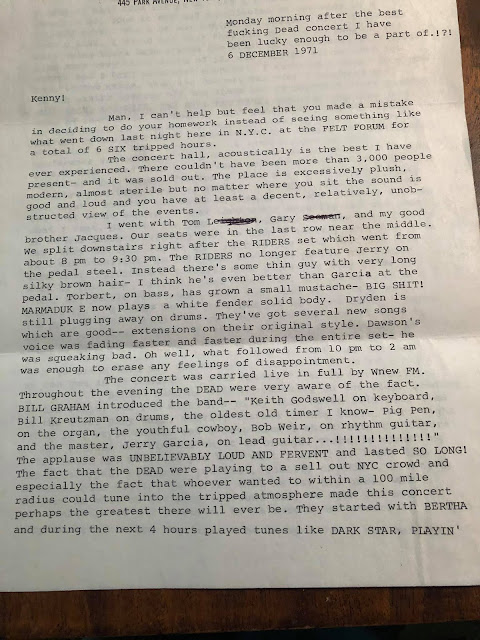 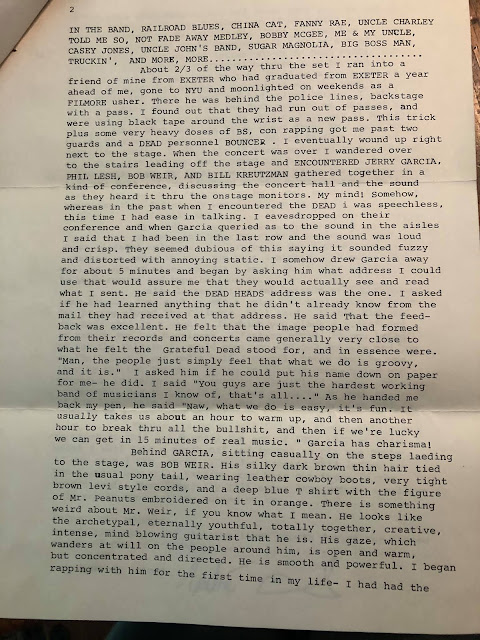 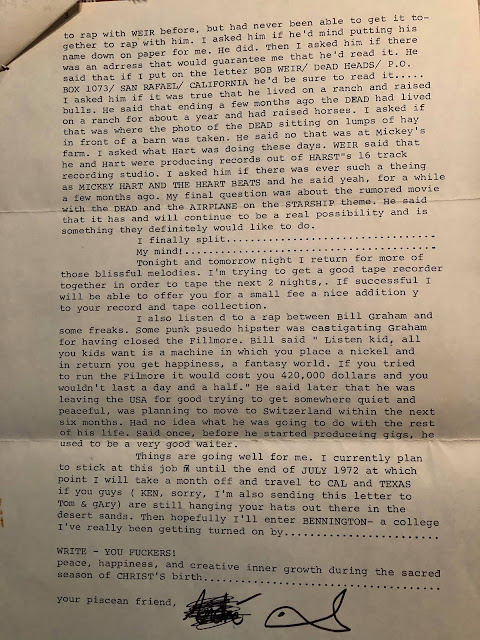 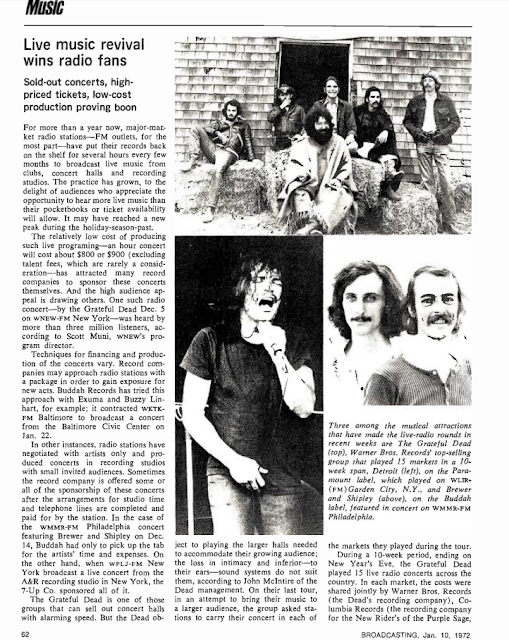 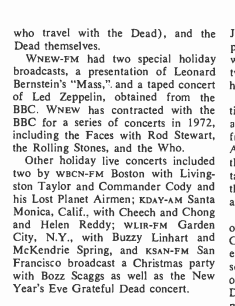 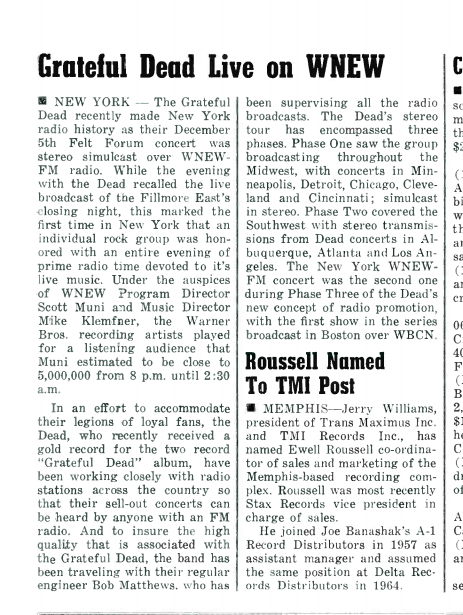 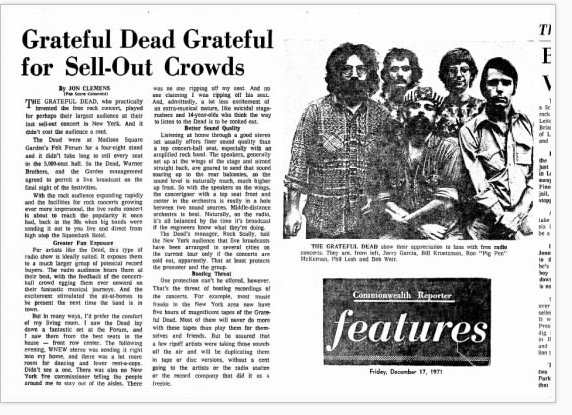 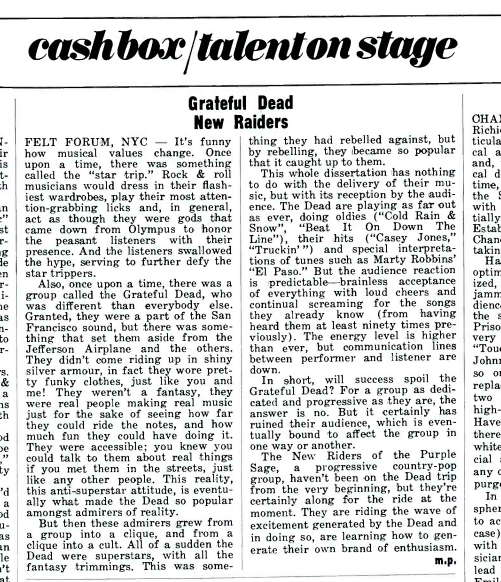 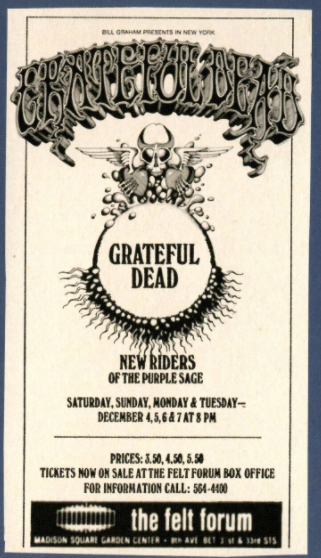 There is a great resource for Dead Heads at deaddisc.com.  Today, I double checked and saw that the only official release from this month is two tracks from New Year's Eve at Winterland of Jam>Black Peter. http://www.deaddisc.com/disc/Closing_Of_Winterland_Bonus_CD.htm  This appears in a very rare bonus disc to the Winterland Closing 1978 DVD or CD, so basically nothing has been officially released from a very high point of the Grateful Dead's career.  This might be a bigger omission than the Berkeley Greek shows void (My Berkeley Plea).

What is special about the 11 shows (there's that number again) in December 1971 is the New Riders opening act, the energy of the performances, the great sounding FM broadcasts (covered so well here at Lost Live Dead), and the first two weeks that paired Pigpen with Keith.  Let's look at the possibilities. 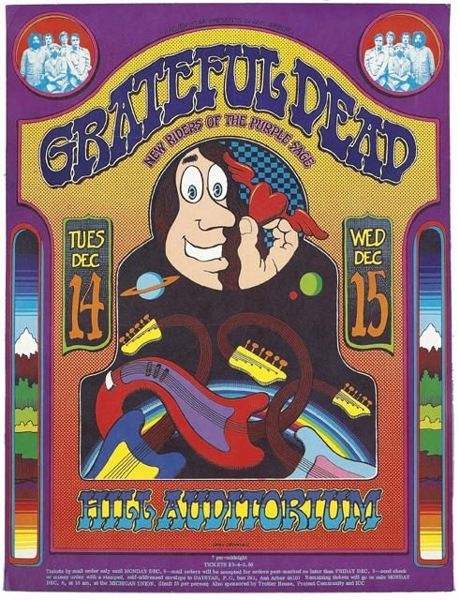 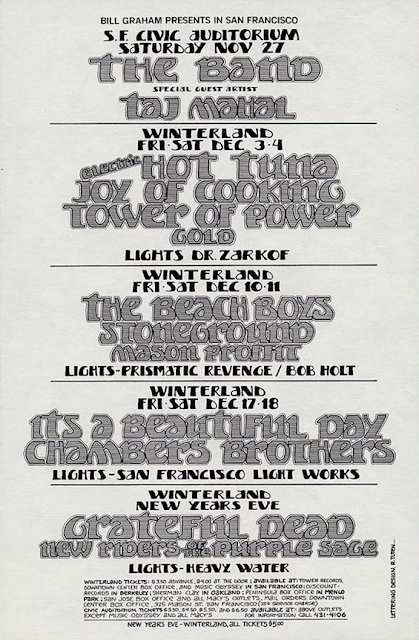 Four cities that loved the Dead, Boston, New York, St Louis and SF, and a great two night stand up at the University of Michigan. How about Dave, a nice 30 CD set of December 1971?

After Keith's debut, sans Pigpen, on October 19, 1971 in Minneapolis, the Dead embarked on an 18 show tour ending on November 20th at UCLA. We saw some shows as:

Pretty choice stuff for a debut tour of a new keyboard player, but Keith hit the grown running. I saw an online poll yesterday of best Dead keyboardest and Keith finished behind Brent and Pigpwn with 15% of the vote. Crazy, I think. Keith was the bomb from 1971 through 1977. No question, hands down the spark and the best keyboard player from the start. Listen to the Charlie Miller SBDs of his first shows that came out over the oast few years, or any of these releases above, especially Halloween 1971. These shows are priceless. But December is even better.

I know, deadbase 11 reviewers, April 71 at the Fillmore, the 2-18 breakout show with the beautiful jam, the Fillmore West closing 7-2 and The Harding on 11-7 are awesome shows, but I can not agree with those that place the December shows so low in the rankings. From Deadbase 50, page 651: 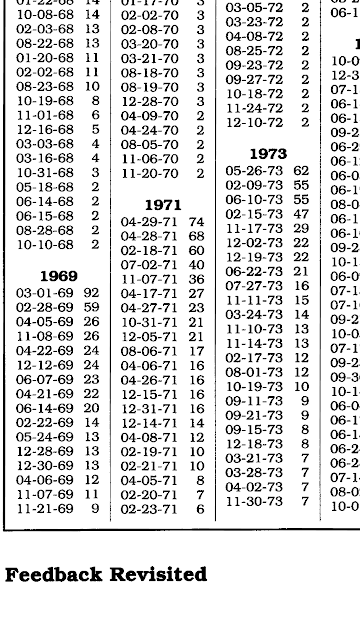 6. December 1 at the Boston Music Hall

Rare Dancing In The Street opener (only one between 1970 and 1976 revival), and nice Truckin>Other one jam>Me & My Uncle>The Other One followed by Jam>Black Peter to Open Set Two.


3. December 4 has a once only jam that surrounds The Other One with the cowboy songs

2. December 10 in St Louis at The Fox has a world class set two


1. December 5 improves upon that with my favorite show of 1971. The Charlie Miller SBD that is included in the music section is 210 minutes of pure Dead bliss.  You can get that FLAC in the music section as always. You are now hearing the crunchy pre-SBD which I like just as well.  Maybe I love this show so much is that I originally heard part of it on a great sounding bootleg record I bought in 1975 or 1976 in one of those indie record shops down some steps in Cambridge, MA near Harvard Square.  The cover is that shot of Jerry you see in the soundcloud photo.

This is just such a great sounding show with great FM commentary, and maybe the second best Bill Graham introduction (after August 13, 1975.  Muddy Waters should have been played more than this time. The second set Dark Star Jam (no lyrics at all) weaved into Me and My Uncle and Sitting On Top of The World is sublime. Get the Flac.

For those of you that have made it all the way here, I have an early Christmas presents. It's all eleven shows. Note the December 5 mps are the crunchy one, and the Flac is the Charlie Miller.

This is amazing! I've been grooving to December 1971 for a couple of weeks and think it's some of the best stuff ever. I love that both Pigpen and Keith are there. The whole band really seems to be on fire just about every night.

On a whim, I Googled Grateful Dead December 1971 and found your post. Wow, is all I can say. Oh and thank you, of course.

Would you mind if I shared this?