Here it is folks, the best Grateful Dead first set opening sequence in the last 40 years.

At the famous pre-Fire on the Mountain, Happiness Is Drumming Show at the Tower in Upper Darby on June 22, 1976, the band opened with US Blues, The Music Never Stopped and Crazy Fingers>Comes A Time.  Enjoy  here

(Ok those Dark Star>ST Stephen>The Eleven openings etc were the bomb, that's why I said "Modern")

A guy below me thought the Tennessee Jed was a bit weak, but I beg to differ. Keith plays a long solo with Jerry in it that just rips, and Keith stays hot all night, pushing the big man musically...to each his own though, this is a slower 76 show..

I am a huge fan of the Crazy Fingers...again keith brings the heat throughout/ 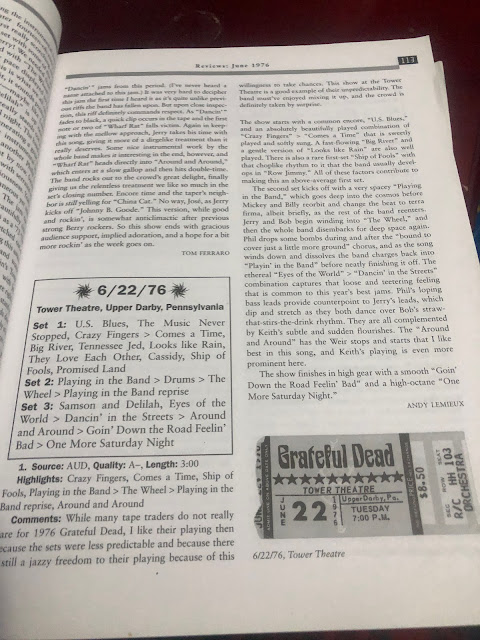 Tix for these Tower Theater shows were advertised through the Deadhead Mailer in one of the early direct-to-heads experiments.You might save this show for after 6/9, 6/14, 6/29; though you can't go wrong on this tour: dig in anywhere and you'll find a set with a few aces (in fact this show is something of a hidden gem). It has an unusual start to the First Set and is also known for having a Happiness Jam in Playing, but the real sequence is later on. It would be nice to see an official release of the rest of the Second Set (if not the whole show). It's the best show between the Beacon Theater run and the final show in Chicago. There was no encore.

First Set. U.S. Blues was a focus due to the Bicentennial/Philadelphia. If you're not old enough to know what was going on in Philly in '76 (or what the whole nation was like that June), there isn't room here. But they come out strong. They were playing Music Never Stopped every night so this is aced as it should be - if not as big as 6/14 or 6/29. The sound is more dialed-in for Crazy Fingers than on the 1st night. It's not 6/8 but it has merits. The next several are average '76 - save for Tennessee Jed, which is lifeless and torpid ('76 wasn't the year for Jeds). Keith is great on They Love Each Other. It's not 10/9, but it's good. However Cassidy is just great; better even than 6/18. Ship of Fools is a bit flubbed. The second verse is goofed and then the third is deftly switched with half of the second.

Second Set. Playing in the Band (others look for rights) is mainly notable for having a Happiness is Drumming Jam (proto Fire on the Mountain). It's started by Phil @14min. It's very '72, but with a tinge of Allah/'75. There's an anomaly @14:23 on the official that's not on the SBDs. RIYL it loose. Phil stays out for Drums, and as for The Wheel, 6/29 is the ONE. Jer pulls back into Playing and though it doesn't really go anywhere, a 35min sammich is always entertaining. Samson is freaking muscular and the start of the show's peak sequence (which should've been the section on Download 4). There's a lengthy Beer Barrel here, but it's complete only on the Vernon AUD and not on the MTX or SBD. Eyes is supertempo - even for a '76 and even at the right pitch. Jer starts with an unreal jazzy jam then it's all wheels driving and spinning tops. The Vernon AUD captures the drummers better, IYL (and the audience is soaring). Jer really drops your jaw a few times (get a bandage), but on places you don't normally expect for Eyes, because he goes back and forth into rhythm figures a bunch. Dancin' is also speedy and Jer goes at some angles here too, trying the less conventional when he takes over (after 5 minutes of laying back). Around takes a powder until the end jam, though it's cool how Jer just bulldozes the seg into Goin' Down the Road. On the latter, the 2nd solo wipes the floor with my brain. One More Saturday leaves 'em satisfactorily satisfied.

SOURCES: The digitalrbb_miller_112218 is the best SBD overall - perfectly patched with a band-taped AUD; it IS a bit fast though, needing -1% pitch. Other AUDs are way too fast (you know who you are) but you need the Vernon for BB Polka. The mtx_seamons_112900 is better in places than the SBD. Playing>Drums>Wheel>Playing is on Download Series #4. 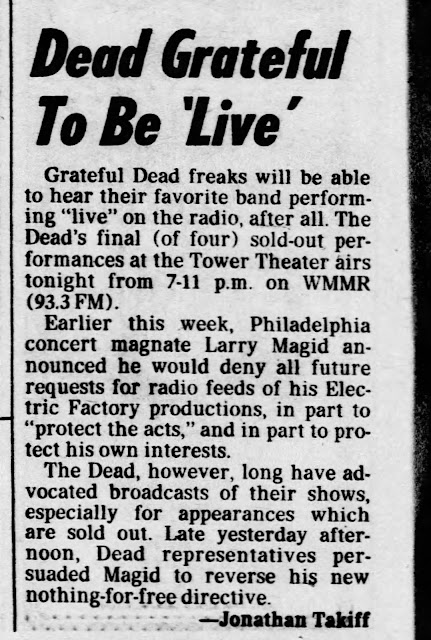