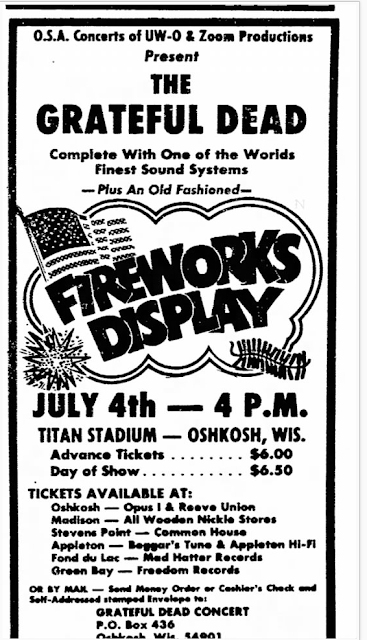 Red and white, blue suede shows. If you wanted to see the Grateful Dead on the 4th of July in 1974, you could try Oshkosh, Wisconsin with a nice fireworks display. Or you can get over to Columbus, Ohio and see Eric Clapton and Friends, the Grateful Dead and The Band.  Oops. Neither happened.

The great JGMF blogspot has some discussion on this in his great cancelled  http://jgmf.blogspot.com/p/canceled-grateful-d ead-and-jerry-garcia.html  But this is the first photos of the dueling ads.  The one on top appeared in
Neenah Menasha Northwestern
Oshkosh, Wisconsin
Thu, Jun 27, 1974 – Page 32 and the bottom one is fromvThe Indianapolis Star
Indianapolis, Indiana
Sun, Jun 9, 1974 – Page 180 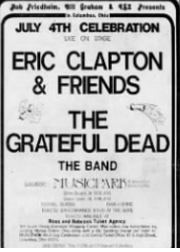 Email ThisBlogThis!Share to TwitterShare to FacebookShare to Pinterest
Labels: 1974, 1974-07-04, the wall