For song selection, 1976 is King. 1976 is all about taking fewer songs, all grate ones and rearrangement them every night in different and unique ways. 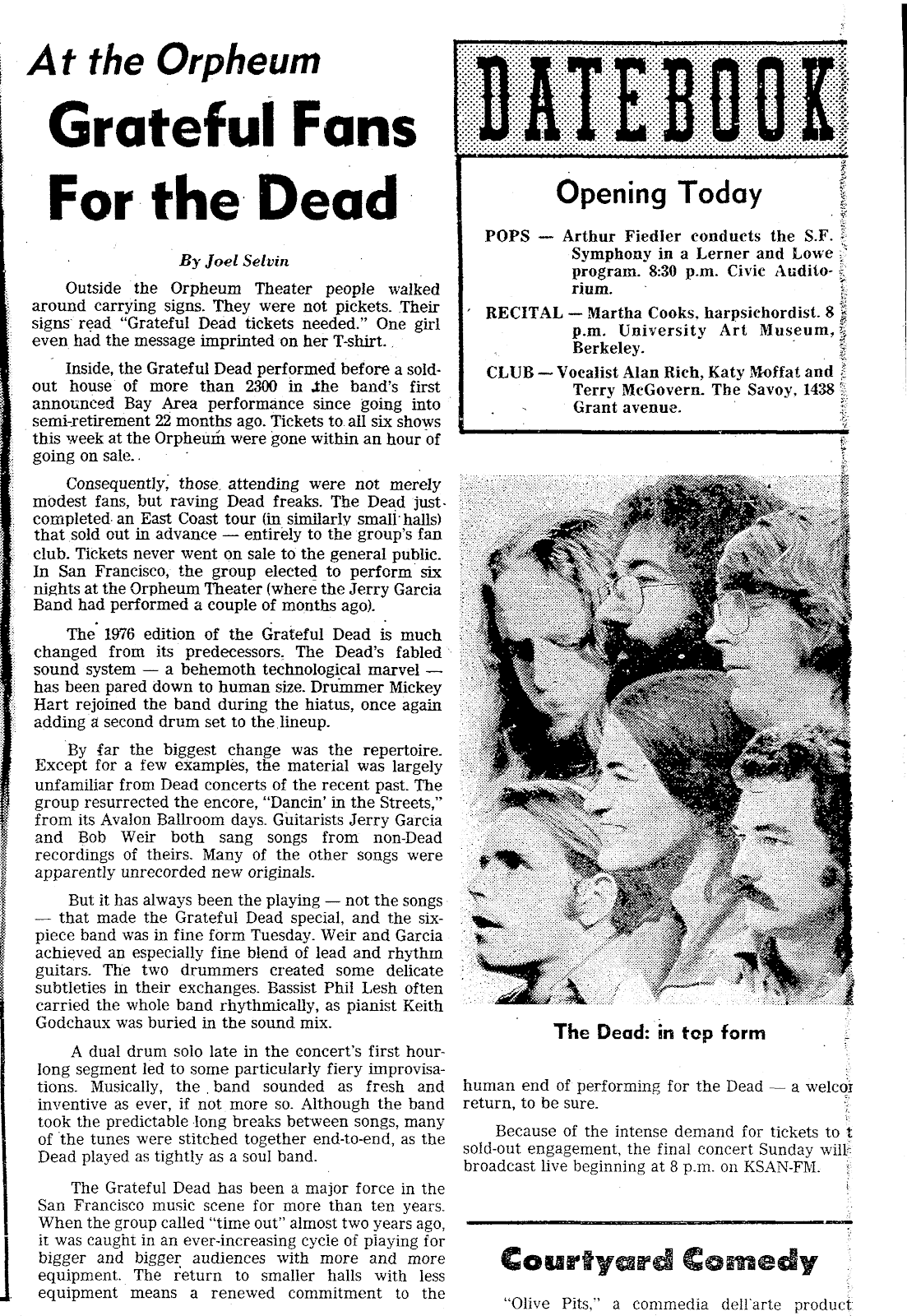 So let's talk Help Slip Franklins, St Stephens, Let It Grow, Cosmic Charlie, Comes A Time, Scarlet, Music Never Stop, Split Sugar and Sunshine, The Wheel, Dancin, Crazy Fingers, the Other One and play them in various ways, often in different sets, and encore slots and jam out them beyond where they will be jammed again in the future. Add High Time, Mission in the Rain and a Dew and yuou have it. Music opens show, Music closed set-one. Music closes set two
HSF opens show, HSF goes into M. Music closed show.  Comes a Time opens set two or played early in set one, play two Garcia slow tunes back to back (see 6-12 and 6-22 for example).  This is why I love 1976


Here's 76 Random Observations Why You Take a Serious Listen to Bicentennial Dead. 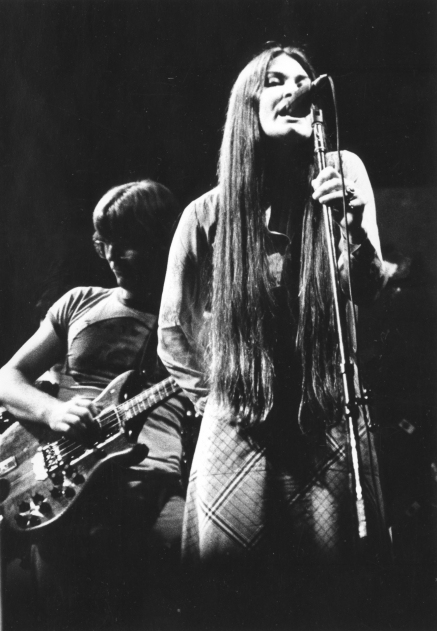 6. The four songs that opened the 6-22-76 at the Tower
US Blues, The Music Never Stopped, Crazy Fingers>Comes A Time,  whaaaaaaaaaaaaattttt

7. The Seven minute instrumental Jam between St Stephen and Eyes of the World before they start singing Eyes at 6-9-76

9. Those fine first set standalone Playing in the Bands

12.  The nice trader, who I can;t recall who sent me a pristine soundboard of 8-4-76 in trade for some bad audience I expect i sent him.

13.  Happiness is Drumming in Chicago and its short tease a few nights earlier in Philly
14. Mission in the Rain

17.  That First Set Wharf Rat that "appeared " according to Bobby in the middle of Dancin at Oakland in October 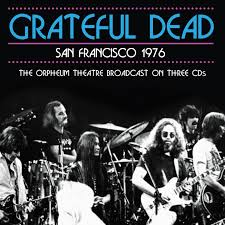 19. Colt Park and 14 Song First Set and 28 Minutes of Playing in the Band sandwiching some meaty stuff at my 3rd show (longest combined Playin of the Year) 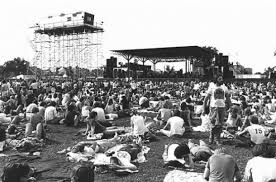 20. Only Might As Well four minute jam into Samson at Colt Park too


22. Only Franklin's Tower encore ever at my very first show


24. When Bobby grew a Beard and i saw it in Dead Relix a few months later


25. The fact that Dead Relix was still the source of so much Dead information

27. Having exactly zero girlfriends the entire year because I was obsessed so much with the Dead

28. That jam>Comes A Time>Jam>The Other one that night in SF when Donna took the night off

31 The Monday night return to Manhattan (last there 3-28-72) where they closed set-one with a 19 minute Playing in the Band and returned to open set two with The Wheel like they did the show two nights before in Boston.  The New York Times even reviewed this show like they did back in 1972.

32 6-23 in Philly (Upper Darby, I know) where Bobby told the Yellow Dog story prior to opening with The Music Never Stopped

33. night two in Portland 6-4. After closing set one with Help>Slipknot>Frankins, the band opens set two with a rare second set standalone Playing in the Band. They end the show with a unique medley of Cosmic Charlie>Let It Grow> Stella Blue>Dancin in the Streets>US Blues

34.  On Friday night 7-16 in SF at the Orpheum, the Dead flip the usual and end set one with The Music Never Stopped>Scarlet Begonias.

35. The band had started the year with early set Scarlet and Music, 3rd and 4th songs on 6-9 for example, but for most of the year they were more usually in the penultimate and final first-set song positions.

36. On Saturday, the first of the two Who/Grateful Dead day on the greens, 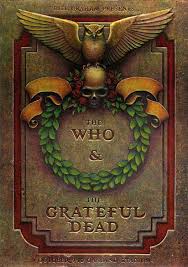 see http://gratefulseconds.blogspot.com/2015/10/complete-help-on-way-history.html for more on split Help on the Ways

38. Tiny venues to see the band


39. You have to listnen to know but my very first second set on 6-9-76 began St Stephen>Eyes of the World>Let It Grow.  I came back 79 more times but never got that again!


40. Indianapolis on October 1 gave us one of the rare Dancin splits.   Dancin>The Wheel>Ship of Fools>Dancin>GDTRFB>OMSN.   Ship of Fools always sounded better in an unusual spot like this.  The world gave us a great FLAC of this a few years back.


41.  The world has yet to give us a SBD of this on 10-15 at the Shrine (another tiny venue) but we did get a remarkable Eyes of the World>The Music Never Stopped

42.  The banter on the FM tapes where you can hear Mickey telling Bobby not to play Let It Grow for the 10th straight night.  You can also heard the band discussing the next 3 or 4 songs in the set.

43.  One of my favorite and early tapes 6-19 from Passiac with the classic Great American Music Hall opening of Help On the Way>Slipknot>Franklin's>Music to open the show

44. The Who and Dead combined set in October at Oakland (I wish). 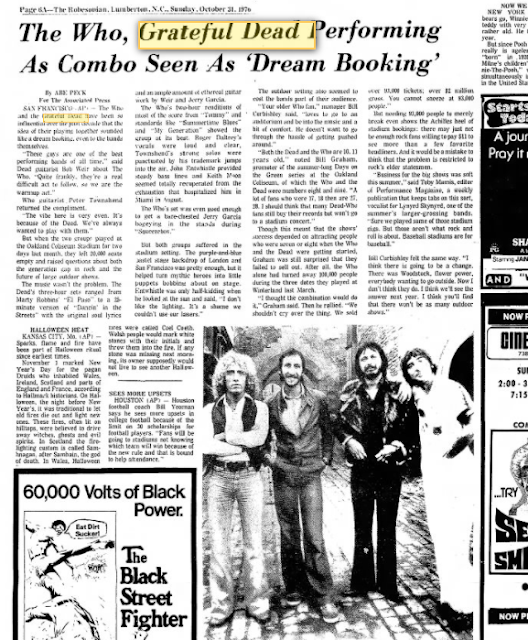 49.  The 36 minute first-set ending on Tuesday July 13 of Crazy Fingers>Let It Grow>Might As Well

51. Not satisfied with Tuesday's first set, the Dead top it with 37 minutes on Wednesday July 14 of Playin in the Band>Drums>The Wheel>a 14 minute Space Jam>Playin. Why was I still living on the East Coast? Was I stupid?

52. Wednesday July 14 set two highlight was Let It grow>Eyes>Wharf Rat>The Other One>Music
I recall listening to this show for the first time without knowing the songs and this one was hot.

53. Friday July 16 has another nearly  seamless set two of Playin>12 minutes of Stronger then Dirt>Cosmic Charlie>Samson>Spanish Jam>Playin>Around.  Not enough they then play High Time and Sugar Magnolia

54.  The next night on Saturday July 17, Donna is not around for set two so the boys start with Samson, take a breathe, and place Comes A Time>6 minute jam>tease the other one>drums>The Other One>10 minutes of space>Eyes>7 minute jam>The Other One>GDTRFB>OMSN.
Crazy night with early Comes, loys of space and jams surrounding The Other One with Eyes and Goin Down the Road mixed in.  Glad you put this one out Dave (and alot of the prior night).

55. Sunday July 18 was on the radio and thus got my earlier attention than some of the other shows, but the band did not let up on its 6th and final night with  Lazy Lightning>Supplication>Let It Grow>6 minute jam>Wharf Rat>4 minute jam>The Other One>St Stephen>NFA>St Stephen>The Wheel>The Other One>Stella Blue>Sugar Magnolia

56. While the Orpheum shows have a bit of repetition, who cares when they are splitting The Other One and opening with Comes A Time, and playing St Stephen every two or three shows.

58. At my second show on June 12, the Dead play the only Mission in Rain (of 6) I saw, it was beautiful. Later Let It Grow> Wharf Rat>Comes A Time.  That was also beautiful. Saw 78 more shows after that.

59. Rochester, a big Dead town (see almost any year), gets the first real split HSF with Help>Slipknot>Drums>The Other One>Wharf Rat>Slipknot>Franklin.s Tower on Sept 27

60. Syracuse the next night on a Tuesday sees the first set close with Let It Grow>Goin Down the Road followed by a seemless Playin sandwich in set two that includes The Wheel, Comes A Time, Eyes and Dancin among others.  This whole Fall tour was off the charts

61. Thursday Sept 30 in Columbus, Ohio State students get a 20 minute Crazy Fingers>It's All Over Now followed by a ten minute Scarlet to end set one.

63. Opening for four nights in a row in Chicago, on Saturday June 26, the second set is great with Playin>St Stephen>The Wheel>Playin and a Crazy Fingers>Stella Blue>Around>OMSN.

65. On the last night in Chicago, Playin surrounds The Wheel, before St Stephen>NFA>St Stephen.

67. I'm an old man now so I may have put the same moment twice. if so let me. I just have so many fond memories of my first year of going to Grateful Dead shows. And so much I missed.

68. Near the end of the year, the Dead that cool late set two Franklin's like that did at the Shrine on October 15.  This became a common LA trend, like fashion ever as they did this a few times more and rarely anywhere else.   He's Gone>Drums>The Other One>Comes A Time>Franklins>Sugar.
This show needs an upgrade because along with the Eyes>Music this was one of the best shows of the year.

71. I only knew Dead shows with Mickey, I was glad he was there

73. Bobby was so young and had so much energy

74. I couldn't believe how good Phil was at bass. He never saw all year.

76. The 1976 Jerry was the best. He was youthful. Ever song he sang was beautiful. His guitar playing was out of the world. He looked happy every show. And he played like no one. He was why we came the best. The band was always on every night back in 1976, but Jerry was the key. Miss you dude.