The Other Day They Waited, The Sky Was Dark and Faded at the Greek, June 16, 1985: Cryptical Returns After 791 Shows

After the frenzy of sitting in the hills on Friday http://gratefulseconds.blogspot.com/2015/11/does-this-count-as-attending-sitting.html , I secured tickets for Saturday and Sunday at the Greek, I believe from Cormac. My brother Ralph said, hey I think Cormac might have an extra. Thanks Oregon Man.
Here's the whole show  Starts with In the Midnight Hour>Bertha and surprises the hell out of all of us with That's It for the Other One in set two.  I was standing near front right pretty close to the stage when this occured on this beautiful hot Sunday.  This was a very big deal to me.

Cryptical had left the Grateful Dead planet after Felt Forum and Hill Auditorium Ann Arbor in December 1971, and one 1972 appearance in Waterbury September 1972, so this was another of those great moments I was able to experience in person at my shows with the Dead bringing back a vintage after a many years absence.  This night saw the longest period before the return, almost 150 months. 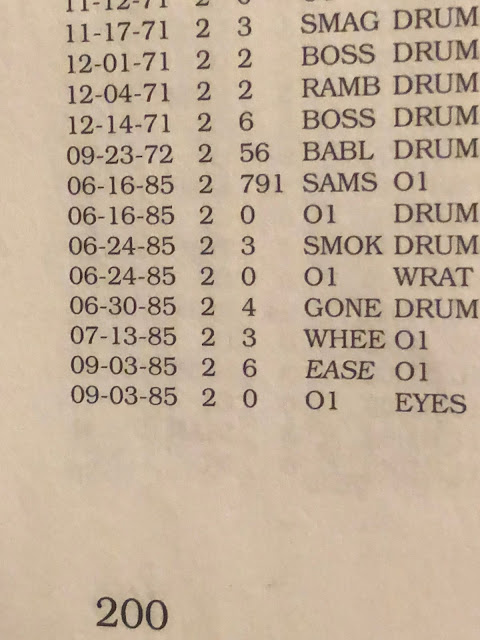 There is a wealth of information on this weekend in Berkeley, and this show too.  I recommend listening to the That's It for The Other One by clicking the link above while reviewing the literature.  It's fun and was totally unexpected, and only repeated four more times over the next month or so.
According to Deadbase the last time, the  Grateful Dead performed That's It for The Other one complete, without drums in the middle was at the Fillmore West on March 1, 1969 (Cryptical>The Other One>Cryptical). You might remember that show.  Here's some insight from experts better than me"

Article Text:
It would have been amazing enough to have such a deranged, disorganized, disparate group stay together one year, let alone 20, but that is exactly what the Grateful Dead has done.
At three sold-out concerts this weekend at UC-Berkeley's Greek Theater - for a total audience upwards of 27,000 - the beloved San Francisco rock institution marked two decades of playing, although what this landmark event means is anybody's guess.
So much interest was stirred up, in fact, by this signal anniversary that all six band members went so far as to participate in an uncharacteristic press conference, where, predictably, nothing was revealed.
``It's no big deal,'' said guitarist Bob Weir. ``We're not sure when the date was anyway. It doesn't matter to anyone.''
``It's a matter of indifference,'' echoed guitarist Jerry Garcia.
Not entirely. The band performed all weekend in front of a giant backdrop painted by one of the great early San Francisco poster artists, Rick Griffin, depicting a skeleton dressed as a Revolutionary War Minuteman above the legend ``Twenty Years So Far.''
The shows opened Friday with a blast through the public address system from the beginning of the Beatles' ``Sergeant Pepper'' album: ``It was 20 years ago today . . .''
Earlier that afternoon, as many as a couple of thousand Deadheads milled around the grass outside the Greek Theater waiting to get in, throwing Frisbees and trading stories. Hippie-types in tie-dye lined the streets blocks around the site, holding signs reading ``I Need a Ticket'' or ``Just One Please.''
Some sported signs, bumper strips or T-shirts with a slogan referring to the ballooning girth of Dead kingpin and lead guitarist Jerry Garcia: ``I Want to See the Fat Man Rock.''
One enterprising soul yesterday carried a placard saying he would swap a bottle of '74 Robert Mondavi Cabernet for a pair of tickets. It was a testament to the incongruous upscale nature of certain members of the supposedly peasant set who have been attending Dead concerts over the years.
Dead concerts are more like carnivals than rock shows. Many people attended each show of the series -the Dead remains one of the few rock bands to improvise a new repertoire show by show. Craftsmen hawked jewelry and bootleg T-shirts outside, begging tickets while they made change.
An entire section of prime seats was reserved for the tapers, who sprouted a forest of 7- to 10-foot-tall microphone stands. Most rock groups frown on tape recorders at concerts, wary of potential copyright violations and lost royalties. Not the Dead.
``We can't stop them anyway,'' said drummer Mickey Hart. ``They just trade the tapes around. They don't make money from them.''
Not only have the Dead merely survived as a mostly intact unit for 20 years (five of the six musicians belonged to the original group) but the Dead, more than any other contemporaries that have managed to continue to struggle along, have remained the most true to the band's original vision.
Listening to the Dead open yesterday afternoon's show with ``In the Midnight Hour,'' the Wilson Pickett classic the band has performed for most of those 20 years, it was impossible not to notice how little the music has changed - Garcia's fluid, crystalline guitar weaving through the imaginative, fleet-fingered bass parts of Phil Lesh, with drummers Bill Kreutzman and Hart joining in intuitive polyrhythms at the bottom of the sound.
The band defies show business conventions. The Dead has yet to score a hit record. In fact, the band hasn't released new material in more than four years. A new album has been in the works for at least two years, with little progress reported.
Nevertheless, interest in the Dead never has seemed higher. Not only do their concerts sell out within hours of going on sale, the shows are not even advertised, only announced over a Dead hotline with an unlisted number.
The 20th anniversary has landed the band on the NBC Nightly News and the Today show and the group recently recorded the theme song to the revived ``Twilight Zone'' that debuts on network TV this fall.
Despite the hoopla surrounding the anniversary ``non-event'' - which the Dead slyly promote and reject simultaneously - nobody really can figure out what the longevity benchmark means, other than that the Dead itself is older than some of its fans.
Truly, few rock concert crowds span the range of ages to be found in the Dead's audience. Gray-bearded grandfathers mingle with little kids (T-shirts were even being sold in children's sizes this weekend), with a single unifying thread - the common cast of '60s counterculture.
Last among those able to attach significance to the occasion were the members of the Dead themselves. At the press conference, they weren't even sure what exact moment in the band's evolution the anniversary marked.
The date selected to represent the group's 20th anniversary corresponded, explained Dead press agent Dennis McNally, with the date in history when bassist Phil Lesh moved to Palo Alto to join the nascent rock band.
``I showed him how to tune the bass and where to place his fingers for the scales,'' said Garcia, ``and two weeks later he played the first gig.''
Lesh paid tribute the band's growth over the years. ``It's not age, it's experience,'' he said. ``It's that thing that only time can give you - mayonnaise.''
A TV reporter wanted to know what role drugs played in appreciating the Dead's music. ``To some,'' he solemnly intoned, ``The Grateful Dead and psychedelics are synonymous . . .''
``Do you mean, Does the mind play a role?'' asked Garcia.
``No, the drugs,'' the TV man replied.
``His lips are moving, but nothing's coming out,'' said Weir, as the band dissolved in chuckles.
Garcia praised their audience, the fervent Deadheads.
``They're no slouches,'' he said. ``They're paying attention. It's like they're willing us to make it good.''
The press conference ended with the band being asked what they have learned in 20 years.
``Never take your eyes off the guy to your right,'' said drummer Mickey Hart, ``or the guy to your left.'' 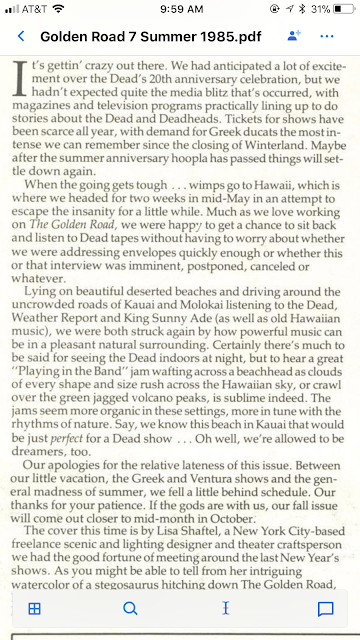 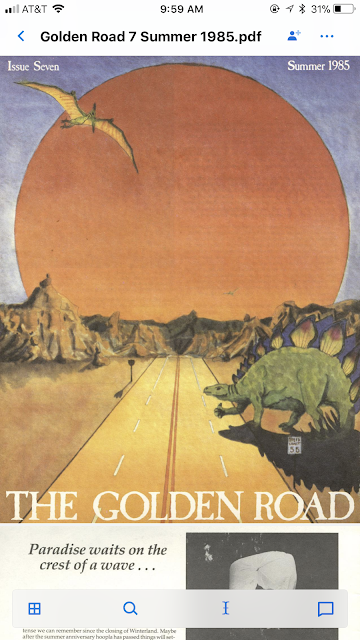 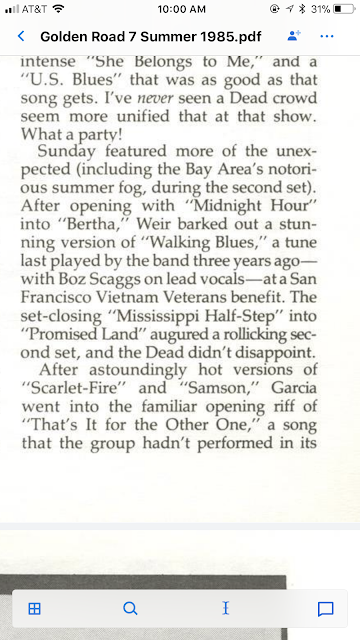 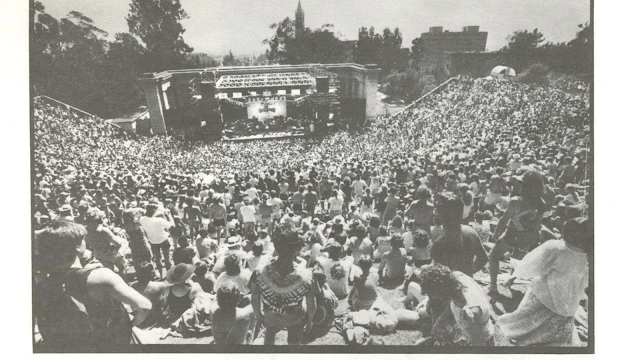 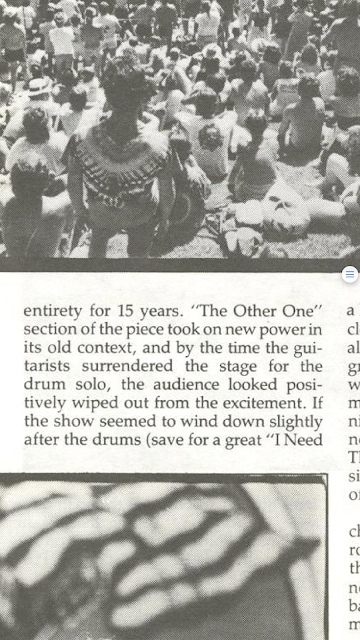 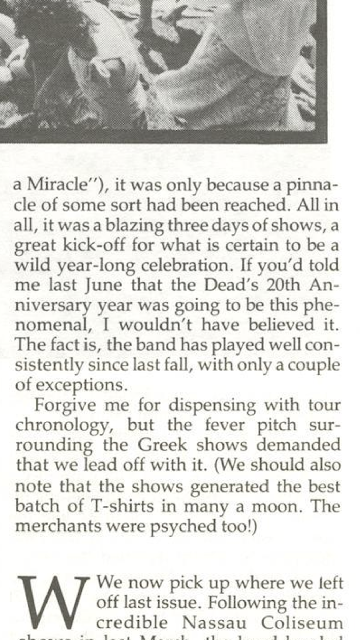 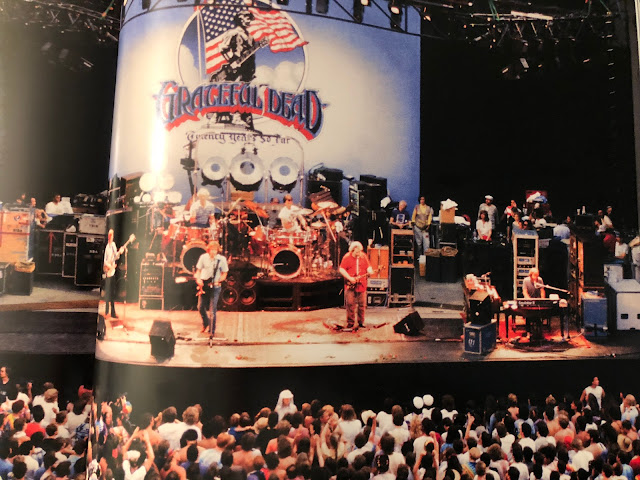 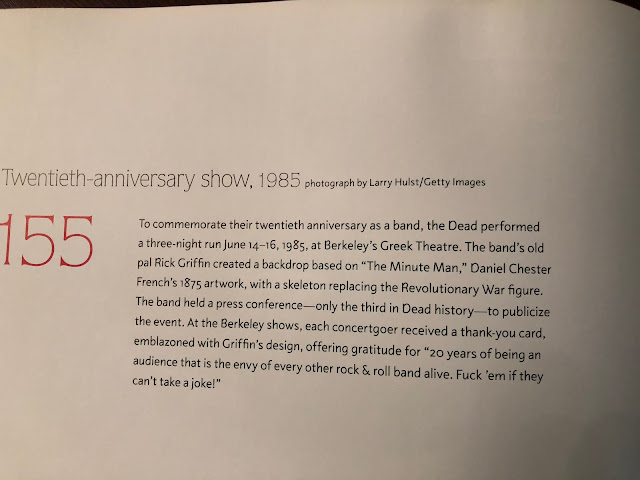 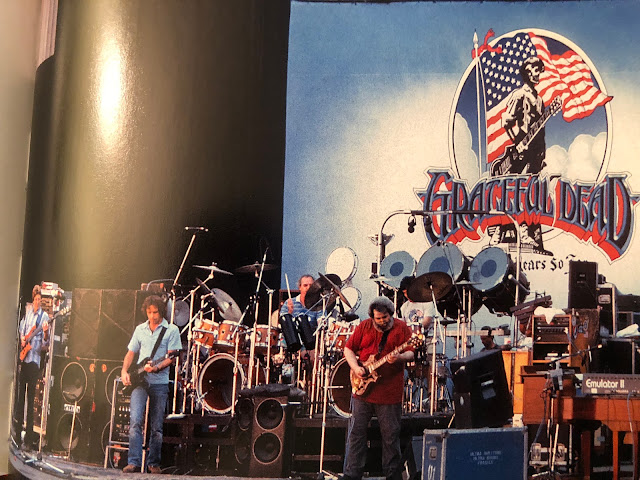 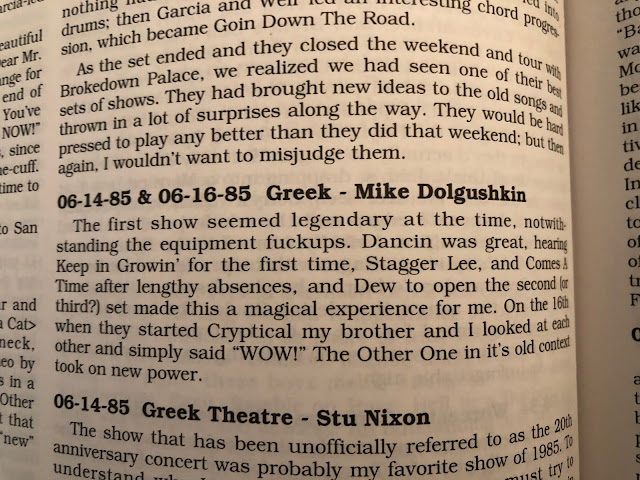 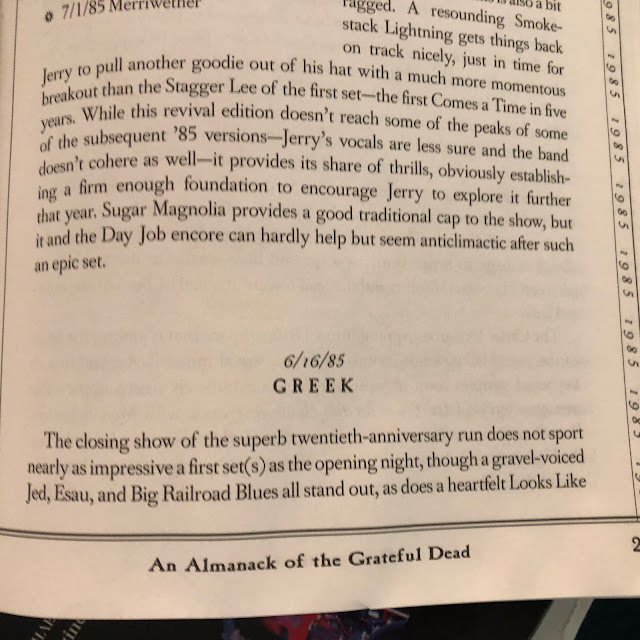 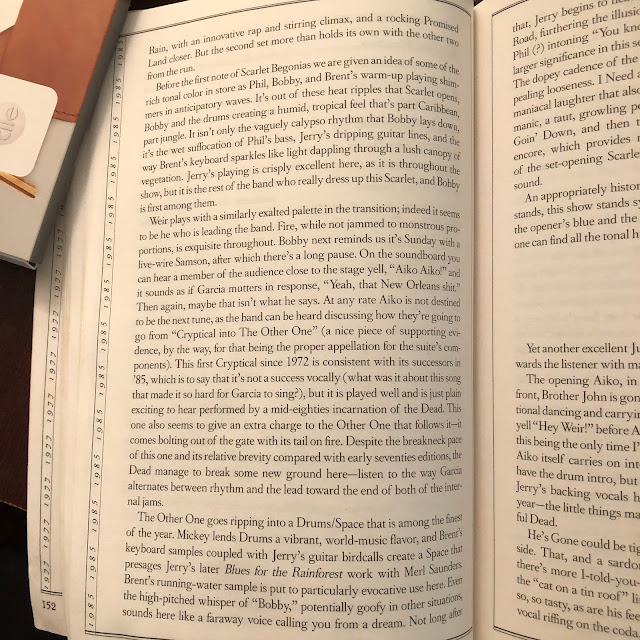 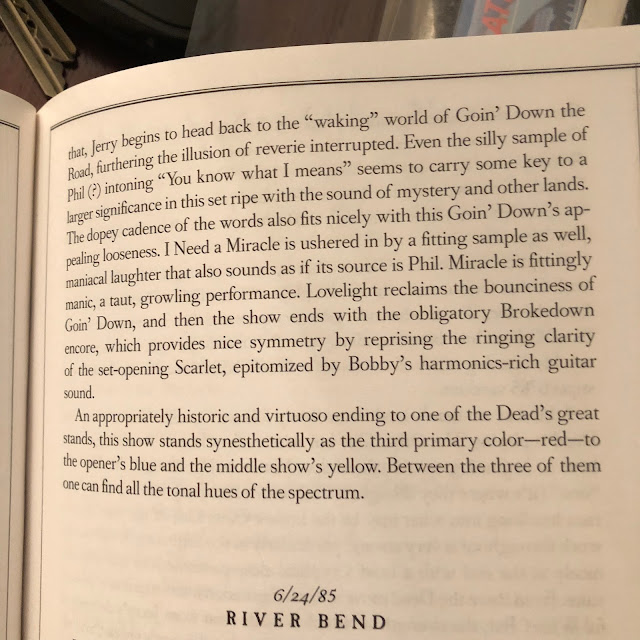 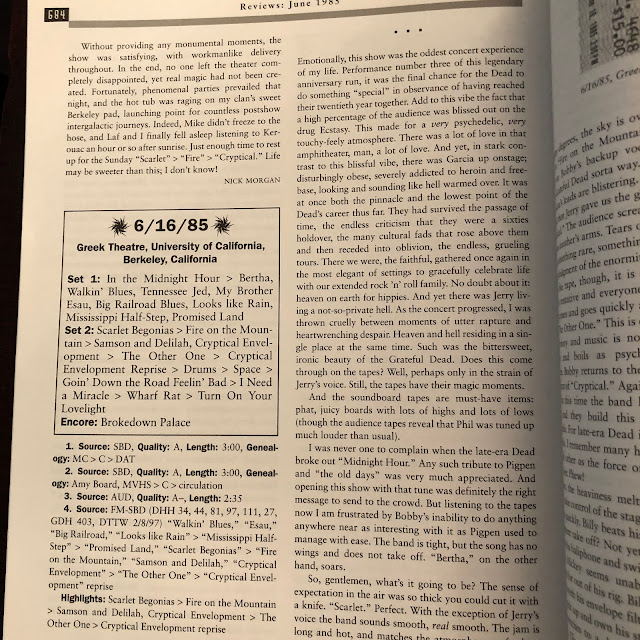 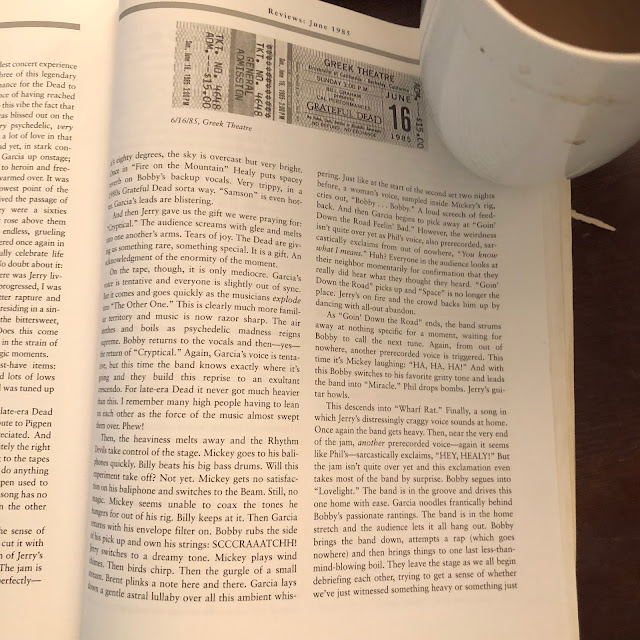 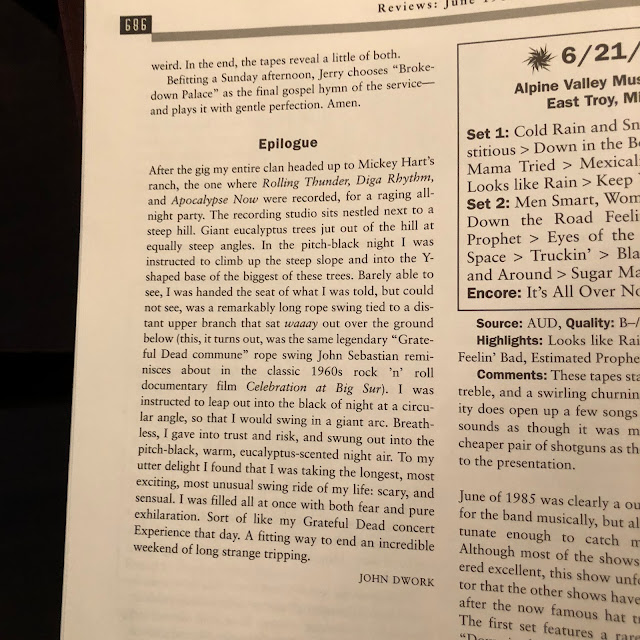 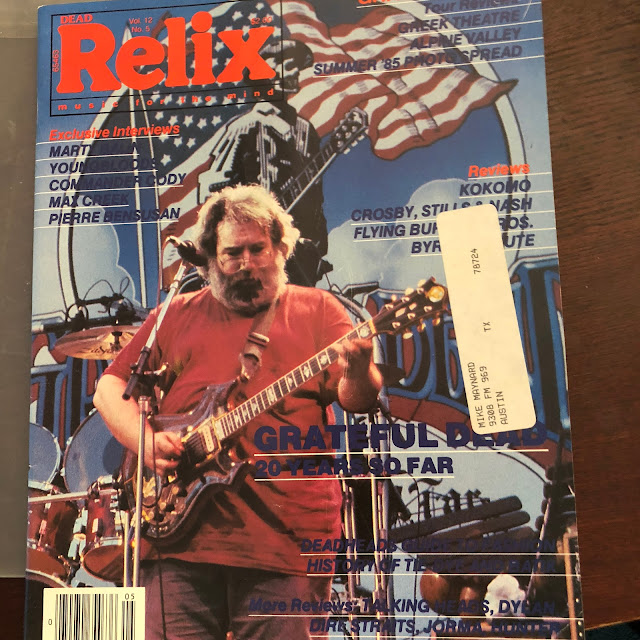 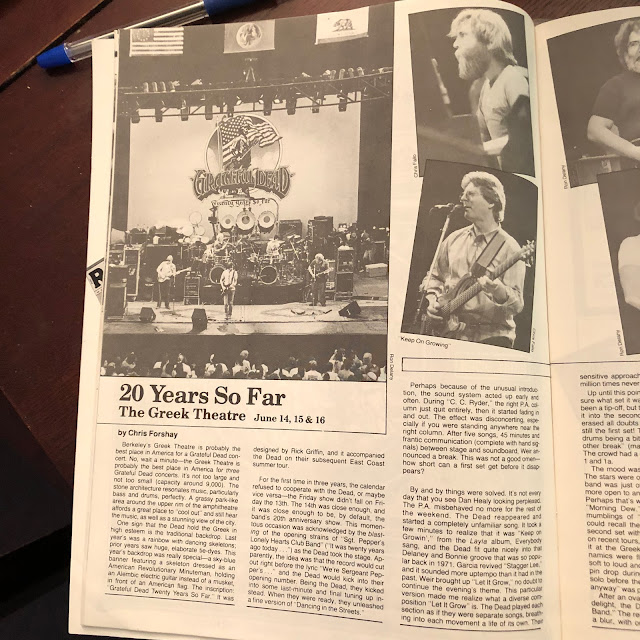 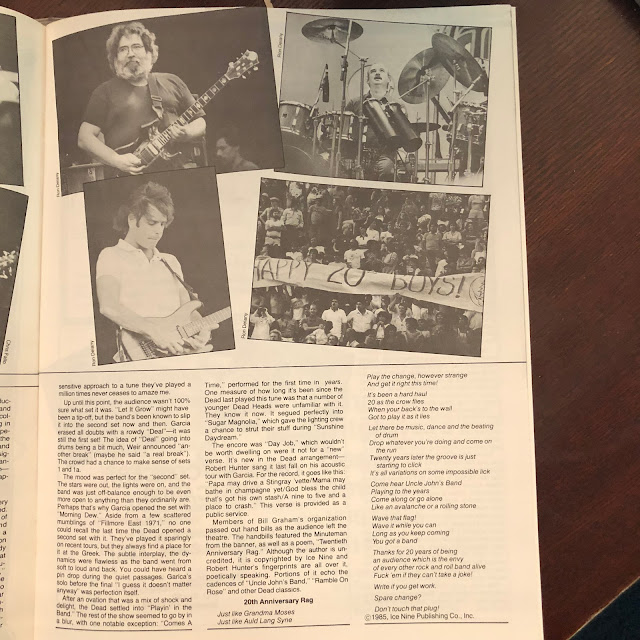 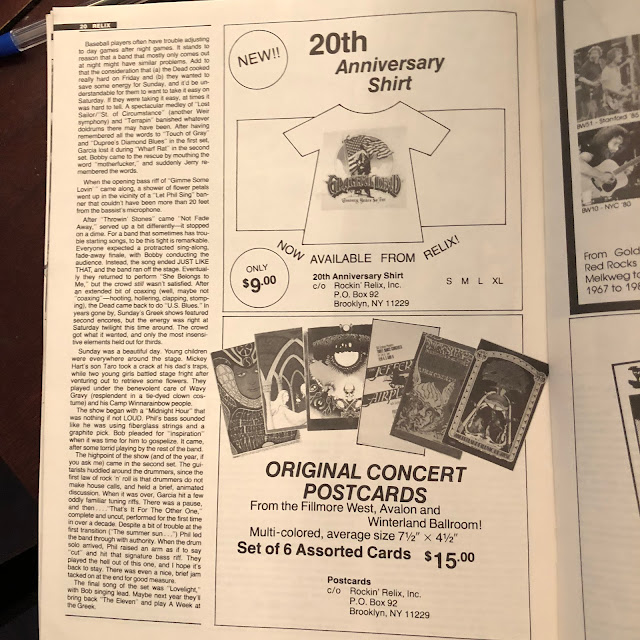 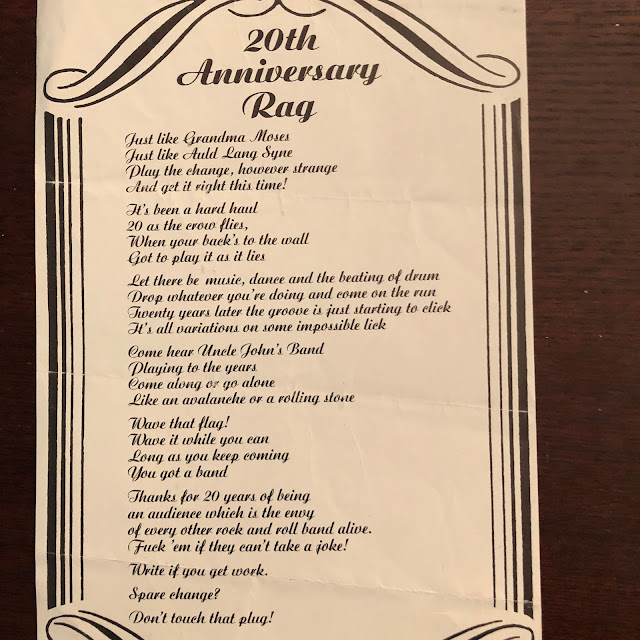