37 Years Ago Tonight, I went to my shortest Grateful Dead show. It lasted 73 seconds, which you are hearing now. We listen to the FM broadcast of the prior night from Passiac as we drove down from Maine towards New Haven, and Jerry's voice did not sound good, especially in the second set. They made up this show on January 17, 1979, my last night as a teenager. Enjoy

Despite no show, police only arrested 16 people after arresting 19 before the cancellation. The show was rescheduled for http://gratefulseconds.blogspot.com/2017/11/this-deadhead-ends-his-teenage-years.html 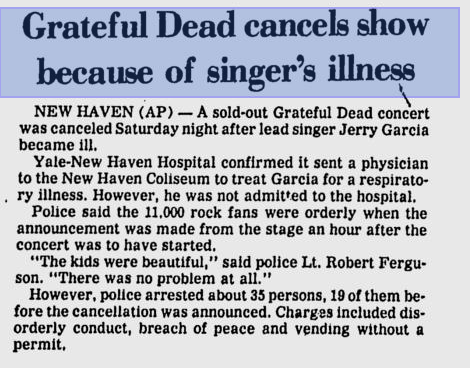 Tripped hard in GFOX for an hour or so until we were gently "swept out" by the janitor.