Right after I moved to Berkeley in December, 1980, and saw 5 Dead shows in Oakland, I walked from 2816 Fulton Street over to my first Jerry Garcia Band Show at the Keystone Berkeley. It was January 31, 1981. It was the first song of the second set when I first heard Jerry cover Allen Toussaint live. You are hearing it now in the background. RIP Allen.here's the Full Show

This was also Melvin Seals first month with JGB although I saw him around 1975-76 in Vermont playing Stealin' Watermelons and Fool Around and Feel with Live with Elvis Bishop and Mickey Thomas.

As a added treat, I am including the Jerry Covers New Orleans collection. Check out "Get Out Of My Life Woman" from 10-4-86.  NOLA Jerry 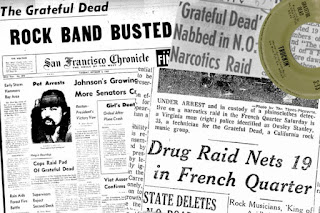