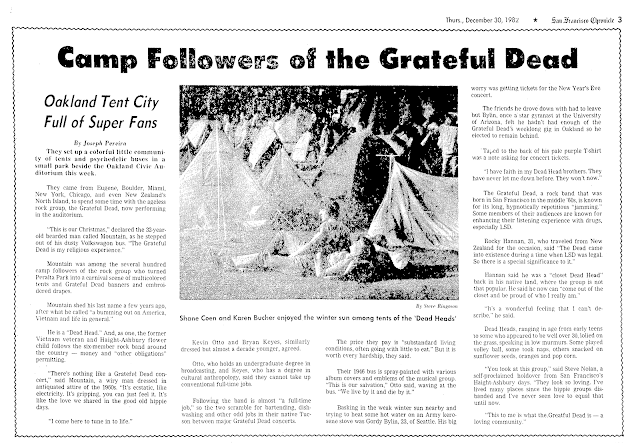 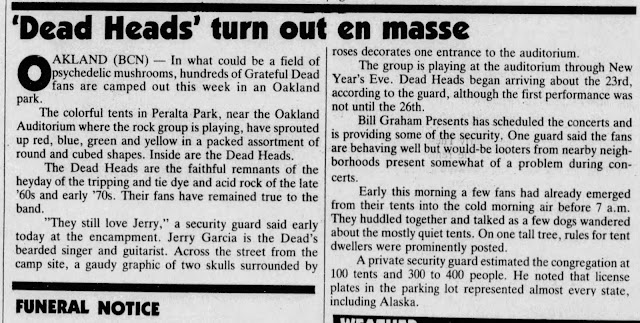 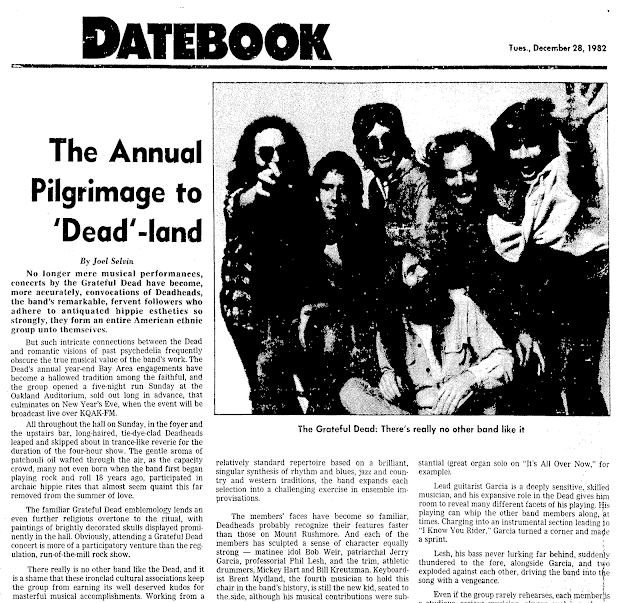 1982 was my third New Year's Eve set of shows and we were waiting for the surprise. 1980 had the surprise acoustic set. 1981 had the Joan Baez acoustic set and my only Dark Star. And in 1982, we had Etta and the return of the Pigpen tunes. On December 30, we got Etta's theme Tell Mama and the first Hard to Handle since August 26, 1971!

On New Year's Eve, we got Matt Kelly on CC Rider on the second song of the show, the regular holiday visit of John Cipolina on the unusual second set closing of Not Fade Away>Deal>Sunshine Daydream (after Sugar>Sugaree opened the set earlier), and then we got a five song 35 minute third set (which remarkably is on YouTube per the link below) which featured:

1. Turn On Your Lovelight (last played at an official show show in the US at the Academy of Music in March 1972 (and then played three times during Europe 72 tour, at the surprise Amsterdam in 1981, and once at a Moscone Center show earlier in 1982  ok coldrain108, it was broken out at the moscone )

2. Tell Mama  (which debuted the night before)

This was a treat. And fun. And historic, And never repeated.  Etta James with the Grateful Dead 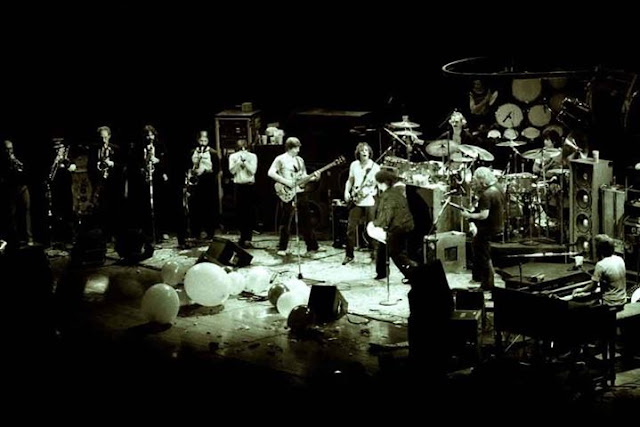 The Grateful Dead System At The Oakland Auditorium, December 1982
According to Howard Danchik of Ultra Sound, ‘‘The Dead’s system, as always, was run in stereo. The main speakers were flown, and comprised 12 MSL3s at each side of stage, plus a center cluster of eight (four lelt and four right channel), also above band.
“Suspended from the side clusters are three Meyer Sound Labs UPA cabinets, angled downward to fill in for those at the front of the audience. There are also four UPAs below the lip of the stage at the center (two left and two right) for the spectators at the very front-center, plus one UPA at the rear of each main cluster, pointed up and back for spectators in the balcony directly to the sides of the stage.
“Each MSL3 is driven by 650 watts RMS of amplification—225 to each 12-inch speaker (two per cabinet), and 200 to the four piezo tweeters. One MSL processor is used to drive all the MSL3s on each side; two (one per channel) to drive the center cluster; and two (one per channel) for the front and sidefill UP1As. 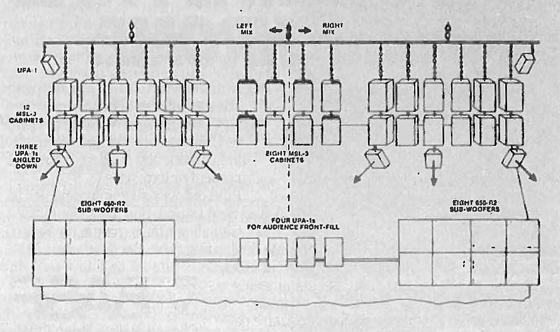 Diagram of the system in Oakland, 1982.
“The subwoofers were made up from eight MSL 652-R2 subwoofer road cabinets (two 18-inch drivers, front-mounted) on each side, stacked on their sides, four wide and two high. Each speaker is driven by 225 watts of Crest amplification. The processor takes a full bandwidth signal from the house mix, and extracts 80Hz and below for the subwoofers.
“Additional speaker systems included: for the lobby four UPAs (stereo, via Meyer processors); for the bars one UPA in each bar (mono, one processor each); the kitchen one UPA (mono, one processor); and the kids’ room a pair of Hard Truckers five inch cubes (mono, no processor).
“All power was provided by Crest amps, 225 W RMS per channel into 8 ohms. House mixer was a Jim Gamble custom board, 40-in/8 stereo submasters, wtth automatic built-in mono output The monitor mixer was a Gamble custom 40/16 console. House effects included a Lexicon 22/lX digital reverb and Super Prime Time; dbx Boom Box subharmonic synthesizer; a collection of vocal gates; and an autopanner, homemade by Dan Healy & company. Microphones included Shure SM78s for vocals, plus a new Neumann mike for Jerry Garcia, and Sennheiser 42ls, AKG C451s and C414s.’’
Editor’s Note: This is a series of articles from Recording Engineer/Producer (RE/P) magazine, which began publishing in 1970 under the direction of Publisher/Editor Martin Gallay. After a great run, RE/P ceased publishing in the early 1990s, yet its content is still much revered in the professional audio community. RE/P also published the first issues of Live Sound International magazine as a quarterly supplement, beginning in the late 1980s, and LSI has grown to a monthly publication that continues to thrive to this day.
Our sincere thanks to Mark Gander of JBL Professional for his considerable support on this archive project.