LSD Millionaire: 50 Years Since The Dead Took the Northwest By Storm, January 1968


There are going to be some amazing 50th anniversaries coming up in 2018, as the 1968 version of the Grateful Dead start rocking into town.  Owsley gets busted along with some very close friends (why is drug free Pigpen sitting with him on the time-out bench?).  I have found new evidence below that Hunter was starting to think of Ramble On Rose too. 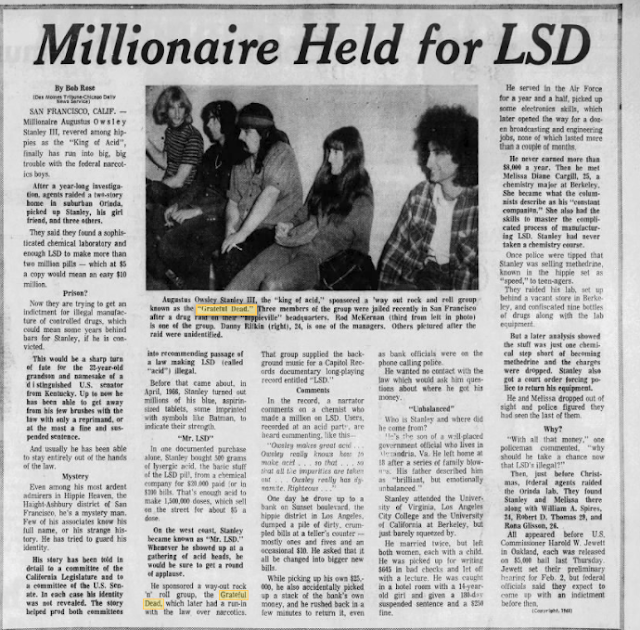 Despite this setback, in a few weeks, the Dead would run up north to Euerka, Portland, Seattle, Eugene and Ashland, some places twice, and some fates unknown. You can read some of the Dead scholars takes below, make sure to read the comments too.  There is a little bonus in the links today too.

We don't even know the exact setlists of the Seattle show which may have been January 23 as Road Trips says or January 26-27.  Don't worry the Dead would be back in Seattle in a just a few months.
I asked Corry, but the dates for the Seattle show I believe are incorrect. JGMF says so too.
This may be the only time in official releases the Dead don't even know what day it is.  I have little in the way of reviews but lots of local color.

50 Years Since The Dead Took the Northwest By Storm

For real info from these dates:
http://jgmf.blogspot.com/2010/05/gd-at-eagles-auditorium-seattle-wa.html 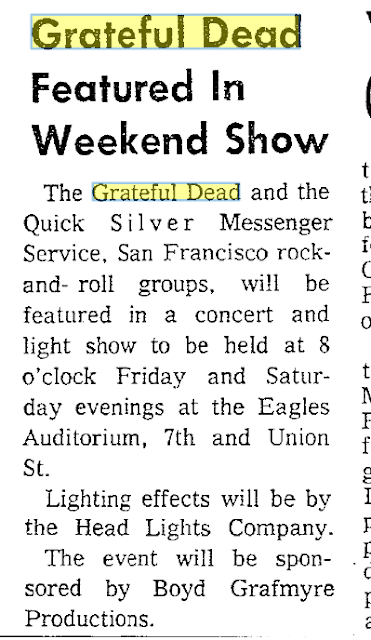 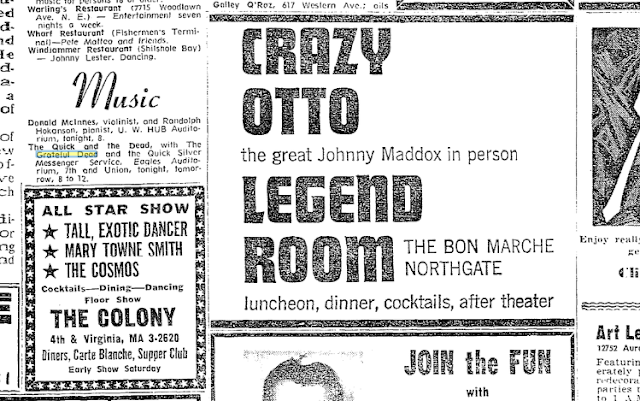 From deadlists
Band Grateful Dead
Venue Eagles Auditorium
Location Seattle, WA
Date 1/26/68 - Friday posters tickets, passes & laminates
Comments Joe Jupille researched the University of Washington Daily and the Seattle Post-Intelligencer newspapers and only found an ad for QMS and the Dead on 1/26 and 1/27 in the Friday 1/26/68 edition of the Seattle Post-Intelligencer (the weekend entertainment insert, p. 6). He turned up no mention of other Quick and the Dead shows at Eagles Auditorium. Paul Gibian also researched the 1968 Eagles Auditorium shows and came across an announcement in the Friday 1/26/68 edition of the Seattle Post-Intelligencer. It's contained in the arts section column titled "Off Beat" and reads: "Quick and the Dead - the Grateful Dead and the Quick Silver Messenger Service with Head Lights Co from San Francisco will be playing the Eagles' Auditorium, 7th and Union Street, tonight and tomorrow, 8 p.m.-midnight, with an exciting road show they are calling Quick and the Dead. No age restrictions. A Boyd Grafmyre Productions presentation. Tickets: $4, at Warehouse of Music, Discount Records, Campus Music and in Bellevue at Bell, Book and Candle." DeadBase XI lists: New Potato Caboose > Born Cross-Eyed, Caution (Do Not Stop on tracks)
Recordings None in circulation as of 2/02.
Download Sources
Contributors David Sorochty , "The Art Of Rock" book p249, p287 (two different posters), Adrian M. Johnson , Paul Gibian , Joe Jupille, DeadBase XI, Brian Pollard
Caretaker 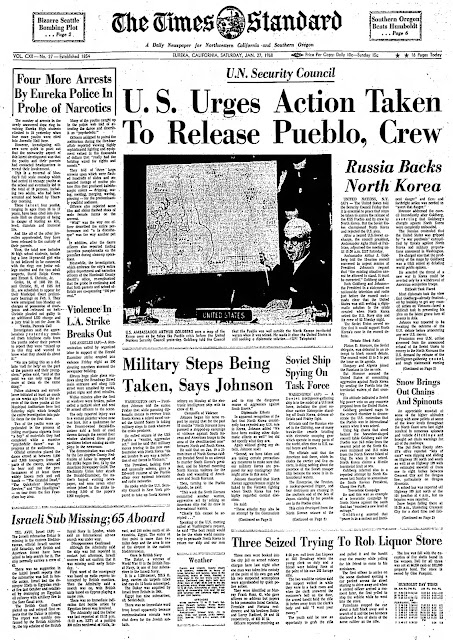 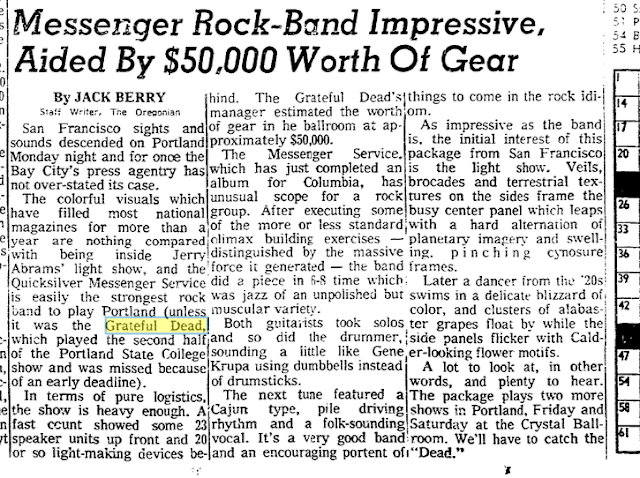 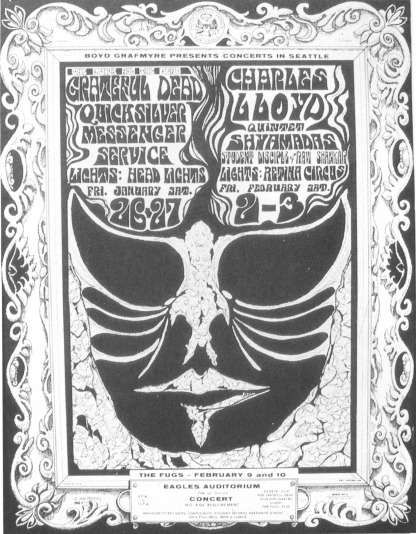 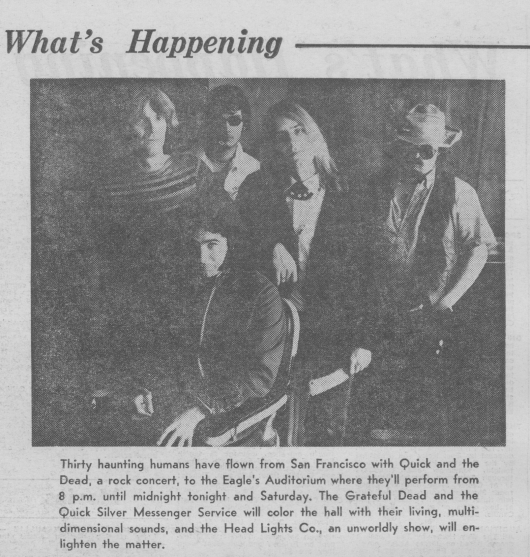 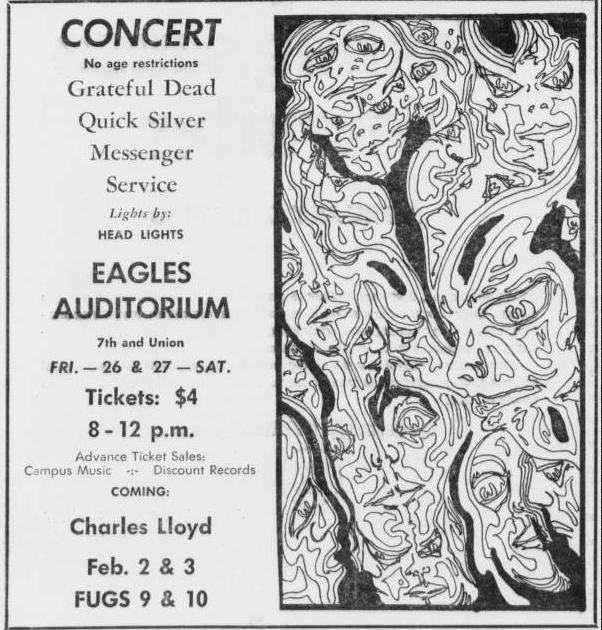 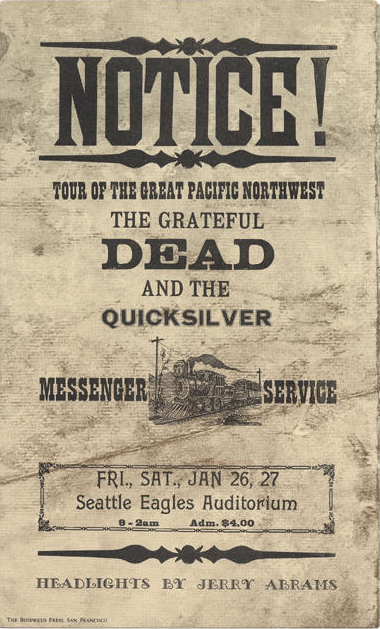