Return of Big Boss Man, A Day At The Dentist and An Eleven Jam Highlight The Most Underrated Show of 1981: December 26, 1981

"You won't let Jerry stop". This post is less about the history in the papers and more about the music.

I told you New Year's shows were special. Of Course, this show has the return of Big Boss Man, sung by Jerry with the last version from the last night of the Europe '72 tour May 25, 1972 (during the longest first set ever) by Pig. But that my friends is the very tip of the iceberg of this beauty.

Only A Day at the Dentist

I told you New Year's shows were special

1981 was an exceptional fine year for shows from Meg Welk to Oaklands
With 3 votes, this show ties for 34th place as best show of 1981, which shows you
(a) people don't know or can't remember or
(b) people are lucky there is another fantastic show to learn about or re-remember.

An every song was played well.


Of course there is a gfreat Charlie Miller of this apparently recorded by Joani Walker. 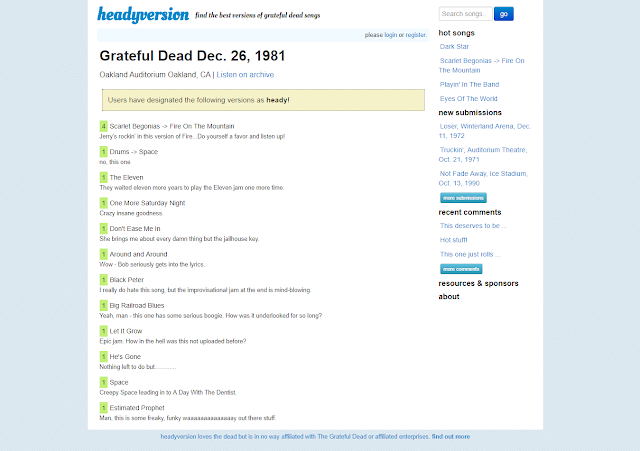 I knew Joani a little in Berkeley in 1981 through my friend Rick Sullivan. I remember going to a party with a bunch of Dead Heads with really really long hair like Randy and many others.  Deadheads with really really long bhair tended to be the true real deal dead fans and/or from Santa Cruz (right Katie?). We had our own Day at the Dentist that day, and I wound up with my eyes crossed and laying on the floor.

When looking for a dentist, you have to understand that no one is best. Your personal needs in addition to circumstances make the right dentist for you diverse from a number of other peoples. A person will have to discover a good balance between everything that has been discussed. You probably cannot afford the most costly dentist out there, yet you also probably may need the most expensive dentist. Zahnarzt Bern

Distributor Vinyllantai said...
This comment has been removed by a blog administrator.
May 19, 2020 at 1:18 AM

Pretty good post. I just stumbled upon your blog and wanted to say that I have really enjoyed reading your blog posts. Any way I'll be subscribing to your feed and I hope you post again soon. Big thanks for the useful info. Dentist Ridgewood NY

I would like to say that this blog really convinced me to do it! Thanks, very good post. edmonton emergency dentist