Happy 40th Winterland
For their last big trick in the 1977 concert season, the Grateful Dead certainly pulled another rabbit out of its hat on December 29, 1977, forty years ago today.Double Dutch China in the Middle of a Playing In the Band Sandwich. For Charlie Miller's 14-pack go here

This was a first ten Dick's Picks, of course, Ten exactly. The allmusic.com review
Deadheads will treasure the 53-and-a-half-minute medley in the second set (and on the second CD) of "Playing in the Band/China Cat Sunflower/I Know You Rider/China Doll/Playing Jam/Drums/Not Fade Away/Playing in the Band," especially because it marks the first performance of the 1969 song "China Cat Sunflower" in over three years (that's why you hear all that applause when they start to play it).

My pal Tom from Carmel saw this show, as he was already a West Coast Winterland deadhead in 1977, whilw I was still an 18 year on the East Coast celebrating my New Year's in Upstate NY at Colgate, Rochester and Broome Ciunty on Nov 4-6.

Photographer exterordinare Bob Minkin wrote this a few years back at http://newfillmore.com/2015/01/01/the-grateful-dead-at-winterland-1977/'
I buy every one of his books, you should too.


FLASHBACK | BOB MINKIN
After my summer trip to San Francisco in August ’77, I was itching to get back to the Bay Area. The Grateful Dead provided the perfect excuse — their fabled year-end concerts at Winterland. As a young Deadhead who never got to see shows at the Fillmore, Fillmore West or Avalon Ballroom, Winterland represented the last of San Francisco’s legendary venues.
Armed with my new camera — a Minolta SRT-101 with a 50mm f1.8 lens — and a load of film, I left New York City on Christmas day, taking Amtrak to Chicago and switching to a Greyhound bus that took me to San Francisco.
After arriving late at night, I lost my wallet in the San Francisco Greyhound bus terminal. My wallet contained all of my money, plus a pair of tickets to each of the three sold-out shows. I freaked out! What was I going to do now?
A hippie I met on the bus let me stay at his place that night, and the next morning, December 29th, he drove me to the corner of Post and Steiner Streets, home of Winterland.
It was a rainy, dreary morning and here I was standing outside the venue with no tickets and no money. Not only did I lose my own tickets but my friend Joel’s as well. Fortunately I still had an ounce of Thai sticks that I had carried cross-country, and selling a few sticks gained me some cash.
When Joel arrived, I gave him the bad news about our predicament, and he wasn’t very happy about it, to say the least. We decided to take a cab to Winterland Productions’ offices downtown, since that was where the tickets had been mailed from. I remembered the name of the woman who had originally helped me get them — Gloria Pulido — and asked for her when we got to the offices. She helped out again by selling Joel and me new sets of tickets to the three sold-out shows.
The year 1977 was a great one for the band, and they closed it out in style with three fantastic shows at Winterland. The first night, December 29th, is one of my favorite shows, and it was released on CD as Dick’s Picks, Volume 10.
Sadly, Winterland is no more, and condos now occupy the corner of Post and Steiner Streets.
— From Live Dead: The Grateful Dead Photographed by Bob Minkin 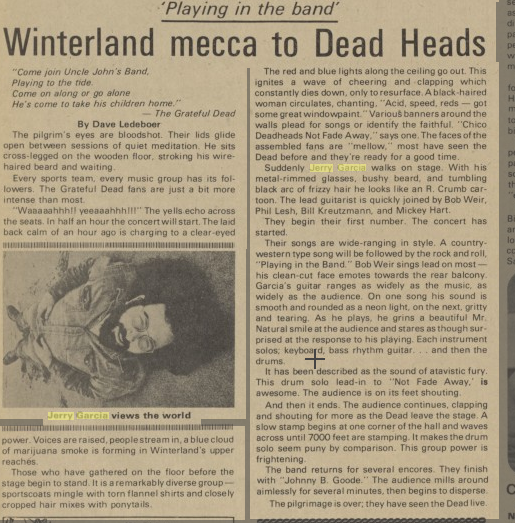 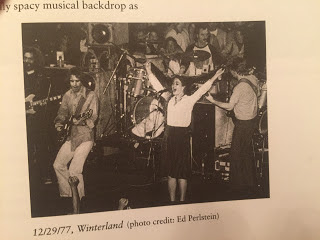 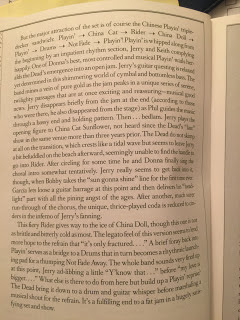 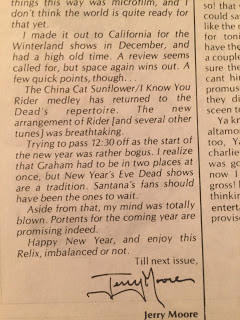 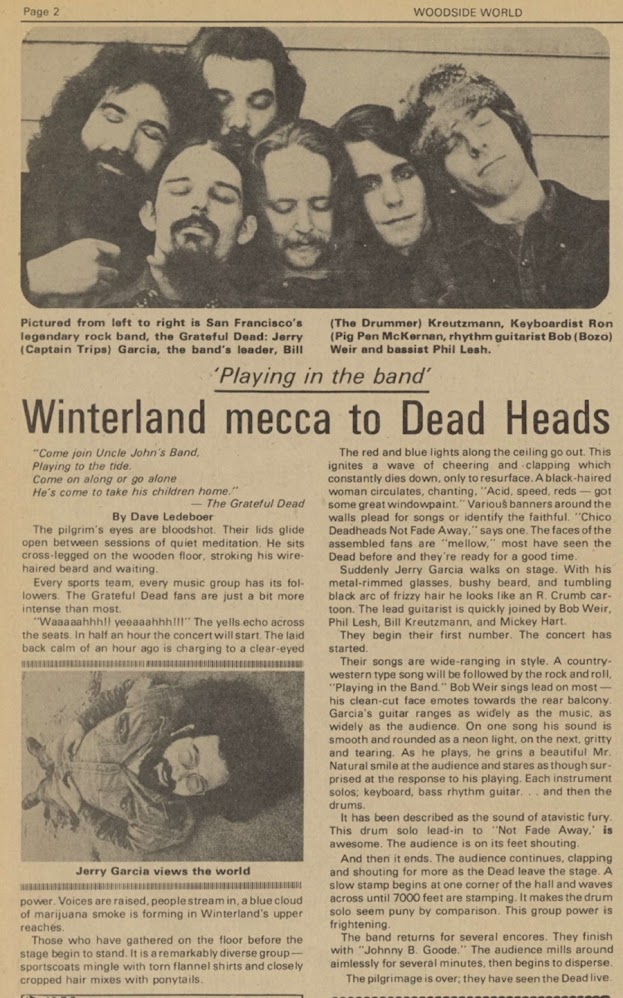