This Deadhead Ends His Teenage Years With a Better Jerry and Casey Jones, New Haven January 17, 1979

This was the show where the Dead returned to New Haven after the last second cancellation of the November 1978 show.  I attended both. Does Jerry look all better above? Had to say with the big beard and glasses, a la a circa 2005 Vegas World Series of Poker shark.

My college friends Willis and Marcus are from the Haven.  Do you guys really call it that? It was weird seeing the Dead tour in January, albeit they were a mix of make-up shows and new dates (why not, we are there in the snow already.  Here's tonight's files

The highlight of this show for me was as the clock struck Midnight (approximately, ok maybe 30-40 minutes before :)), and I ended my teenage years by turning 20, the Grateful Dead played Casey Jones for me for the second time ever (the first in Springfield at the prior show I saw on 1-15 as Terrapin>Playing In the Band>Casey Jones ended the show there, with no meat in the 41 minute sandwich other than Drums and Space, a one-timer).

I sat there, a bit teary eyed, and smiled at the band that had given me so much pleasure, and the sadness that I was losing my youth and soon would be an actual adult.  Thanks for that Casey Jones, Jerry.

So the six week break from seeing Bobby tell us "Jerry is really sick" ended and the set exploded into "Shakedown Street".  I was in the middle of a four show run over five days, setting my new record for consecutive shows by the band (at least until I would see six in a row in May),=.

I think these shows were a step down from the 1976-1978, mainly because there really weren't any new monster tunes added to the mix, so song selection suffered. I didn't know that the next night in Providence, on my actual 20th birthday would be the last Keith and Donna show.   Their drag on the end of their run probably played a part in my lack of usual Dead Head euphoria.

This was Dick;s take on the Steve Rolfe tape he received. I bet my pal Dave Weidner, another Dick supplier came up from PA to tape it as well, but I never wondered the floor to see that night.  Note
how Dick used to call it Scarlet Begonias>Fire on the Mountain>Scarlet Begonias old school style. 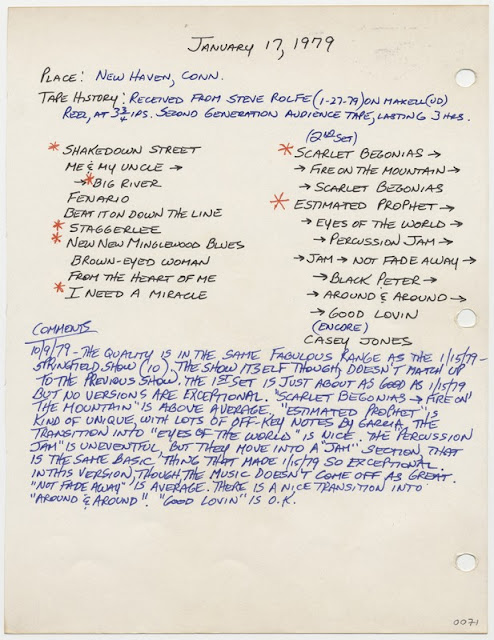 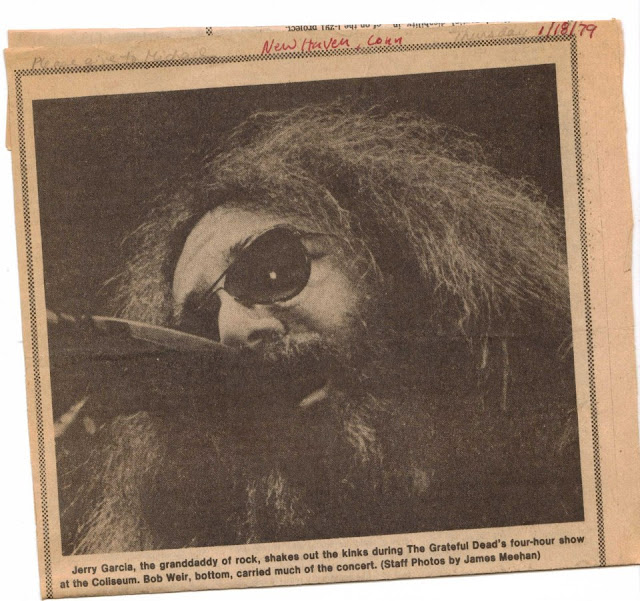 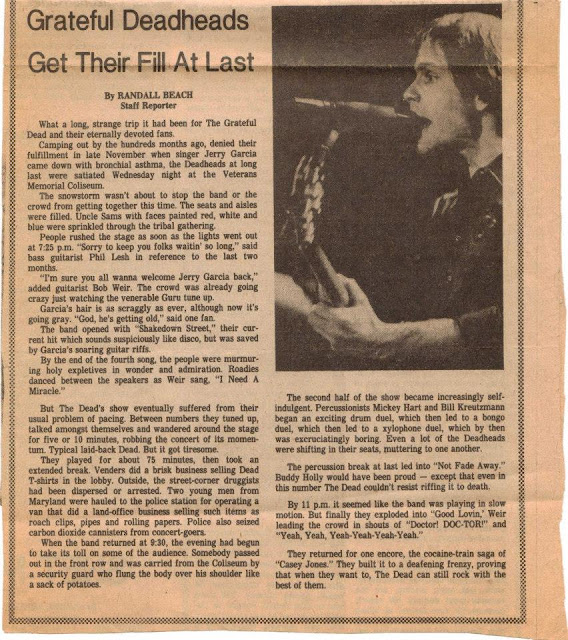