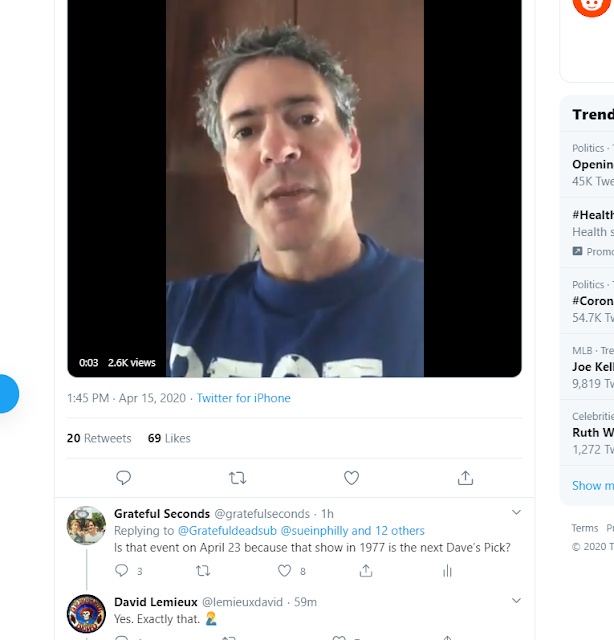 Thanks for this Charlie Miller and gang.

To Demon, who contacts me every April 23 to remind me of this show. Happy 40 Michael.

Thanks again to David Lemieux for releasing all six Dead shows I saw between April 30 and November 5, 1977.  Soon you can consider adding a seventh.  (If you release Colt Park and Binghamton that would make 11 in a row :)

Edit 11-6-77 with the release of Binghamton, Springfield is the only show of 8 I saw in 1977 without an official release

This was a beautiful and unique sounding show. Listen. And don't forget between It's All Over Now and Scarlet, there is a nice little Blackbird tease. Thanks, Bobby Weir for that.


Ten years ago, on the first day in June 2007 that dead.net pages created pages to discuss each show , I made the first comment to the Springfield 1977 page: 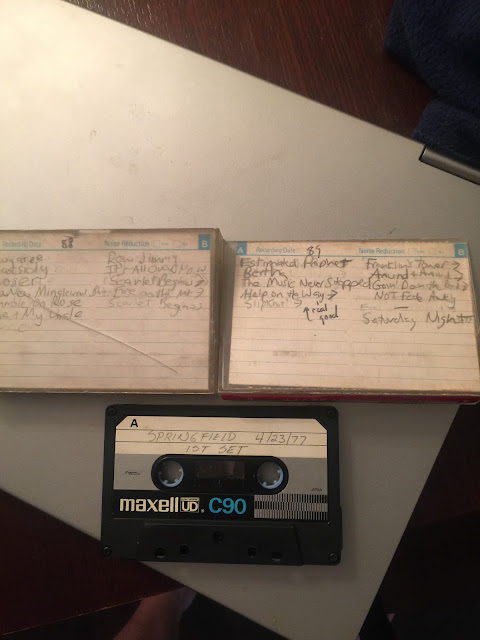 A few notes on my tapes of this show.  These were my 88th and 89th tapes in my collection, so among my first 50 shows I owned.  I taped over my audience tapes of the first set of Chicago 2-1-78 and second set of Milwaukee 2-4-78 for these babies.  These were taped by Dave Weidner (who I will blog in detail later, who also supplied tapes to Dick Latvala).  And my pal Jimmy Roux wrote on Slipknot! "real good"  You can listen to the not available before AUD of Dave Weidner's here:


So 1976 passed by and 1977 entered. Back then it may have been 3-5 months before Dead Relix detailed the Cow Palace New Year's Eve Monster in Volume 4, number 4 (available at the GDAO archive here)  So we were left with our memories of June and August and no real idea of what the gang has been up to since then.  For the 1976 shows, Blues for Allah had been released September 1, 1975, so we had plenty of time to absorb that before the June 1976 shows. However, Terrapin Station followed the more normal pattern of being released AFTER the shows (July 27, 1977), so we were flying blind to modifications to the band's repertoire for eight months, except for a little fragments from the Fall tour.

Cubby, Tom, Demon, Jimmy and I came to Springfield with open airs and open minds and little knowledge of what deal was about to go down.  Demon said he and Cubby hitchhiked down from Lewiston to Andover to my dorm on Saturday morning.  Tom and Jimmy had been camping and came with the car to Andover too.  We all said hello to Mr. Cobb and off we went west to Springfield.
See that guy up on the time next to me, on the right at the very very top of my blog. That's Demon. He was there.  It not being summer, I put on my shirt, for the April show in Massachusetts.

This night it poured.  Demon, who really, really, really loves this concert told me recently that he and I got separated from Tom, Cubby and Jimmy (which I don't recall) and we got swept up in his massive human flow into the show once they opened the doors. This was this cool hippie-ish dude who was talking to us, and he saw his brother being detained by the police and he yelled "My Brother, my Brother" and ran back away from the flow into the show. 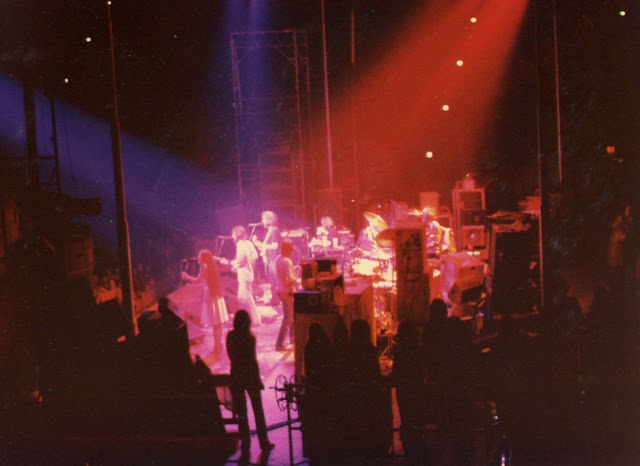 A rare shot by leerogersphotos.com Thanks Lee

The great photographer Jim Anderson has some amazing pictures of this night. Demon and I (and likely the other guys who may have come a bit later) ended up about where the @james appears, about a  third of the way back, a little bit left of center. Or in the second photo below, all the way to the leftside of the photo about midway between the top and the bottom. 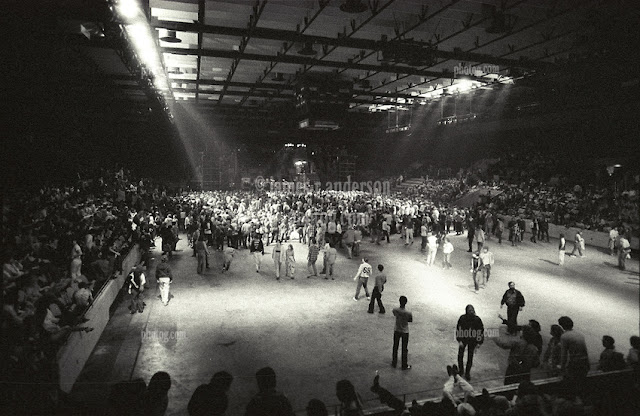 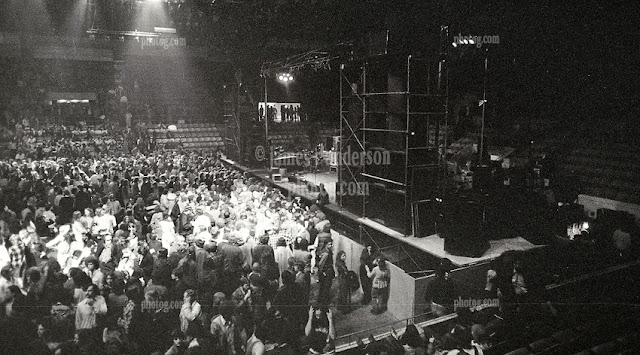 As soon as we arrived, another fine gentleman came by with a friend of his looking a wee bit frazzled. Turns out his name was Dave Weidner from Temple, PA. And Dave started to pull things out of his clothes like mike stands, and microphones, and cassettes and tape deck.  Dave later provided me with many tapes, including this show.  He is one of the best tapers whose recordings are not on the archive except for two, although I have a number of them.  I later found out Dave provided at least 10 tapes to Dick Latvala in two batches, but I will get to that story soon in a later post.

The first set is sharp and solid. Sugaree amazing.  But after the Blackbird tease the Dead spank into Scarlet, which is the first time I have seen it since song 3 first set of my first show June 9, 1976.  I likely didn't realize at the time that Scarlet at end of set will likely top Scarlet at beginning. And of course it did. And then Donna started chanting, and then everything starting getting really trippy like it sometimes happens at this show and the Dead are continuing on into something new.  It took me at least a few moments, if not minutes to realize this is no longer Scarlet Begonias and something new. Sometime that it beginning to feel like Fire, Fire on the Mountain. Wow. What a wonderful moment, maybe like no other than I have ever felt at the Dead show.  Well, I must be exaggerating as readers of this blog know that I have many. many discovery moments, or grateful seconds, that I have felt at Dead shows, but this first time transition of Scarlet Begonias>Fire on the Mountain.

Estimated Prophet, my first listen. "California" I wrote down on my pad.
Bertha
The Music Never Stopped

A fairly rare trio of songs to open a second set in 1977.   Estimated was found all over sets one and two in 1977, but only opened set two twice after this on 4-27 at the Capitol and 5-4 at the Palladium.

Bertha was also rare in set two, especially after the opener slot, and Music saw a little set two action in 1976-1977, but not in middle of the set.

Then I finally got to see Help on the Way>Slipknot!>Franklin's Tower which continued into Around & Around>Goin Down the Road>Not Fade Away, which was more of a 1974 thing than in the late 1970s after the fishing trip.  This is magical and not repeated in any similar fashion in my seven additional travels to Dead shows in 1977.   There was something magical about this jam especially the Help sequence. This was also the only time I ever saw the Dead use Around & Around in the middle of the set. Happy 40th Springfield.  I got to see two more great shows here in 1978 (at the Mescaline show) and 1979 (with the I Need A Miracle>Shakedown Street frenzy). Soon I would be moving to California in 1980 and leaving you behind.

Later that night, we had four crazed individuals with designated driver Tom behind the wheel in a massive Massachusetts rainstorm where we ran into the dark and put up a tent maybe 10-20 miles east of Springfield in some place we really couldn't identify due to our crazed state.  Tom saved us and probably put up 95% of the tent.

The next morning, I woke and walked out the tent and saw that we were about 20 feet from a huge body of water I believe as part of a dam.  Wild.  Didn't even know we were near water.  After this I saw 76 more Grateful Dead concerts. I realize now that this may have been my favorite one. I saw some better shows, many in 1977 even, but this was the one I'll always remember.

I have provided a number of sources and reviews here including a great review of Thomas W Keffer, who was a Harvard student in 1977, the Dead Relix Jerry Moore review, Dead Listening comments, pieface from dead.net and my own 2007 comments, and some nice photos from Jim Anderson and from the U Mass student paper (full page of photos, no review). I don't like the Wall Street Journal's review, but alas it's still interesting.

The best reviews I find are from the super fans 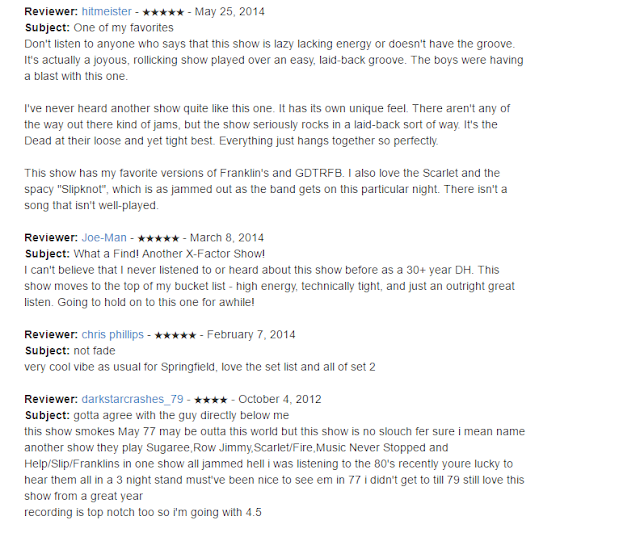 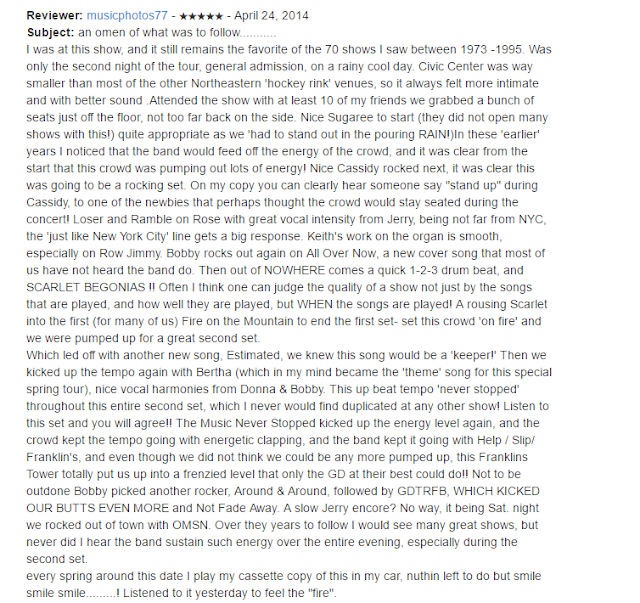 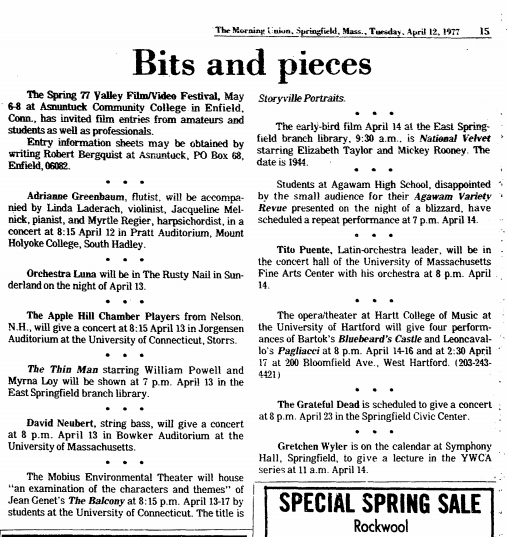 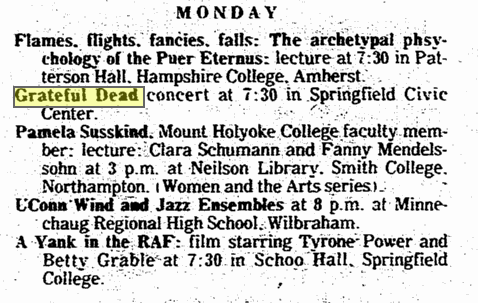 
Here we have a stand out show from the Spring. Great copies of this show have stood the test of time very well. There are two masters up on archive.org now. I've opted with the Jerry Moore recording here. You will not be disappointed.

This show has just the third performance of Fire On The Mountain, and it is wonderful. The Dead are locked in to this new groove, and clearly feeding off of the energy of all the new material. Sticky syncopations and that psychedelic shuffle-slip-n-slide prevail. Jerry is dipping deeply into the creative well again and again. Just when you think he's turned a last corner, he hasn't, and you can only smile along for the ride.

The Wall Street Journal dude has no clue :)

While they sometimes soared, the most lasting impression their concert performances made on me, besides a recognizable refrain here and there, was on my inner ear. I sometimes think the band’s greatest legacy is the problems I have these days hearing pretty much anything anybody is saying to me at cocktail parties.

If seeing Mr. Garcia up close constituted a peak experience, I can also pinpoint the low, a concert at what was then the Springfield Civic Center in Springfield, Mass., in probably 1977.

They meant to the stage.

I don’t mean to suggest that I was stone sober, only that I’ve never understood the appeal of zombies, especially when the undead include people I’d formerly recognized as friends.

So I fled the arena, in the process almost getting run over by the Dead’s limousines, arriving to spirit them away at show’s end. Dressed in overalls—for the first and last time—I crossed the deserted street, huddling in the doorway of a McDonald’s. At that instant the fast-food chain seemed no more or less a brand, a symbol of capitalist triumph, than the sold-out arena across the street.

I didn’t stay huddled for long. My New York City boy instincts kicked in when some locals issued from a car wearing predatory smiles. Perhaps it was just paranoia, but I got the impression they saw a freshly scrubbed Dead Head as easy pickings. I wasn’t going to hang out long enough to find out.

I recall with relief a song of Steely Dan’s coming on the car radio, their music sounding like the antidote I’d been seeking all evening; it resonated with a willful inscrutability that seemed designed to dissuade idolatry.

Don’t get me wrong. At their most melodic, life-affirming best, the Dead are right up there with the Beatles.

It hardly matters how many times you’ve heard the songs. Wisdom has rarely been delivered in such digestible doses.

But that’s its beauty. It need never say farewell. 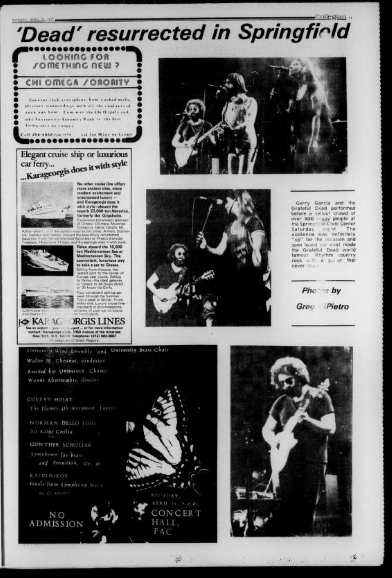