Another college newspaper, another amazing review of a Grateful Dead show on September 26, 1976.  This time it's the Daily Orange from Syracuse, NY.

In the Fall of 1976, the band played some remarkable sounding shows; they are really hybrid between 1976 and 1977, between the past and the future. Actually I love the entire three week long tour from Duke to DTLA, but this one is special, especially starting with Let It Grow (turn it on above)

You mean the ending of set one with Let It Grow>Goin Down the Road?  For a second at the end, it almost sounds like it's going into Stella Blue.

Or you mean like
the monster from set two:

Yes, this is a Dick's Pick, partnered with Landover 9-25 for Dick's Picks 20, but here is a well regarded audience of the same show

Fisch went on to a remarkable music career. http://www.mixonline.com/news/profiles/composer-spotlight-irwin-fisch/372867
See what happened when you write something well thought out and positive about the Grateful Dead

Irwin Fisch is an Emmy-nominated arranger, composer and performer who creates music for media and live performance.

He has scored numerous television movies and miniseries, and composed hundreds of scores and songs for advertising. His arrangements have been heard by millions on the Kennedy Center Honors, the Tony Awards and the Super Bowl, on stage behind Bette Midler, Beyonce and Barbra Streisand, on Grammy-nominated recordings, and in Tony-nominated Broadway musicals. He serves as arranger and co-producer of musical performances for New York City's annual 9/11 Commemoration at Ground Zero. 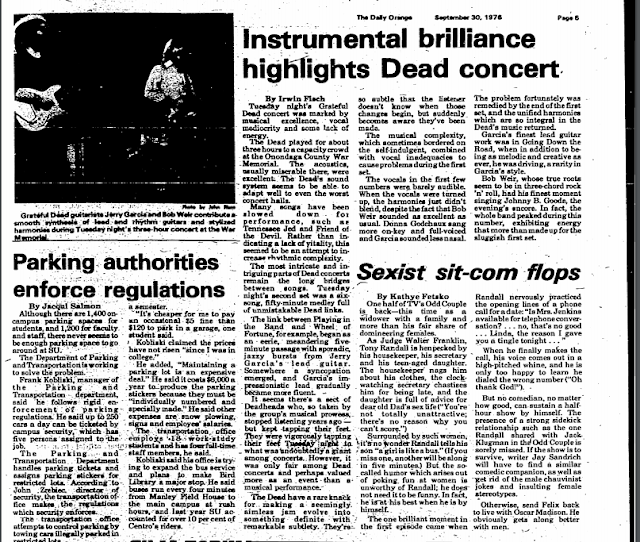 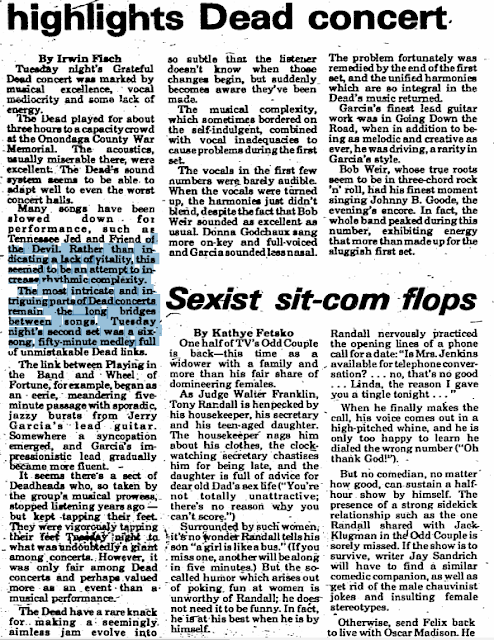 House band for history: The Grateful Dead at the War Memorial If the Onondaga County War Memorial had a psychedelic house band, you’d have to go with the Grateful Dead. The California rockers, whose rolling style fused many musical forms, played the downtown arena six times.

Their early Syracuse concerts came amid the turbulence of the early 1970s. Knowing the band attracted a legion of loyal "Deadheads," many of whom indulged in marijuana, Syracuse authorities beefed up enforcement when the Dead arrived: The first show in 1971 led to 16 arrests. By the late 1970s, the band started to assume its mantle as a living bridge to the "peace and love" movement. Those who followed the Dead from show to show grew to expect some inspired musical moment ...
Such as the War Memorial show of 1978, when the band offered Warren Zevon’s Werewolves of London as an encore. The late Jerry Garcia, lead guitarist for the Dead, "dug Warren and loved the ambiance of the song," says Dennis McNally of San Francisco, longtime historian for the band. After that tour, and until Garcia’s death, the band rarely played "Werewolves" - except as an occasional treat on Halloween.
The Dead shows are now part of the War Memorial’s extraordinary musical heritage, the focus for an in-depth piece Sunday by columnist Sean Kirst. The story will be accompanied by a bevy of treasures at syracuse.com, including this link to the Dead’s 1978 performance of "Werewolves" at the old arena, in which a joyous Syracuse crowd of 8,000 joins repeatedly in an impassioned chorus:
"Ahhh-Woooooooo!"
One of the best of the Grateful Dead listening blog analysis
http://www.deadlistening.com/2008/09/1976-september-28-syracuse-ny.html