Above the Gorges, The Grateful Dead Walked On Water Once, Cornell May 8, 1977

I mostly remember the gorges the first time I went to Ithaca.  It was 1977. November 3.
Darn I was so close. I saw Springfield April 23. Then New York City on the 30th, And Boston on May 7. But alas I was still in high school, senior year, and I had to be back and sign in to my dorm by 6PM every Sunday. Still got to see four shows (Hartford was three weeks away) in the Spring and four more before the year ended bringing me up to the 11 in my short career seeing the Dead so far.

Rick Sullivan, who scored me tickets and many, many tapes and was both my East Coast and later West Coast best connect to the Dead invited me to the November 4-6, 1977 shows in Upstate New York, and he actually is only one of two people I know (Bobby Morris who moved to LA, not Bob Morris, who became a taper) to see the Cornell May 8 show.  Funny Rick, I don't recall you telling me the Cornell show was better than the November shows, but I digress (ok, the exact quote is "Yea, i probably didn't say Cornell was better at that point.  Nov. 77 was my first time seeing 3 shows in a row, so that was sweet.  Cornell never was legendary until the BB tapes")  At the end of the day, in 2017, Rick Sullivan says: "So I guess I'm sayin' that Cornell is NOT the greatest show ever.  It's my favorite of seen shows, but not the best ever" 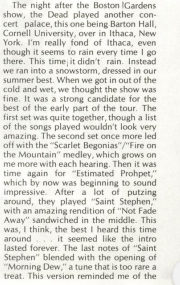 Well, the Brown Eyed Woman is perfect. And so is the Dancin' In The Streets. Both the first sets of both the night before and the night after were just as magical. That Half Step>Big River still gets to me even after 40 years (how can I be this old?).
Of course, the second set was where it really happened.  Guys, I wouldn't change a note. You all know what happened. No need to review the mosted reviewed show in history

And it was a wonderful experience and there is a great Betty Board and now an official Grateful Dead release (and a very nice new book by Peter Conners, excellent job Peter! just read it last night, glad you got to talk to Jerry Moore too). And many tributes, some of which I reproduce below.
The headyversion's tell a story of what people like about this recording and mainly it's the Scarlet Fire, the Dew, and Dancin and Brown Eyed Woman from the first set. the Not Fade Away should have more votes by the way.  The readers of Deadbase XI has a similar POV 22 years ago with top picks under Dancin', Estimated, Morning Dew and Scarlet>Fire at least. 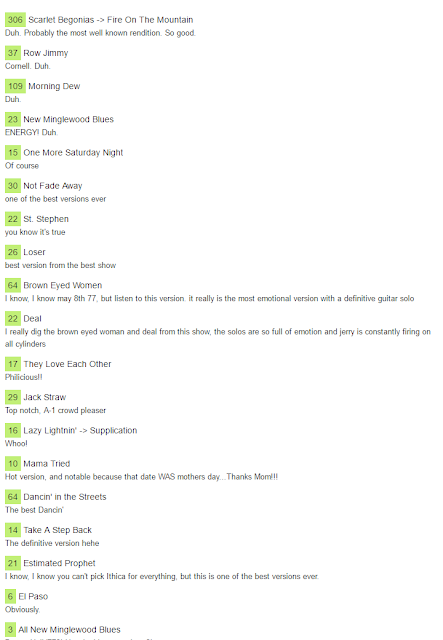 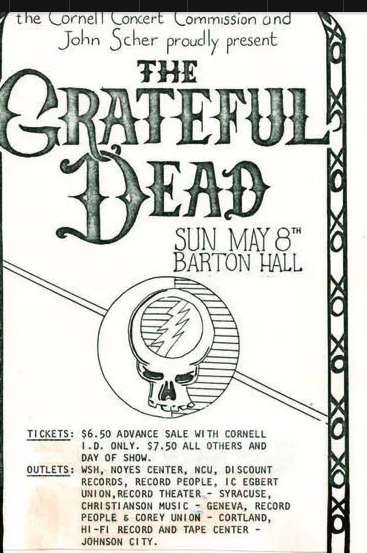 The same could be said for my last 1977 show in Binghamton, NY.   Also got the hot Good Lovin' our of Scarlet>Fire, a top-shelf Wharf Rat, and that crazy Jimmy Page inspired Truckin' at the end of the show.  Still no Dew, but I don't recall Rick Sullivan telling me that night that Cornell blew this show away. If you had to miss May 1977 on a Sunday night at Cornell because of "checking into your prep school dorm" but saw three shows in Upstate New York, six months later because you could ship classes and hitchhike to Ithaca, I'd say I did ok. I saw three monster shows in Upstate and missed "only" what is considered the greatest show of all time by many.  My point is that even if Cornell is #1, if you got to see say 8 of the top-20 or 25 shows of 1977, like I did at age 18, I was pretty blessed.
Cornell, I will always love, but all of 1977 was magical too.

From the deadlist.com source , one million recordings that night.

On May 23, the Library of Congress’ National Recording Registry announced this year’s list of 25 songs, instrumental pieces and historic recordings to be added to the prestigious institution’s permanent collection. There’s lots of great stuff on the list: Prince’s “Purple Rain”; Dolly Parton’s “Coat of Many Colors”; Vince Guaraldi’s “A Charlie Brown Christmas”; Donna Summer’s euro-disco “I Feel Love”; the first-ever commercial recording—a version of “Twinkle Twinkle Little Star,” created for the first talking doll by one of Thomas Edison’s employees; the only surviving record of early 20th century Broadway sensation Lillian Russell; the 1943 NY Philharmonic debut by conductor Leonard Bernstein; the Grateful Dead’s May 8, 1977, concert at Cornell University’s Barton Hall… Whaaaaat? Where did that one come from?
Maybe it helps to have friends in high places. After all, Mickey Hart has been associated with the Library of Congress for many years. But when I asked him about it the morning the list was announced, he denied any involvement. “What can I say? The people have spoken!” he said with a laugh. “It’s true that I wrote part of the legislation for the [LOC’s digitization and preservation] project in 2000. It was copied after the Lucas-Spielberg Film Preservation Act. But when it came to voting, I recused myself.”
Voting? “People have been voting all year, and then the board decides what is culturally significant, and the librarian, James Billington, makes the final cut and the call.”
Ah, the power of Dead Head unity in action. Stuffing the ballot box—a tradition as old as this great republic itself!
All kidding aside, a copy of Cornell 5/8/77 is a perfect choice for the National Recording Registry. Consider this: It has never been released commercially (legally), yet it is probably among the most collected, traded and downloaded concerts by any band ever. That’s not hyperbole, either.
The original pristine audience recordings of this show started circulating among tape collectors very shortly after the concert, and quickly became a favorite of everyone who heard them—this at a time when Grateful Dead tape trading was just beginning to explode nationwide. In the pre-digital age, when all we had were cassettes, the show was part of any respectable tape collection, passed among untold thousands of people. It was always big news each time a cleaner, lower-generation copy would come through my circle of traders; had to have it! (It was also bootlegged as vinyl records and, later, CDs, and sold — boo, hiss! Not cool!) One of the late, great taper Jerry Moore’s greatest legacies is his audience recording of 5/8/77. I'm not sure whose recording I had originally; I didn't know any tapers by name back then.
But we really thought we’d gone to heaven when the much-ballyhooed show turned up among the famous “Betty Boards” in 1986-87—200+ hours of soundboard masters recorded by Grateful Dead sound engineer Betty Cantor, who stashed them in a storage locker for years, until they were auctioned off (due to non-payment of storage fees)—and bought by Dead Heads! What a treasure trove of tapes that turned out to be! So, gorgeous new SBD copies of 5/8/77 soon circulated to hundreds of thousands of collectors, further solidifying its reputation. (This chain of events also explains why 5/8/77 is, alas, not in the Grateful Dead tape vault, where it rightfully belongs, as the Dead, not Betty, were the rightful owners of their own master tapes, auction be damned.)

Jay Mabrey, Cornell class of ’77,designed this poster for the show.
The show was reproduced many thousands more times when collectors transferred their tapes to CD. “Gotta get Cornell!” Again. By the time online live music repositories started popping up in the late ’90s—such as etree and the Internet Archive (Archive.org), who entered into a cooperative arrangement—high quality versions of the show became available to anyone with a computer, for streaming or downloading. There are currently 15 versions of 5/8/77 up on Archive—audience recordings, soundboards, and matrix combo versions. I frankly haven’t investigated deeply enough to know what the differences are—which came first, which is an “upgrade,” etc. (My own rule of thumb with Archive Dead shows is I look for Charlie Miller’s name, and if it’s attached to a recording, I’ll usually check that out first, since his name is synonymous with the highest quality transfers and upgrades.) Want to know how many times 5/8/77 has been downloaded from Archive.org? Are you sitting down? I added up the numbers beside each version: 928,006 as of May 23! I’m guessing that adding in all the copies that were made (tape and digital) in the years when the Grateful Dead was actually around, and when collecting was at its apex, the number could easily reach 2 million. Incredible for a so-called bootleg recording!
Is Cornell ’77 the greatest Dead show ever, as many have asserted through the years? (It’s been a consistent poll-winner.) Is it even the best show of the justly heralded spring ’77 tour? It doesn’t matter. It’s all opinions in the end, and we each have our own preferences for certain years, certain songs, etc. I don’t like to deal in those sorts of absolutes.
But it’s indisputably an amazing show. (OK, some might even dispute that. Sorry, this time you’re wrong!) The first set is solid and occasionally spectacular—the “Loser”; that speedy-confident “Lazy Lightning” > “Supplication”; “Row Jimmy” with beautiful Garcia slide, a fantastic “Dancing in the Street” that puts every disco song on the Saturday Night Fever soundtrack (released fall of ’77) to shame. The second set reaches some of the highest moments the Dead ever attained—particularly the jam after the second (final, in those days) verse of “Fire on the Mountain” and the completely transcendent version of “Morning Dew,” which has to be heard to be believed. Throw in “Scarlet,” “St. Stephen,” a really dynamic and elongated “Not Fade Away” and the then-new “Estimated Prophet”—each played with unbridled energy and enthusiasm—and you’ve got one helluva set. Is it perfect? No. Does that diminish its greatness? Not at all.
I asked Mickey what, if any, recollections he has from the show? He laughed. “Oh, I don’t remember shows that way. I know it’s famous. I guess there’s a great ‘Morning Dew’ and some others. I haven’t heard it in many years. But if the Dead Heads say that it’s one of the best shows, I believe them. They know.
“What’s funny is my wife [Caryl] was a student at Cornell at the time but she didn’t go to the show. She was off with her boyfriend seeing Barry Manilow or some dumb thing! She never got to see the Grateful Dead until we met in the ’90s.”
Well, it’s never too late to get into 5/8! Dig it now, Caryl!
All right, now it’s time to put you on the spot. If you were to choose just one Dead concert to represent the band forever in a digital archive, which would you pick and why? 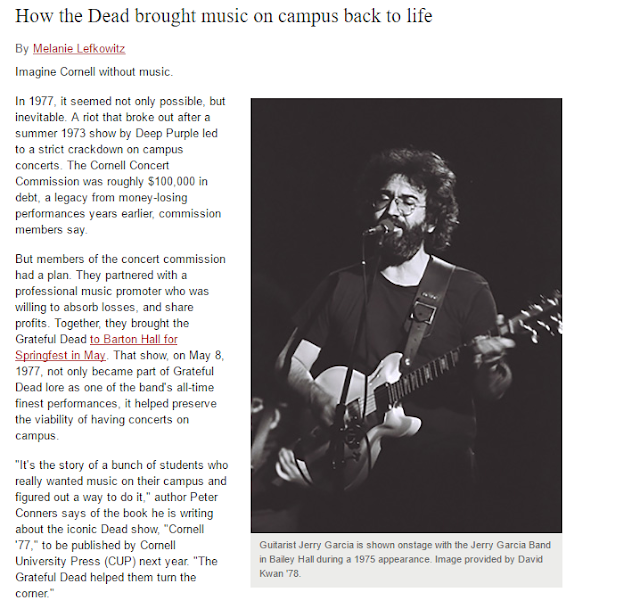 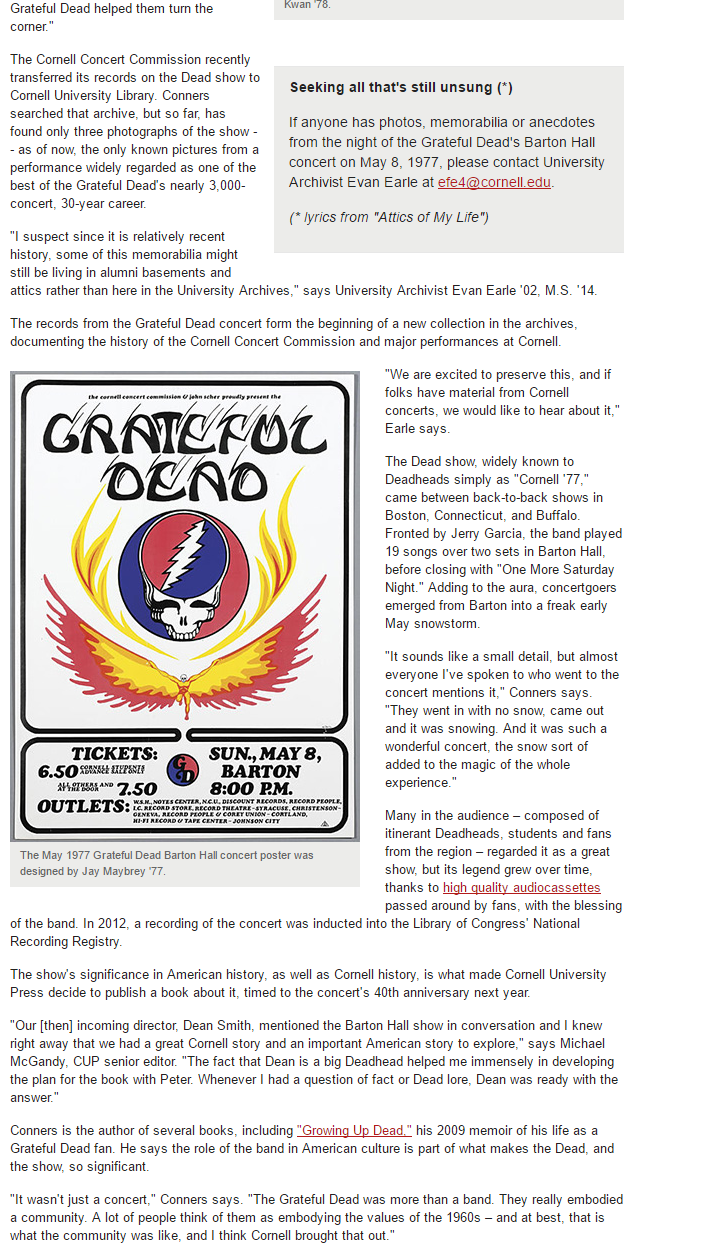 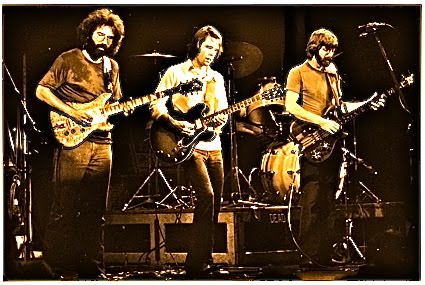 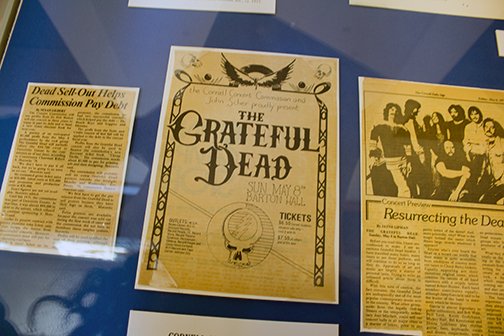 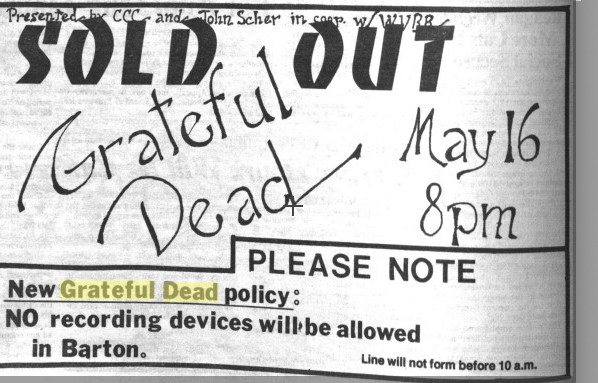 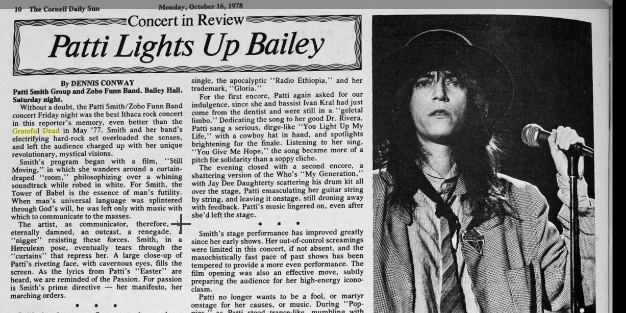 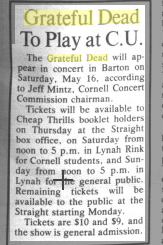 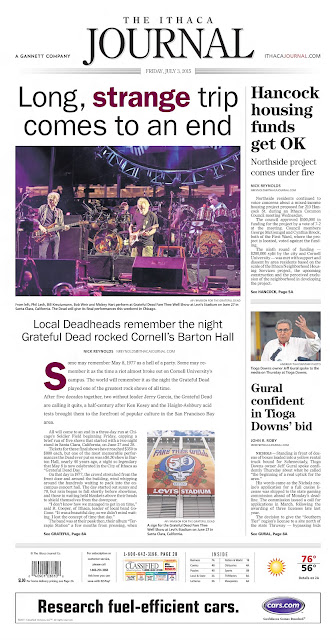 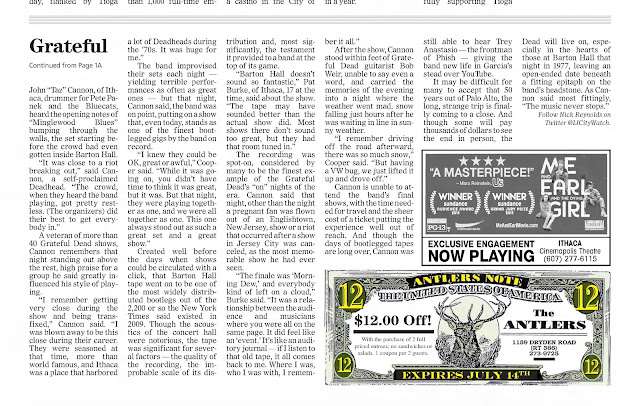 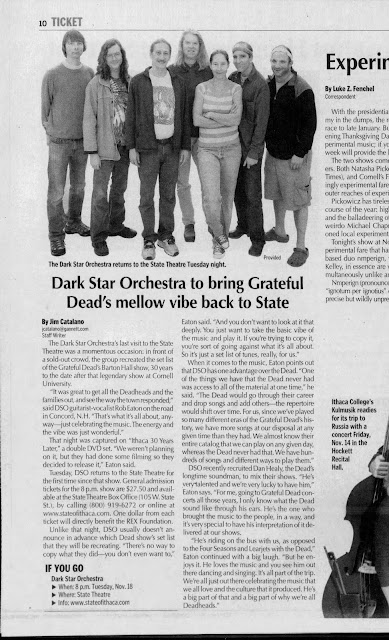 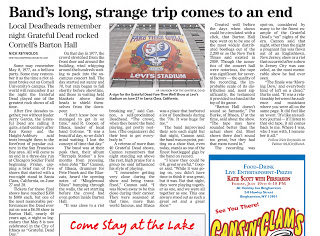 Email ThisBlogThis!Share to TwitterShare to FacebookShare to Pinterest
Labels: 1977, 1977-05-08