It was a blip in time, some clubbing jamming, an LP and a short tour of the northeast for a week or so in late January 1972. But it makes for some interesting music. Most of the January 26 show is available on a long out of print Live LP, but today you can have it all, one way or another. (see soundcloud above) This darkness got to give.  Glad to see that there were at least two well researched and written thoughts on this Wales thing from Light Into Ashes and JGMF
https://archive.org/post/357084/jerrys-jazz-style-howard-wales-tour-pitb-march-72
http://jgmf.blogspot.com/2010/12/hwjg-quick-question-on-january-72-east.html
https://www.relix.com/articles/detail/howard_wales_on_jerry_garcia_hooteroll_and_beyond

The Boston Globe stayed away from this show, but the Boston Herald makes a few short comments on Jerry and Howard. At least, the students at Harvard wrote a longer and more detailed review.

By ROGER L. SMITH, February 11, 1972 Harvard Crimson
0
They came as they always come, carrying their sacraments with them; wineskins over the shoulder and carefully rolled joints in their pockets. The rank and vile of sub and inner urbia filed neatly into the beige somnolence of Symphony Hall. There it was, a ritual procession with all the passion of Macy's Thanksgiving Day parade; the worshippers were as enthralled as a gaggle of catatonic turkety buzzards watching a tennis match; the penitents approached their shrine with all the fervor of the champagne cooled Boston Pops crowd. It's not that rock concerts aren't interesting anymore, there's something perversely fascinating in contemplating these ambulating escapes from Madame Tussaud's. The music, with few exception, fulfilled the audience's craving for a thousand decibel dry hump. And Howard Wales' sterile charade delivers: drum solos with all the pulse of a seconal addict; keyboard work with all the sensuousness and imagination of a computer print out; treacly singing; the stage presence of a sloth; and above it all in smug squalor was the ego of Wales, ballooning over the audience with all the magnificence of a slug in heat.
The only member of Howard Wales and Friends who did not join in the cosmic ineptitude was Jerry Garcia. Standing to one side of the stage, he seemed at times almost disgusted by Wales' displays of pretension. He played only half of the set, but even then was not able to lead the group out of the mechanistic vacuum they served the audience.
While Garcia was playing the band seemed to be the ultimate extension of the trend toward long improvisations. Their failure illustrated the basic drawback in the technique: very few musicians have the musical vision, the expertise, or the experience to pull off long jams. Long improvisations are extremely boring unless the musicians have something to say and the context into which to fit it. The Dead and the Allman Brothers are the only rock bands so far to succeed with this format, and Garcia's failure to make the technique work with Wales proves that one musician's expertise cannot be grafted onto another inexperienced band with real hope of success.
Garcia looked as if he wished he were back with the Dead, and if he wants to accomplish anything in improvisational music he'd be better off back with them.
John McLaughlin and his Mahavishnu Orchestra, in spite of their second billing, gave a one-hour demonstration of some of the yet untapped potential of rock. They were introduced to mild applause, and came on stage quietly. McLaughlin, a small man dressed in an Indian cotton shirt, baggy cords and tennis shoes, hefted the strap of his Gibson double-necked guitar over his sloping shoulders. With only a polite smile from McLaughlin, Jerry Goodman arched the bow of his violin high into the air and blasted out the opening run of "The Meeting of the Spirits." The band was as tight as the Dead at their best. That first number, as internally complex as anything the Band has ever done, soared and rolled for 12 minutes, with McLaughlin raising his guitar skyward in devotion, running off riffs that Hendrix never dreamed of.
The members of the Mahavishnu Orchestra do not smoke, drink or eat meat, and this discipline is reflected in their music. The group does not have the carnivorous overtones of Grand Funk Railroad or Alice Cooper, the smoky sense of the Doors or the Dead, or the alchoholic tendencies of Commander Cody and His Lost Planet Airmen. They are truly an organic band. Their jazz-oriented music is, according to McLaughlin, the only rock music today to which one can meditate.
Some of the band's spiritual intensity comes from their devotion to Sri Chinmoy, whom they consider to be divine. McLaughlin claims, in fact, that he is only a medium, that Sri Chinmoy is actually playing the guitar.
McLaughlin has chosen to work toward a musical intensity that aims inward rather than outward. There is never a wasted note, yet the improvisation by each member of the group is always present, always building and directing the music. The band's music has integrity, perhaps more than that of any other rock group. Solos are not proving grounds for technical virtuosity, but ways of building the music.
After an hour McLaughlin left the stage like a small child after his first recital. The audience, impatient with the wait for name brand Garcia, gave McLaughlin some applause, but it was certainly an inadequate response to a remarkable performance.
It is only through musicians such as McLaughlin that rock music will emerge from the stoned age. 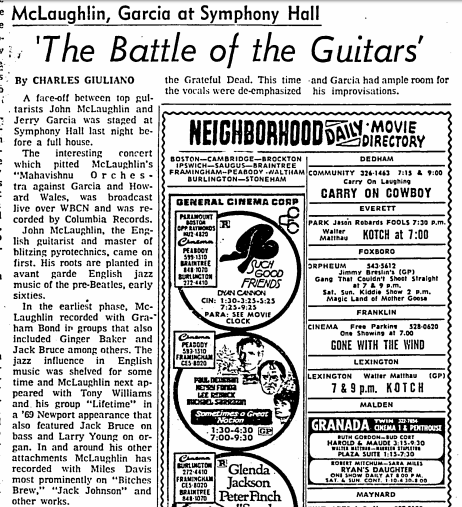 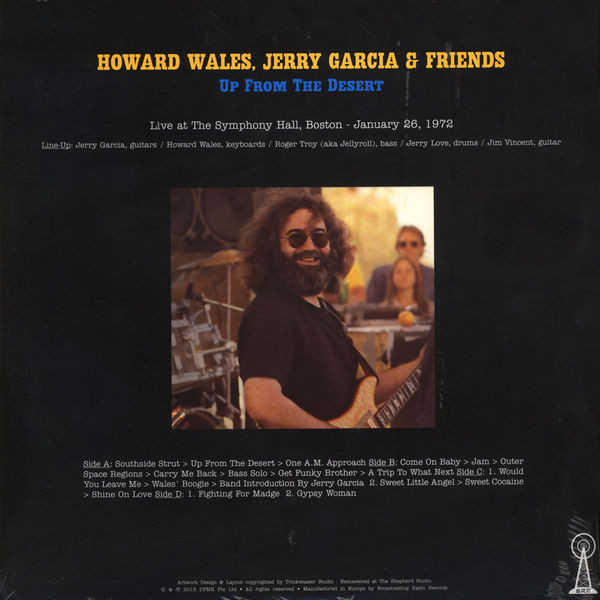 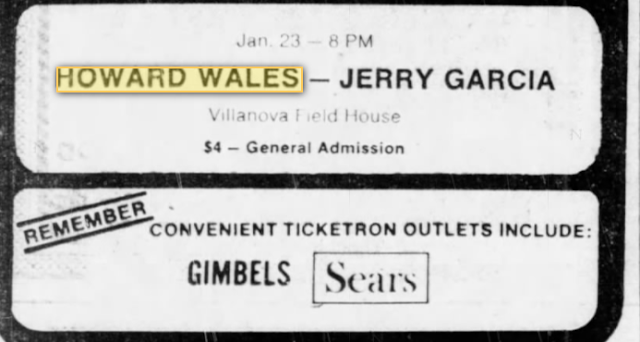 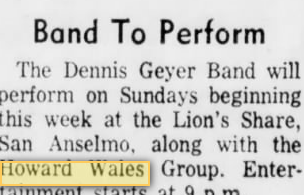 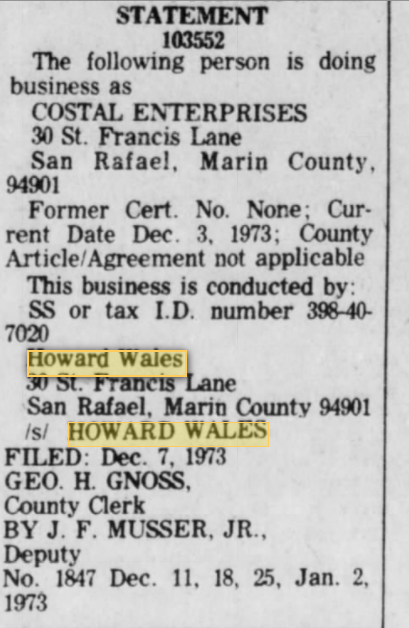 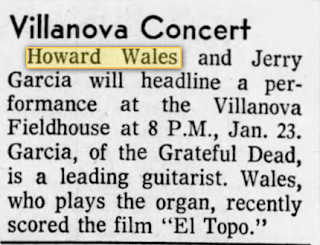 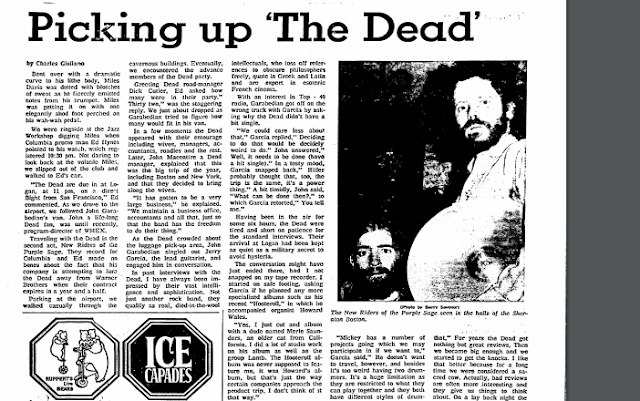 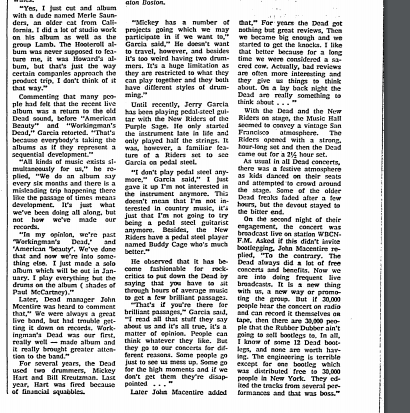 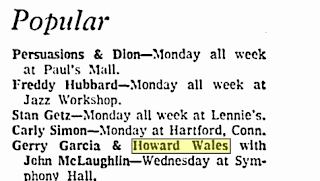 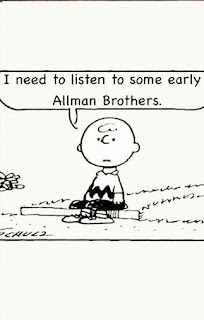 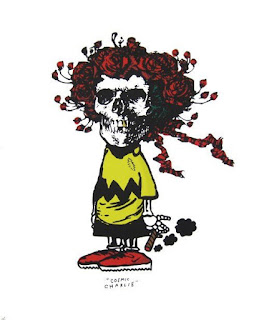 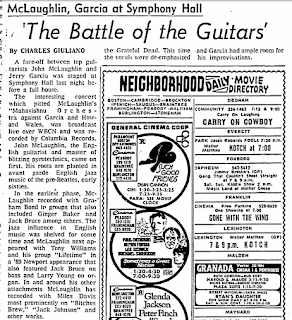 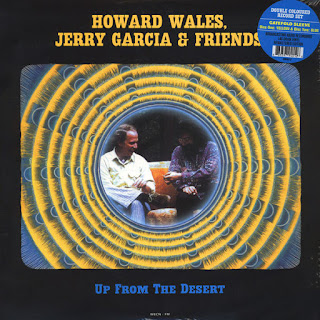 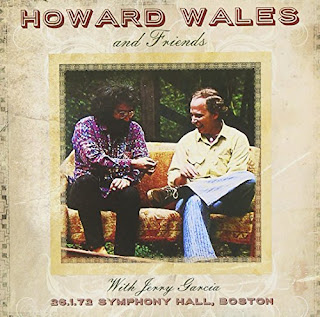 Email ThisBlogThis!Share to TwitterShare to FacebookShare to Pinterest
Labels: 1972, 1972-01-26

this was a wild read good stuff