The pairing of Estimated Prophet and Eyes of the World in May 1977 marked the beginning of the more solid set structure.  True Dead Historian Blair Jackson wrote about this in his book on Garcia.
After this it would be rare to see a fully explored Playing In the Band in set one. I've decided to analyse second set structure because it played a part in how often and excited I was in seeing the Dead.  I love back five years to 1972 and look dead ahead five years to 1982.  No need to look before 1972, since those were the freewheeling days of the old West where anything could happen and often did. 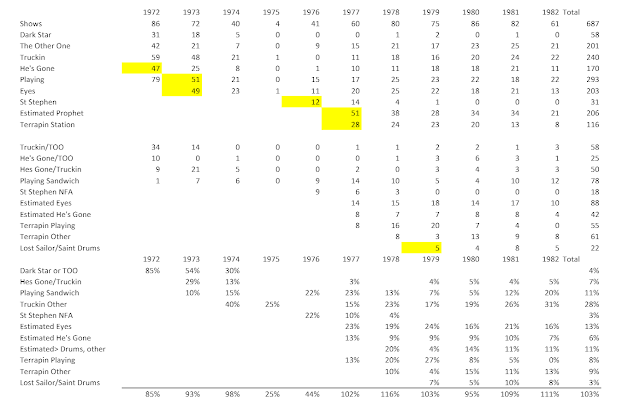 KEY JAMMING VEHICLES, 1972-1982
1972:  The Other One, Dark Star, Truckin', He's Gone
1973-1974: Dark Star, Truckin, The Other One, Eyes of the World, Playing in the Band
1976: The Other One, Eyes of the World,St Stephen, Help on the Way, Playing In the Band
1977: Estimated, Eyes added to the 1976 mix
1978-1982: Estimated >Eyes, Terrapin>Playing, He's Gone>Truckin
Phil's holding pattern comment reminds me of when Bruce joined the band and tried to get the boys to open a show with Wharf Rat.
In 1972, you either were going to see a monster Dark Star jam into any number of songs or The Other One monster jam, often paired with Truckin. There was only one show with both (1972-05-07) and less than a dozen shows with neither.  He's Gone was moving from set one, song two to a jamming event as well. Sign me up.
In 1973 and 1974, Wake of the Flood introduced Eyes of the World to the mix as well as the conversation of Playing In the Band to later part of the show.  Although Dark Star occasions slowed down considerably, in 72 shows you were very likely to see Playing (51), Eyes (49) and/or Truckin (48). And I am not even counting the Here Comes Sunshines and China>Riders. Sign me up again.
1976 was truly the wild west version 2. totally dissimilar to the 1968-1971 era, but well rehearsed and different nearly every night.  1977 continued in this vain, with the introduction of Estimated and Terrapin, of course.
One of the biggest issues for the band;post-1977 was the lack of variety if the band didn't have a new jamming tune.  Estimated followed by Eyes, for example was played at about 20% of shows in 1977 and 1978, and still the same number of shows in 1981 and 1982. There was nothing brand spanking new , either revived like St Stephen in 12 shows out of 41 in 1976.
So in 1978, at a random show, you had a good chance of seeing either a Truckin jam, Estimated/Eyes, Estimated/He's Gone, or a Terrapin Playing (often followed by a sandwich). And by 1982, you pretty much had the same odds  (although you see Sailor Saint drums which wouldn't be considered tier 1) 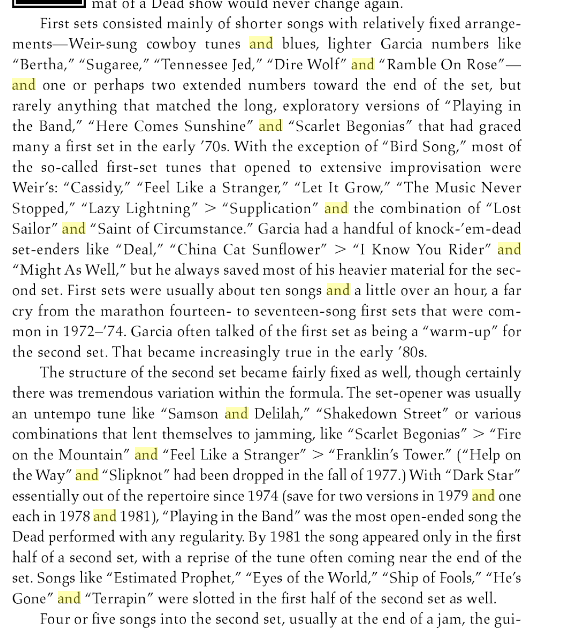 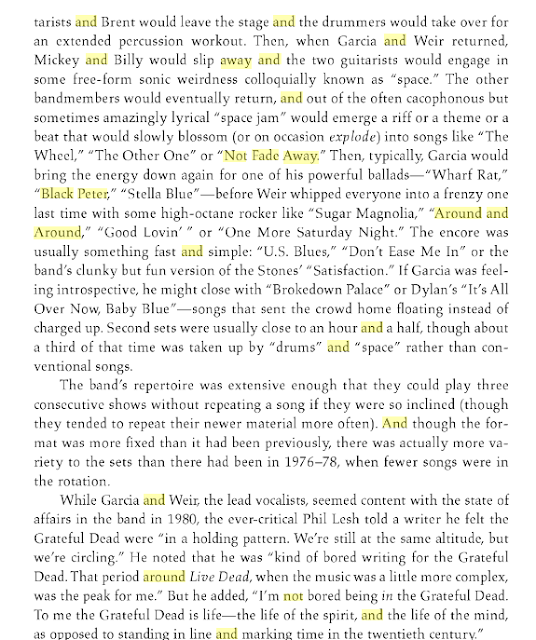 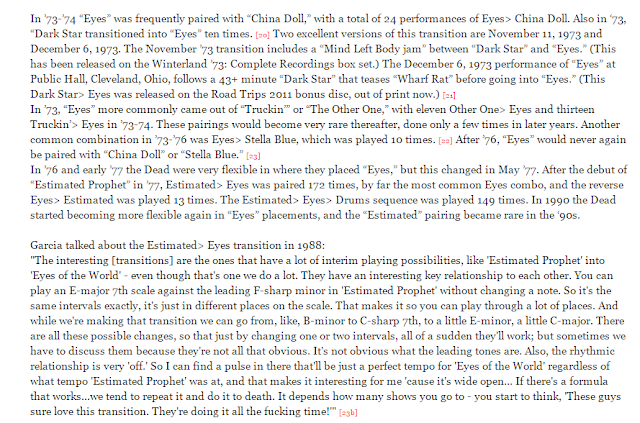