Dire Wolf, Dark Hollow, It Must Have Been The Roses, Cassidy, I've Been All Around This World, Monkey & The Engineer, China Doll, Heaven Help The Fool, Bird Song-> Ripple 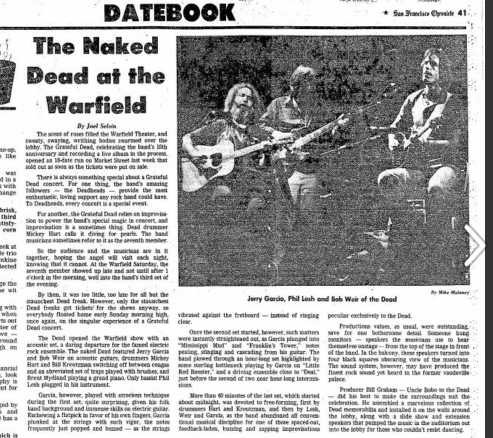 A Stanford Student Review of the 8th show
Beating a Dead horse
By Charles Buckley
Though a Grateful Dead show in the Bay Area is about as common as fog hanging over the Golden Gate Bridge, the current set of Dead shows at the Warfield Theatre have taken on a special meaning. The Warfield seats no more than 2000 people, and it is not often that Grateful Dead fans get to see the band in such an intimate atmosphere. Add to this the fact that it is the band's 15th anniversary, and it becomes clear that it was necessary to raffle the tickets, despite the fact that there are three weeks' worth of performances. Though the Dead generally do two sets, both electric, they have surprised and delighted the Warfield crowds by opening each show acoustically, something which they have not done since the early seventies, and then following with the two electric. It was a little past two in the morning when the Grateful Dead ended last Saturday night's show, the eighth in the series of fifteen. The show had begun five and a half hours earlier, with Jerry Garcia singing "Debellum Blues," a song from the far gone past which drew blank stares from many of the recently converted teenage Dead-Heads (some of whom appeared to be younger than the groups's 15 years), but elicited pleasant howls from those Dead-Heads from way back when. The rest of the acoustic set consisted mostly of older material as well, such as the songs "Dark Hollow" and "Ripple." By the time the set had ended, one could only regret the fact that the group has spent the last few years
playing strictly electric. The dearth of new material in the first set was quickly made up for when the band began the second set with "Alabama Getaway," a song from their most recent album, Go to Heaven. By the time the group finished the set with "Weather Report Suite" leading into "The Deal," it was near midnight, and the Dead had performed what to most bands would be considered a full evening of music. What was to follow, however, was one of those magical closing sets in which the Dead played straight through for about 90 minutes without ever really stopping between songs. Opening with "Feel Like a Stranger," another song from the new album, the group became highly improvisational, going on to play such songs as "Franklin's Tower," "Estimated Prophet," and "Eyes of the World." It was not more than 10 minutes into the set that the Dead had the Warfield audience under a spell, the combination of Garcia's leads and Phil Lesh's bass lines coming through amazingly clear due to a very fine mix at the soundboard. By the time the set ended with Bob Weir screaming Chuck Berry's "Johnny B. Goode," the aisles
which the ushers has been trying to keep clear throughout the night had become occupied with dancing bodies, and the crowd of 2000 sounded more like a crowd of 20,000. The Grateful Dead having given what they had given, it was almost unjust for the audience to demand more, but before long the group was on stage again, encoring with two old classics, "Uncle lohn's Band" and "One More Saturday Night." As the houselights went on and another Saturday night with the Grateful Dead came to an end, it was clear recent accusations about the group becoming lazy and apathetic have obviously been coming from the mouths of people who only listen to Dead records without seeing the group's concerts. Rather than doing three weeks' worth at a small theatre, the group could well have chosen to celebrate their fifteenth anniversary by doing one big outdoor show, a move which certainly would have been a lot easier on the band members as well as a great deal more lucrative. The Grateful Dead still enjoy playing music and they still give a damn about the music they play; as long as they continue to do so, they'll surely be around foranotherls.
The Grateful Dead: still around 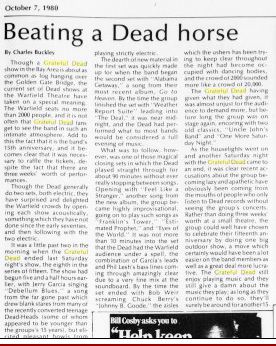 This is the final of the 15 San Fran shows (15th of the 25 Fall '80 monster shows in San Fran>New Orleans>NYC). It's also in the top 5 of these shows. I'm surprised there are complaints about these runs; they seem to be of two types:
*They repeated too many songs
*The format was too different
Yes, if you did 15 shows in a row, then you got beaucoup repeats. Try 15 shows in, say '68 or '72. The format was intentionally different. The band wanted some style agitation and thought it would be fun to have an intimate setting, fomenting tighter songs. It wasn't an Arista aquiescence. One of the working ideas was a 15-year mark, special reward for the fans.

First Set. Like many of this run, the acoustic set surpasses even '70 acoustic sets. Outta the gate, Dire Wolf & Dark Hollow are A+ versions. The rest is consistent; above average for the Warfield shows, a specialness in the air.

Second Set. Decent start but really heats up from Friend of the Devil all the way through Little Red Rooster - particularly M&MU and a great Candyman. Then it hits outright X-factor with Let it Grow>Wheel>Music Never Stopped (the latter uptempo and sparkly). These just might be their best examples from the tour.

Third Set. Still on top of it - one of the best of '80. Unlike the second set, which keeps getting better, the 3rd is like the 1st set - best right out of the gate (well, really at Fire), but above average throughout. The jam into Terrapin and the first Playin' jam are worth the penny. Then Graham served champagne to the entire audience so they could toast the boys.

Highlights:
Dire Wolf - Very warmed up on this one at this point
Dark Hollow - many good examples from the shows
Little Red Rooster - '80 was a good year in general for Roosty
Let it Grow>The Wheel>The Music Never Stopped - wish the whole sequence was officially released
Fire on the Mountain - Scarlet's not bad but the Fire is nice
Estimated Prophet - strong
U.S. Blues>Brokedown Palace - great care taken to not throwaway the encores

SOURCES: Four of the acoustic songs are on Reckoning, (China Doll, All Around this World) however Bird Song has a 37sec edit right before the solo, and Cassidy has 1:06 removed from the solo @3:54. Music Never Stopped is on So Many Roads. Use the Stanley/Blackwood source for the first two acoustic songs. The rest of the 1st set (+ Alabama) is best on the Ellner/Marino(GMB) source. The best SBD souce for the electric sets is currently Gardner3576 (albeit needing NR in places). The current matrix is echoey, thumpy & more AUD than SBD. You have to go back to the AUDs though, for the double encore. In the 2nd set, sound improves again @Little Red Rooster (which has a beginning cut).

CAVEAT: They're not all 5 stars just 'cause we love the band. The Dead played over 2,300 shows; on a bell curve a hundred might be 1-star and maybe 100 are 5-star shows. Shows were awesome. You were life-happy by the time you and thousands of your new buddies skipped and floated out into Shakedown Street. Highlight moments forced you to either reel your mind back or just snip the tether - and cosmic moments didn't occur only inside the show. But that happened even at what are objectively 1-star shows. If you rate every show 5-stars but have no idea what constitutes a 2-star show, it renders the rating system untenable and nobody believes your reviews.

Bucky, these were full, two-electric-set shows. They just had a bonus acoustic set first, and took place in an upscale, downtown vaudeville theater (this was before the seats were removed; you've seen both the run poster and the famed champagne-toast pic) next door to the Crazy Horse. Shit, this one's 35 songs and lasted over 4 hours! That's wasteful?

Glen, plus-one on your story 'cause it put me at the shows. I watched pretty blue-gold skirted spinners in the lobby, whiffed patchouli, weaved tracers in time with my hands aloft & smeared onto the grouphead dynamic. The Cosmic Wimpout story is funny. Truthiness: people did that at runs all through the 80s, too.
Reviewer: jjg4762 - favoritefavoritefavoritefavorite - October 13, 2014
Subject: end of music
Check out how at the end of music Bobby try's to bring it back to Let it Grow. Its a good 2 minutes of him trying to get Jerry to notice. 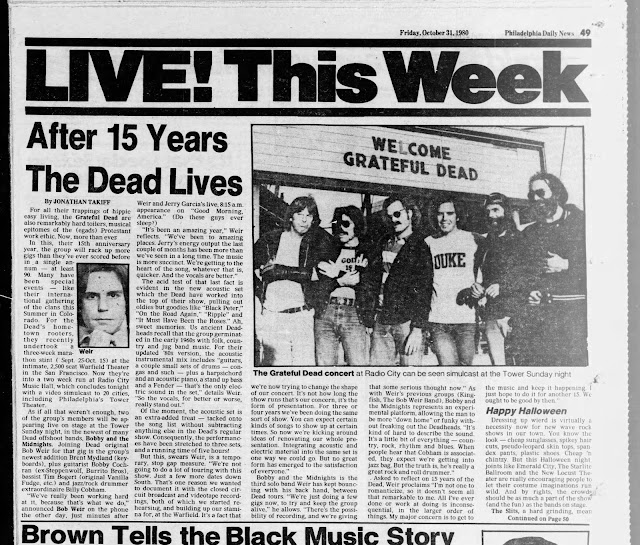 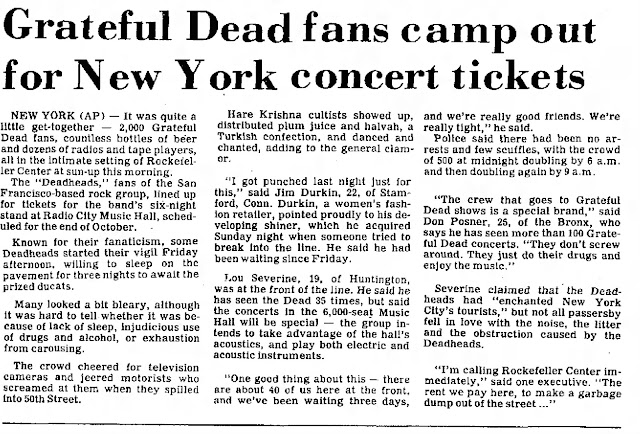