Happy 40th Anniversary Winterland I of 1977.
After two February tune-up gems, The Grateful Dead returned to California for a three night stand at Winterland on March 18-20. (Originally a two-nighter, with an added date) A little known fact (or mistake) is that the Dead were scheduled (or not) at one point to play the another gig at the Shrine on March 27, 1977, an unknown and unperformed show that might have been a gem (or perhaps the real place the Dead played Cornell (ha).

There was a little better-known three-pack in June back at Winterland so I will call these nights The Other Ones.

We all know the shows were fantastic and deserved an eventual release.  As Dick says:

So I will make a 3-4 CD release for you right now. I called it To Terrapin 3 since I would keep all three versions of Terrapin 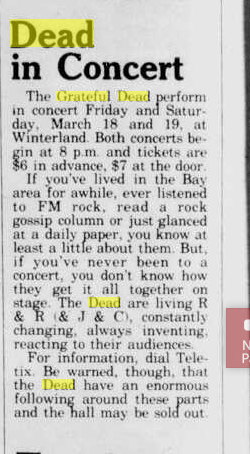 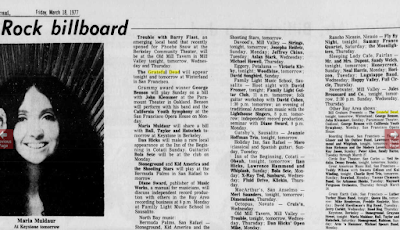 Here's some snarky UK reviews of the time:

Grateful Dead: Wake Of The Flood/From the Mars Hotel

Mick Farren, New Musical Express, 19 March 1977
THE GRATEFUL DEAD have always been a band whose work formed into waves and troughs. Wake Of The Flood is unfortunately one of the low points. After ODing on a slew of multi-record live packages they seemed to lose their funk somewhere along the endless highway that runs from slightly north of the Golden Gate Park clear through to Venus.
Although a very direct descendant of the magnificent Workingman's Dead and the slightly less than magnificent American Beauty, its fault was that it topped too far over into plaintive, post psychedelic country music so beloved by San Francisco soi devant rollickers who had lately retired to the pastoral arbours of Marin County, San Francisco's great hippie suburb.
With no jig-along tracks like 'Uncle John's Band', 'Casey Jones' or 'Truckin' to add a necessary balance, Wake Of The Flood falls into the trap avoided by its predecessors. The vocals are just too wistful, and where once Garcia's guitar soared he simply picks. Sure, it may be superhuman picking, but picking just the same. The rhythms are subdued, and even Robert Hunter's lyrics (and I consider Hunter one of the greatest lyricists this side of Bob Dylan) lack their red dirt robustness.
It may be a great record for those among us who can lay back on the porch and watch the mist coming in across the bay, but for the obtrusive urban environment in which the rest of us find ourselves, the record is just too light-weight.
Mars Hotel, however, is a totally different plate of greens. The spirit is right back there with Jacks on Kings and the hum of the diesels. It may not be drag out rock and roll. That seemed to be left to Bobby Weir on his solo albums. There is, however, the kind of optimistic bounce that is the hallmark of a quality northern California hoedown. The kind of music that's for strutting down the block, talking to stray dogs and grinning at the ladies.
From Kreutzman to Garcia everyone's playing is wide open in comparison to the doleful tightness of the companion record. Even the down tempo tracks like 'Ship Of Fools', although tinged with an easy sadness, have a sturdy edge that most of the cuts on Wake Of The Flood sadly lack. Even Hunter seems back in his stride with a jaunty optimism that draws his imagery from the street, the billboard and other rich lodes of classic pop-folk lore.
Perhaps someone reminded the Dead that their roots lay in a brawling, rumbustious port rather than some lost spiritual eco-Eden. Or maybe they just remembered that their purpose was to create music to get high to.
I doubt the wisdom of re-issuing these two records as a package. The set really does seem to present just too much of the same kind of Dead for one sitting. An ideal proposition would surely have been to produce a comprehensive, historical and, best of all, chronological package like the Jefferson Airplane/Starship's Flight Log or the Stones' Rolled Gold. This would, however, present tricky contractual logistics as their material is split between two (or is it now three?) different record companies.
© Mick Farren, 1977
Citation (Harvard format)
Grateful Dead/1977/Mick Farren/New Musical Express/Grateful Dead: <i>Wake Of The Flood/From the Mars Hotel</i>/02/03/2017 22:50:20/http://www.rocksbackpages.com/Library/Article/grateful-dead-wake-of-the-floodfrom-the-mars-hotel

Chas de Whalley, Sounds, 30 July 1977
TEN YEARS and twelve-odd albums on from when they first hit the streets of San Francisco, the good ol' Grateful Dead present us with their most perplexing elpee ever. After four solid days on my stereo and so many spins half my block must know it inside out, I still haven't the faintest idea what to make of it.
Terrapin Station, you see, is simultaneously the finest and the worst record Jerry Garcia and his boys have ever signed their names to. The finest in that Keith Olsen's production and a strict musical discipline, never previously associated with the Dead, are combined into an album that sounds as slick and smooth as anything Boz Scaggs, the Starship or Steve Miller have offered recently. The worst in that the Summer Of Love is long burned out, it's now the summer of the microwave oven and the dishwasher, and the old acid pioneers, the old dogs of the rock 'n' roll war, simply haven't a tooth or a snarl left in their heads.
Let us get down on our knees once more and mourn for Pigpen. Turn the Lovelight On Again.
But it would be foolish to discount Terrapin Station because it ain't true grit. Why? Because, ironicaliy enough, with this album the Grateful Dead look certain to recapture not only the vast audience held spellbound in those halcyon touring days following Workingman's and American Beauty in the early Seventies, but a whole load more besides. Terrapin Station is one for the coffee tables. Hip jetsetters' delight, almost tailor-made for the big money, hip easy listening market.
And in those terms it's an album that puts your Fleetwoods and Hearts, and whoever else you may care to yawn to, firmly in the shade.
Thus you can forget the first side, 'cos there's nothing too unexpected on it. Keith and Donna Godchaux make the white funk connection (and murder Martha and the Vandellas' 'Dancin' In The Streets' in cold blood), Bob Weir runs his religious propensities through 'Estimated Prophet' and a swamp rhythmed gospel chestnut 'Sampson and Delilah'. (They talk about JJ Burnel's misogyny but how many times now has Weir presented songs that view women as nothing more than temptresses? Think on it, all ye ageing hippies with quivering sensibilities). Last track sees those laconic Dead body rhythms turned on their heads by 'Sunrise'. Donna sings it and it's just like one of those Rita Coolidge only-have-eyes-for-you Love Story weepies!
There ain't a single guitar solo on the whole side and if Jerry Garcia actually sings on it he's hidden far away in the mix. And let's face it, however commercial the songs and however well they're played, the Dead without Garcia ain't the Dead I knew and loved.
But if side one has the hit singles on it, side two will really blow your mind. And by blow your mind I mean blow your mind. Try this for size.
One long track, a Garcia and Robert Hunter composition, called 'Terrapin Station', a look-into-the-flickering-firelight flight of fabulous fancy. Each part subtitled King Crimson style: 'Lady With A Fan'; 'Terrapin Station'; 'Terrapin'; 'Terrapin Transit'; 'At A Siding'; 'Terrapin Flyer'; 'Refrain'.
What's the plot? You'd better ask the terrapins on the cover 'cos Hunter's lyrics start off reworking the Ancient Mariner let-me-tell-you-a-story-young-stranger line, well-flavoured with post acid fables and then mutters off into the night. It's very strange indeed.
And the music? Well, start off with Garcia in the introspective of Wake Of The Flood and then introduce Paul Buckmaster who, with orchestras and choirs, lays first 'Atom Heart Mother', next Gil Evans/Miles Davis' Sketches Of Spain, and then an airy, breezy jazzy theme (like they put on the front of those French TV thrillers they used to serve up serialised, before Blue Peter every Thursday after school) onto a big, dark, threatening chord riff very similar to Loudon Wainwright's tremendous 'Prince Hal's Dirge'.
What an earful, eh?
And it's all done so well. There is some simply masterful playing. They have never sounded so together in their whole lives, nor have they ever been so perfectly in tune.
Which, I suppose, is why, in the final analysis, I don't like Terrapin Station, It's all so well-conceived and executed that the old free-wheelin' bozo bounce has vanished completely. Rather than spark to occasional genius like the old days, the Grateful Dead are now almost boring in their finely-focussed consistency.
And they sure as hell ain't a rock 'n' roll band any more. They're something else again.
© Chas de Whalley, 1977
Citation (Harvard format)
Grateful Dead/1977/Chas de Whalley/Sounds/The Grateful Dead: <I>Terrapin Station</I>/02/03/2017 22:53:49/http://www.rocksbackpages.com/Library/Article/the-grateful-dead-iterrapin-stationi